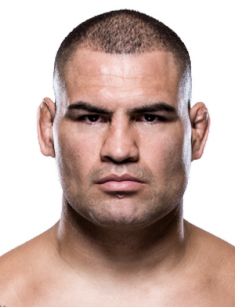 The world famous fighter of mixed martial arts (MMA) in the super heavyweight, two-time UFC winning champion in his weight category, the owner of the black belt on the Brazilian jiu-jitsu and many other honorary awards. The American of Mexican origin has become popular for the improbable endurance and original fight technique due to which he won such eminent rivals as Junior Dos Santos, Brock Lesnar, Antônio Silva, etc.

Cain Ramirez Velasquez was born on the 28th of July, 1982 in Salinas, California. The father of the future fighter, Efrain Velasquez, immigrated to the USA from the Mexican state of Sinaloa, where is located the largest drug cartel in the country. His mother Isabel Velasquez was born in California; she came from Fresno.

Cain grew up in Yuma together with his sister Adela and his younger brother called Efrain Jr. Here, in Arizona, his parents were working at the vegetable plantations and reaping the crop of salad lettuce. Children helped their parents in this process as best as they could. Already then observing how hard his parents got earnings, Cain understood that he had to aspire to some other, better life.

Velasquez received his primary education at Kofa High School. Here he became seriously engaged in the sport: during three years he was playing football as a midfielder and also was the captain of the team. His parents wanted their son to go in for boxing, but Cain preferred the martial arts to it. During the period of the school competitions, the young man won 110 fights of 120 what became his first unspoken record.

Among the youthful merits, It's worth mentioning the double status of the winner in Arizona wrestling championship among the students. Upon the completion of the studies at school, Velasquez entered Iowa Central Community College where he successfully presented his state, having become the champion of the USA in wrestling among the students in the junior league in 2002.

After the college, Cain continued his education at Arizona State University. Being a representative of Sun Devils university sports national team, the guy had 103 fights from which he won 86. Moreover, he became the two-time champion of the USA in wrestling among the students from Arizona state in 2005 and 2006. When he graduated from Arizona State University, Cain went to San Jose where he entered American Kickboxing Academy and grounded himself in the decision to become a professional MMA fighter.

Velasquez had his debut in the mixed martial arts on the 7th of October, 2006 when he appeared on the ring in the fight against Jesse Fujarczyk in Strikeforce tournament. In the first round, Cain managed to leave his rival in the technical knockout. The beginner showed the same result in the fight with unbeatable Jeremy Constant in BodogFight: St. Petersburg tournament just on the fourth minute of the fight.

A year later after training at the academy, Cain received the blue belt at Brazilian jiu-jitsu championship. After that he debuted at UFC tournaments (Ultimate Fighting Championship): in 2008 there was a fight against the same debutant - Australian Brad Morris. In this fight, Velasquez demonstrated his individual style of fight and won the competition after the crushing knockdown.

After these two victories, Velasquez began to be considered the aspiring star of MMA fights. But the Mexican decided to prove that he was able to do more and continued the series of triumphal fights. In a short time he strengthened his positions with new achievements he won the Irish fighter Jake O'Brien, and after that in 2009, he won European Denis Stojnic who became the first who managed to stand against Cain till the second round but at last found himself in the technical knockout.

Velasquez defeated some more serious rivals among whom there were such names as Cheick Kongo, Ben Rothwell, Antônio Rodrigo Nogueira before he was offered to fight for UFC champion title in 2010.

The fight against the popular rival who was the defending champion Brock Lesnar, finished with unconditional victory of Cain despite the fact that Lesnar considerably surpassed him by physical characteristic and power: the Mexican is 185 cm, tall and he weighs only 100 kilos while his rival is 191 cm tall and weighs more than 120 kilos.

Having won Lesnar in the first round with the technical knockout, Velasquez received his first UFC champion title in heavyweight in his biography.

"I have always competed with the guys who were bigger than me. And I have always shown by best in the fight against them …", - Velasquez remembers now.

However, the victory cost the Mexican a serious injury. After the operation on the broken-off right shoulder, he came back on the ring only in the autumn of 2011 to prove his champion title in the fight against the Brazilian fighter Junior dos Santos. However that time Cain's luck was elsewhere, and dos Santos knocked him out. His rival received the title of the superheavyweight champion.

In the interview after the match, the ex-champion said that he had lost his shape because of the rehabilitation after the operation, but he promised his fans to return his honorary title in the soonest time. Before keeping the promise, Cain took part in the very important fight in his life against the Brazilian superheavyweight Antônio Silva known under the nickname Bigfoot, who is famous for the fact that he left unbeatable Fedor Emelianenko in the knockout.

During the fight, Cain cut his rival's head, and the competition turned into the bloody scene. Silva also injured Mexican'' hand, and despite this fact, the latter managed to knock out Brazilian heavyweight.

On the 29th of December of 2012 dos, Santos and Velasquez again fought for the champion’s belt. Cain appeared in the Octagon in good shape and from first minutes started dominating. Though, dos Santos managed to stand against him during five rounds before he was defeated. The fight resulted in the triumphal victory of Cain, in such a way he returned his title. A year later, in 2013, dos Santos again made an attempt to return the belt, but he again lost to the titled Mexican.

During the years 2012-2013 Velasquez was at the peak of his career. He was inspired with the success he even made a tattoo in the Gothic style "Brown Pride" on his chest.

"When I was a child, "Brown Pride" meant "the Mexican pride." I made a tattoo so that the people knew: I am Mexican and I am proud of this!", - the fighter explained.

The experts explain Velasquez's success with the special approach to the fighting technique. If to compare Cain with other fighters, he manages to make 7.5 more blows.

In spring of 2014 UFC announced that Cain Velasquez and Brazilian fighter, the ex-world champion according to UFC version in heavyweight Fabricio Werdum, were chosen as participants of the duel within the first tournament of The Ultimate Fighter: Latin America. The fight was set for the 15th of November, 2014.

However, because of the operation on the torn meniscus Cain, the fight was held on the 14th of June, 2015 in Mexico. The fight in which Velasquez was considered to be an indisputable favorite unexpectedly resulted in the defeat of the Mexican. Werdum knocked the fighter down in the middle of the third round. Velasquez was recovering after the defeats and injuries during a year and in the summer of 2016 appeared in the octagon and won the American Travis Brown. The Mexican started preparation for the rematch with Werdum in 2016, though the commission didn’t allow Cain to take part in the fight for health reasons.

There appeared the information about Cain’s personal life after his appearance in public with his girlfriend, Michelle Borkes in June of 2007. A month later the couple confirmed their serious relations. And on the 6th of May, 2009 Michelle gave birth to their firstborn – daughter Coral Love Velasquez.

The fighter proposed to Michelle on the 23rd of February, 2010 during the romantic walk along Bondi beach in Australian Sydney. And on the 28th of May, 2011 in Arizona the lovers got married.

In 2018 there appeared the information that UFC ex-champion in heavyweight Cain Velasquez visited training with the participation of WWE wrestlers. WWE is an organization which competes with UFC and opposes wrestling to MMA fights.

"Yet there are no grounds to assume that Velasquez will change MMA for wrestling, however in octagon he hasn't appeared for more than two years", - the sport's observers have written.

In September of 2018, it became known that Velasquez helped Russian UFC champion in featherweight - Khabib Nurmagomedov to prepare for his fight with the Irish UFC fighter - Conor McGregor. The Russian fighter announced about it himself on his Instagram, having published a photo from the training. 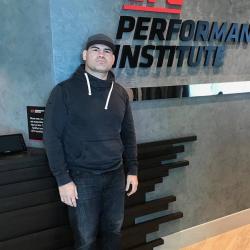