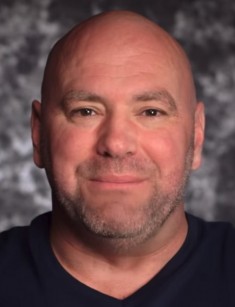 Dana White is the famous president and co-owner of the Ultimate Fighting Championship, the organization that holds mixed martial arts (MMA) fights. White is called the MMA king for his unquestioned credibility and international popularity. The man’s biography shows how a little-known sport turned into the multi-billion global business.

Dana Frederick White Jr. was born on July 28, 1969, in Manchester, Connecticut. His father left the family early, and the half-Irish mother, June, had to bring up two children alone.

Life was difficult for the family. To improve the situation, June, Dana, and his sister Kelly frequently moved. The future millionaire spent his childhood in Las Vegas, Texas, and small towns Levant and Hermon, Maine. White graduated from school in Hermon and entered one of the prestigious colleges in Boston in 1987. However, studying was not a matter of the primary concern: money, entertainment, and sport were more important to Dana. He got hired as a nightclub guard and visited aerobics and boxing sections in the afternoon. The college did not tolerate the student’s absence and expelled White during his second year.

To earn his living, the young man worked as a doorkeeper and bartender; at the same time, he was engaged in amateur boxing. However, he estimated his chances to succeed and gave it up. In his interviews, he emphasized that he was not afraid to fight on the ring, but the professional success required a person to devote their whole life. White added that he saw 35-37-years-old men who did not get anything from sport, so he did not want to be one of them.

Later on, Dana became an aerobics instructor. He understood that job could not bring him enough money and created a complex of exercises that combined boxing and aerobics techniques; he began to teach women and teenagers. Many people were eager to participate, and Dana founded his first company. In 1992, he employed and taught several coaches and opened three Dana White Enterprises gyms.

With this regular source of income, White started conquering the world of big sports. He learned jujutsu and boxing management. The man wanted to become a promoter, but the problems with the fiscal authorities began. The entrepreneur closed his business and moved to Las Vegas.

White found his old school friend Lorenzo Fertitta there. Similar to his elder brother Frank, Lorenzo was a passionate fan of boxing. White tried to enter the sphere of boxing management, but it was impossible without money and connections. Thus, the man drew his attention to new, developing sports and began to promote several MMA fighters.

At the beginning of his career, Dana did not hesitate to use all methods: he even organized illegal street fights which actually had no rules. He confessed he did nasty things; however, money was money at that time. White believed it was necessary to get rid of the ideas about honesty and justice; otherwise, businesses failed. He often expressed this idea in his interviews.

In the course of time, the man became a recognizable figure in the MMA world; fighters respected him for his professional qualities. The famous award-winning champion Tito Ortiz, Chuck Liddell, and other sportsmen were under White’s guidance.

They all belonged to the UFC, but the organization could hardly be considered a reputable promoting center. The manager did his research and discovered that Semaphore Entertainment Group, the founder of the UFC, was close to bankruptcy.

Dana suggested Lorenzo and Frank Fertitta they should buy the loss-making company. At that time, the brothers inherited a casino chain from their father. Dana persuaded them that MMA would become the future of martial arts. In January 2001, Bob Meyrowitz, the owner of Semaphore Entertainment Group sold the company; Dana White became the new UFC president.

The President of the UFC

First and foremost, White took care of promoting. He needed to receive the legal permission to hold fights, but many states refused to do that because of the barbaric rules. Thus, Dana introduced several prohibitions: crotch kicks and kicks to a lying opponent’s head. Besides, rounds were limited in time.

To make MMA popular, the UFC president participated in the global marketing politics: he signed the agreement with the cable TV channel Spike TV to broadcast fights. Tito Ortiz, Chuck Liddell, and Matt Hughes were the first UFC stars. Little by little, the situation improved, yet it was not enough to pay the old debts.

Dana White took another promoting step. In 2005, together with the Fertitta brothers, he launched a reality show The Ultimate Fighter on Spike TV; broadcasting cost $10 million. In this show, 16 athletes lived in the same house and participated in fights; as they lost, they left the program. It was the real breakthrough. Millions of people all over the world watched live the final fight between Forrest Griffin and Stephan Bonnar. UFC turned into a prosperous company, and MMA became trendy.

In 2005, Dana White was named the promoter of the year; he won the consecutive victories until 2013 and repeated his achievement in 2015-2016. As the UFC leader strengthened his position, he began to destroy his rivals: WEC and Pride. Nothing prevented UFC from introducing its conditions to MMA.

Fame influenced White’s behavior: he became a scandalous, rude person. He insulted not only UFC fighters but also official bodies. He publicly offended LGBT people and had to apologize; his conflict with a Sherdog journalist was also spoken about. Besides, he argued with Japanese and Russian promoters.

In 2016, the Fertitta brothers stopped owning the UFC: it was sold to WME-IMG for $4 billion. White also received his percent of the deal and increased his fortune; today, he owns $500 million. The new UFC owners kept White as the president. The man promised to govern the company for several years; in his opinion, this purchase turned over a new leaf in the history of the UFC.

The promoter keeps his personal life secret. He met his future wife at school in Las Vegas; they married in 1996. The couple has a daughter and two sons one of which bears much resemblance to his father in his youth and debuted in professional boxing in 2018.

The UFC leader’s relationship with his mother is complicated. In 2011, the woman published the book Dana White, King of MMA and revealed that big money spoiled her son. She underlined that he forgot his relatives; according to the book, he left his grandmother to die in a trailer. At the same time, White is known for his charity work and help to diseased children.

The famous fight between some of the strongest lightweight athletes, the Russian Khabib Nurmagomedov and the Irish Conor McGregor, is one of White’s recent projects. The promoter highly appreciates McGregor’s talent and compares him to Mike Tyson and Muhammad Ali.

The fight took place in October 2018; the Russian athlete won.

Dana White comments on the majority of fights on his Twitter and Instagram pages and posts many photos. 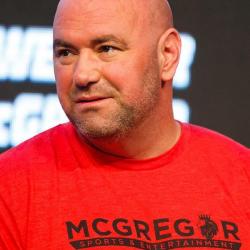