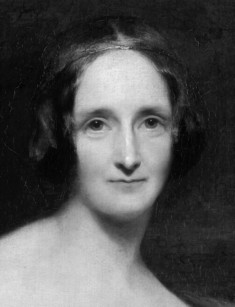 The English writer Mary Shelley is known as the author of the novel Frankenstein; or, The Modern Prometheus. Her life bore some resemblance to that of Victor Frankenstein: happy moments intertwined with sad troubles and tragic events. The woman buried her husband (the poet Percy Bysshe Shelley), parents, four children, and two sisters, yet she believed in the power of art and talent until her last days.

Mary Wollstonecraft Godwin was born on August 30, 1797, in London. The political philosopher William Godwin and the famous feminist of the 18th century Mary Wollstonecraft were her parents. Mary’s daughter from the first marriage with the speculator Gilbert Imlay, Fanny Imlay (1794), was also raised in this family.

In a month after the girl was born, the mother died of intrauterine inflammation and left the kids to Godwin’s care. The man was deep in debts. As he felt he could not support two daughters, William began to look for the second wife.

In December 1801, Godwin married Mary Jane Clairmont, a well-educated woman with two sons, Charles and Claire. The majority of William’s friends did not like the new wife – they saw her as a hot-tempered and irritable person. Mary’s relationship with her stepmother did not work out as well: Clairmont paid attention to her own children and ignored Godwin’s girls.

The marriage did not improve the family’s economics: William had to take on loans to pay his old debts. Because of the poverty, Mary did not receive a proper education. The father took his daughters to learning events and allowed them to borrow books from a library. Sometimes, Godwin’s famous guests, for example, the poet Samuel Taylor Coleridge, shared some fragments of knowledge with his daughters.

In 1811, Mary spent six months in a boarding school in Ramsgate. The next year, in June, the father sent her to live in Scotland, to the family of the British botanist William Baxter. In his diary, Baxter mentioned that Mary was brought up like a philosopher and even a cynic. The young woman stayed with the botanist twice; on March 30, 1814, she came back home.

The romance with the poet Percy Bysshe Shelley and the friendship with George Gordon Byron reflected in the writer’s works. Once, the three of them were sitting around the fire and telling scary stories to each other. Byron suggested everybody should create a story about ghosts. The same night, the young woman had a dream: a pale scientist was making a mutilated creature from different parts; it was alive.

Mary planned to write a short story based on her dream. Percy helped her extend her idea and turn it into a full-fledged novel. On January 1, 1818, the writer’s debuting and most famous book Frankenstein; or, The Modern Prometheus. The first edition consisted of 500 copies; it was anonymous. Readers believed that Percy Bysshe Shelley, who wrote a foreword and addressed Mary and her father, was the author.

The second edition of Frankenstein was presented on August 11, 1823; Mary Shelley’s name was marked on the title page. The third edition of the novel that came out on October 31, 1831, was the most wide-spread. The new foreword appeared: Mary told the glorified version of the story’s origin.

Many plays, musicals, screen versions, and radio shows based on Frankenstein have been created. The 1931 movie under the same title is the classic work. The image of the monster with the flat top of his head, glass-like eyes under drooping eyelids, screws in his neck, and tallness are iconic.

In 1819-1820, Mary created the novel Matilda; because of the suicide and incest themes, it was published only in 1959. One could hardly expect the writer, who had to face the death of two small children, to present something more positive. At the same period, she worked on the historical novella Valperga: or, the Life and Adventures of Castruccio, Prince of Lucca.

In 1826, Mary’s second considerable work, the novel The Last Man, came out; however, it failed to surpass Frankenstein. The story is set in 2073. People ride horses, ships sail, people use firearms at war, and airships are the fastest means of transport.

The novel consists of three volumes each of which tells about the different stages of the main characters lives: Lionel Verney, his son Perdita, Prince Adrian, and his sister Idris. In the first volume, the characters grow up; Shelley focuses on the political situation in the world. In the next part, the city is threatened by a plague. In the third volume, the disease is progressing and destroys the humanity.

In the 1830s, Shelley published the novels Perkin Warbeck (1830), Lodore (1835), and Falkner (1837); she also wrote articles for women’s magazines to earn her living. In 1836, Mary’s father died; he gave her the commandment to publish his memoirs. Although the daughter began to embody this idea, she dropped it two years later.

Thanks to the writer, Percy Bysshe Shelley’s works had become famous by 1937: Mary published his poems in newspapers and her own texts. In a year, a large publisher Edward Moxon presented the collection of his works with long bibliographical references.

Percy Bysshe Shelley, Mary’s future husband, supported William Godwin’s views described in Political Justice (1793). The poet became his great friend and even promised to repay his debts. However, Shelley’s noble and wealthy family refused to give Percy a loan because of their personal resentment to Godwin’s books. After months of promises, the young man admitted he could not help financially. The philosopher felt he had been betrayed and broke the friendship.

Mary and Percy frequently saw each other in Godwin’s house and got attracted to each other. They were meeting secretly at the grave of the woman’s mother; they made a declaration of love there. According to Mary’s diary, it happened on June 26, 1814. The next day, she told her father about her relationship with Percy; to her consternation, he protested.

On July 28, the couple fled to France; Mary’s sister, Claire, accompanied them. Shelley’s lover, Harriet Grove, who was pregnant with her second child at that time, was left in England. Two years after her son Charles was born, she drowned herself as she could not stand her life. During the travel, Mary also got pregnant. When the impoverished lovers came back home and asked Godwin for help, the father did not want to have anything to do with his daughter.

Percy left pregnant Mary at home and entertained himself with Claire who became his lover. In her turn, Mary found comfort with Thomas Hogg, the lawyer and Percy’s close friend. However, the couple’s life was not damaged: both believed in free love and adored each other.

On February 22, 1815, Mary gave birth to a premature baby girl who died on March 6. The woman got depressed; she saw the child everywhere. The dream of having kids came true the next year: on January 24, 1816, Percy’s offspring, William, was born. From that moment, Mary asked to call her Missis Shelley.

On December 30, 1816, the couple married. On September 2, 1817, Mary gave birth to the daughter Clara. Both children were not meant to live: in September 1818, Clara died; in June 1819, William passed away. Shelley was depressed for an extended period. On November 12, 1819, Percy Florence was born; he became the only child who survived.

On February 27, 1819, Percy Bysshe Shelley declared himself the father of Elena Adelaide Shelley who was allegedly Mary’s daughter. However, it is unknown who that child was; Claire might have given birth to her from Byron.

On June 16, 1822, Mary was on the edge of death: she miscarried and lost a lot of blood. The woman was saved by her doctor who had put her in a bath full of ice. Several days later, another tragedy followed: on July 1, Percy Bysshe Shelley and his friend Edward Williams died in a shipwreck. Water carried their bodies to the shore ten days later. Shelly was cremated at that very place.

In 1826, the American actor John Howard Payne proposed to the writer. Mary refused and said she had already been married to a genius, and her next husband should be equally talented. Later, the French writer Prosper Mérimée, the biographer Edward John Trelawny, and the politician Aubrey Beauclerk tried to earn the woman’s love, but none of them succeeded.

In the 1840s, Mary Shelley lived with Percy’s son Florence; in 1848, Jane Gibson, Florence’s wife and the illegitimate daughter of the American banker Tomas Gibson, joined them.

From 1849, the writer had migraines, and her body was paralyzed sometimes. Shelley was ill for two years. She died on February 1, 1851, at the age of 53. The brain cancer was probably the cause of death.

According to Mary’s last will, she should have been buried near her parents in St. Pancras, London. However, the condition of the cemetery left much to be desired. Jane Gibson buried her mother-in-law at St. Peter's Church, Bournemouth.

The next year after the writer’s death, her desk drawer was opened, and its content was revealed: Mary’s dead children’s locks of hair, the exercise book with several unknown poems presumably written by Percy Bysshe Shelley (it was his handwriting), a handful of dust, and a piece of his heart. 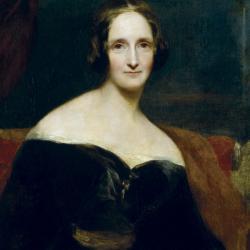