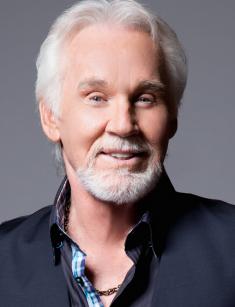 Kenny Rogers is an American musician, singer, composer, and actor; he has created more than 120 singles of various music genres. Some 100 million copies of Rogers’s albums have been sold worldwide. The artist is the winner of Grammy, ACM, and CMA Awards; he is the favorite singer of all time according to Today and People magazines. As the man finished his music career, he became an entrepreneur and opened the Kenny Rogers Roasters restaurant chain.

Kenneth Ray Rogers was born on August 21, 1938, in Houston, Texas, into a large family of the Irish and Native American origin. The mother, Lucille Lois Hester, worked as a nurse, and the father, Edward Floyd Rogers, was a carpenter.

The boy went to the Wharton Elementary School; as a high-school student, he organized the group Scholars. Since that time, music has been an integral part of Rogers’s life.

The artist began his solo career in the late 1950s. Young Kenny preferred rock’n’roll and psychedelic music; as he grew older, he switched to the country genre and earned people’s recognition for performing American folk songs.

The song “That Crazy Feeling” recorded in the late 1950s became the musician’s first hit: it sounded on the radio and proved to be a commercial success. When the sales dropped, Kenny joined the jazz group Bobby Doyle Three as a bass guitar player; he contributed to the recording of the band’s album released on Columbia Records.

In 1965, when Bobby Doyle Three split, Rogers collaborated with Mickey Gilley and Eddy Arnold. The next year, he joined the folk group New Christy Minstrels as a vocalist and contrabass player. The new group did not meet the expected results, and Rogers, as well as other members, left the project to start a new one: The First Edition. They recorded many hits that topped American pop and country charts.

In 1976, Kenny began his solo career and signed a contract with United Artists. The debuting album Love Lifted Me did not make the singer popular. Kenny remained on the periphery of the country music world until 1997 when his single “Lucille” topped music charts in twelve countries and made the second album the leader of Billboard Country Album Chart.

As Rogers earned his recognition, he released the multiplatinum album The Gambler; the songs “Coward of the County” and “She Believes in Me” remain popular today. In the late 1970s, the singer collaborated with the legendary country singer Dottie West and recorded a series of albums. The celebrities won two CMA Awards and had two Grammy nominations; besides, the albums Every Time Two Fools Collide and Classics received Music City News Award.

The next several years, stadiums were filled in when the duet gave concerts. The songs “Anyone Who Isn't Me Tonight”, “What Are We Doin' in Love”, “All I Ever Need Is You”, and “Till I Can Make It On My Own” became the classic country hits and went down in history of the international music. Later, Rogers marked in the biopic about Dottie West that the woman’s contribution to their success was immense: she performed so emotionally that nobody could remain indifferent.

In 1980, Kenny Rogers started cooperating with Lionel Richie, the pop singer who wrote and produced the super hit “Lady”; this track brought the greatest commercial success in Kenny’s career. The musician spent the money he gained from the sales on the music video; besides, he bought real estate property in Los Angeles and opened the most up-to-date recording studio.

In 1983, the singer recorded a duet album with Barry Gibb from Bee Gees and legendary Dolly Parton. “Eyes that See in The Dark” became platinum: two million copies were sold. The song “Islands in the Stream” peaked Billboard Hot 100.

The next few years, Rogers wrote songs that topped the country’s music charts. In 1985, the star participated in the recording of “We Are the World” to support starving African children; besides, he gave a concert at Giants Stadium.

In the 1990s, the musician’s career was marked with a calm period that lasted until the single “Buy Me a Rose” and the collection 42 Ultimate Hits. In 2006, the long-awaited solo album Water & Bridges came out and celebrated the 50th anniversary of the musician’s career. The song “Calling Me” with Don Henley became a hit and had a 2007 Grammy nomination.

Further on, the musician was involved in rereleasing the old compositions and worked on the new material that appeared in the album You Can't Make Old Friends. Kenny collaborated with Dolly Parton again; they became good friends throughout the previous fruitful years. The song reached number 57 in Billboard; it was re-recorded for the woman’s album. Besides, Rogers found himself as the member of the Country Music Hall of Fame and took part in the Glastonbury festival.

The man announced his retirement in 2015 and had the good-bye tour, The Gambler's Last Deal. The final concert took place in Nashville on October 25, 2017, at the Bridgestone Arena. Linda Davis, Lionel Richie, Justin Moore, Dolly Parton, and other stars participated in the show.

Rogers did not limit himself to music: he also worked on movies and TV projects. The artist was a host and narrator in the series The Real West. In the 1980s, Kenny took an interest in photography and created the art albums Kenny Rogers' America (1986) and Your Friends and Mine (1987).

In 1991, the musician opened the Kenny Rogers Roasters restaurant chain advertised in the comedy show MADtv and Late Night with Conan O'Brien.

The singer has always been popular among women; he married and divorced many times. Janice Gordon, Jean Rogers, Margo Anderson, and Marianne Gordon used to be married to him. The man treated each of his women with respect, but frequent tours and concerts destroyed their families.

In the late 1990s, the musician met the waitress Wanda Miller and proposed to her soon. The couple married on June 1, 1997. The woman made a loving wife and gave birth to two children, the twins Jordan and Justin.

The spouses live in a beautiful mansion in Georgia. When Kenny retired, the couple started land-use planning and doing their own business.

In 2019, Kenny Rogers was included in the list of 35 richest actors; he earned a net worth of $250 million. Today, the man spends all his time with the family while art and enterprise activities are secondary.

The musician says that close people’s wellbeing and togetherness are the key components of a happy life.