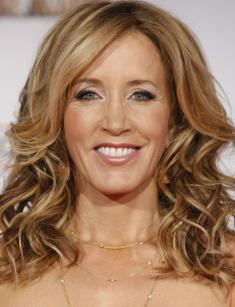 Felicity Huffman, famous for the role of Lynette Scavo in the popular series Desperate Housewives, unlike most Hollywood stars, managed to succeed both in the profession and in her personal life.

Felicity Kendall Huffman was born in December 1962, in the American city of Bedford, New York. The future actress grew up in a large family, but without a father. Her father, who worked as a banker, left the large family when the girl was a year old. At that time, there were already seven daughters and a son.

Their mother, Grace Valle raised the children. The influence of the mother on the youngest daughter turned out to be decisive in Felicity's life. Grace Valle was an actress. Grace often took her daughter to the theater, and the girl regularly saw mother's acting. The example of her mother inspired Felicity Huffman, and over time, she chose the same profession.

Felicity Huffman made her debut on the stage in the early 1980s. She gradually developed acting skills, and soon the actress was invited to Broadway theaters. In 1988, she was given the lead role in the play Speed the Plow. This work was notable for the fact that Huffman replaced Madonna herself. The image of Felicity resembled Madonna's one. They are both blonde and petite (Madonna's height –5'4'' /163 cm, and Huffman's – 5'5'' /165 cm).

In the same year, Felicity Huffman made a debut in cinema. The actress made her debut in two melodramas Things Change and Lip Service. The girl was given secondary roles. Despite working on the set of these movies, the actress did not quit her job in the theater.

In the early 1990s, Felicity Huffman regularly got offers to play key characters. First starring role for the actress was the role in the TV series Golden Years by Stephen King. After the release of this mini-series, the actress had got many tempting offers.

The actress had every hour filled in advance. A series of popular projects appeared on the screen. In the movie Quicksand: No Escape Felicity starred opposite famous Donald Sutherland. Later, she participated in such successful projects as Raven, Early Edition, Law & Order, and The X Files.

But film career was not the one Huffman was developing successfully, theater-goers no less appreciated the actress. In the mid-1990s, Felicity Huffman received the prestigious theater award Obie for her role in the play The Cryptogram.

From 1998 to 2000, a popular series called Sports Night with Huffman in a major role was released. According to numerous critics, this series was the best project of that time. Felicity's acting was recognized masterly. For her acting Huffman has received multiple awards, the most significant among them is a Golden Globe Award.

After a number of projects with her participation, many of which were adequately appreciated by the audience and critics, Felicity Huffman played a starring role in the famous series Desperate Housewives. The actress got the role of Lynette Scavo and was again showered with many awards and prizes, the most prestigious of which are Emmy and 3 Screen Actors Guild Awards.

It is noteworthy that Felicity was the only one of all the characters who received Emmy. A complex and tragic role developed by the fourth season contributed to the success of the actress. Lynette Scavo is a mother of many children, which already makes the character of Felicity Huffman multifaceted, with complicated problems and experiences.

But in the fourth season, a serious illness occurred in the list of parental problems. In this season, Lynette was diagnosed with cancer. The woman agrees to chemotherapy, which leads to the fact that she has lost all the hair. The bald character shocked viewers accustomed to the more aesthetic and easy melodramatic tone of the series. Some viewers were dissatisfied with this plot twist, and criticized the writers for excessive naturalism and said that in this series fans were not waiting for the truth of life and drama.

In the media, there were rumors that Felicity Huffman shaved for the role, but this information was false. Although it became a trend among actors to radically change their appearance for roles, Huffman refused to shave her head. Makeup artists made for the actress a silicone pad and put a lot of effort to ensure that the painful look of Lynette seemed authentic. Nevertheless, the hard fate of the heroine helped the actress to demonstrate her own talent even more clearly.

Desperate Housewives were on the screen from 2004 to 2012 and enjoyed great popularity in the world box office.

During this time, the actress managed to star in another great project that helped the actress to gain more popularity. This is a comedy-drama movie called Transamerica, which brought Felicity Huffman recognition as one of the best actresses of 2005. There Felicity had to transform into a transsexual. The role brought a nomination for Oscar.

Among the latest movies with a participation of thw Hollywood star is the drama Georgia Role, as well as Phoebe in Wonderland and the series anthology American Crime.

William Macy, a talented colleague of the actress, became her husband. The couple had been living in civil marriage for 15 years, and in the autumn of 1997, they decided to get married.

In the summer of 2000, the couple had a daughter, Sophia Grace Macy. And two years later, the star parents gave birth to a second baby, girl Georgia Grace Macy. In the early 2000s, the actress stopped continuous work on filming and devoted her free time to children. However, Felicity couldn't stay without work for a long time and came back in acting.

On May 7, 2012, there was a fantastic event in the career of a married couple. The actors became the owners of a double star on the famous Hollywood Walk of Fame.

Felicity Huffman's personal life was a happy one. She has beautiful children and an understanding and caring husband. Family photos regularly appear in the Instagram account of the actress: preparing for the holidays, family weekend, photos with children. Huffman also posts photos from the stage and set. The actress has 350 thousand followers.

In December 2017, fans of the popular, but long-ended television series Desperate Housewives again started talking about the return of the series on television with a new season or even on the big screens as a full-length film.

According to Mark Cherry, the creator of Desperate Housewives, the director continues to receive many letters written by fans of the series who ask to release a sequel. That's an argument to restart the series.

The argument against it is that Desperate Housewives ended as a confident and logically completed series, and so the writers would have to bind the continuation to this point, which may result in a weak plot of the new season.

While producers are only thinking about whether to restart this project, ABC does not deny the possibility that the shooting of the Desperate Housewives will be ordered. Representatives of the channel have already held preliminary talks.

Felicity Huffman, as well as Eva Longoria and Marcia Cross, have already publicly announced their consent to participate in the filming. The only problem is that the fourth actress, Teri Hatcher, who played the role of Susan, doesn't even want to hear about the series. But if a problem with a cast and script will be resolved, the fans have high chances to see the continuation of Desperate Housewives.