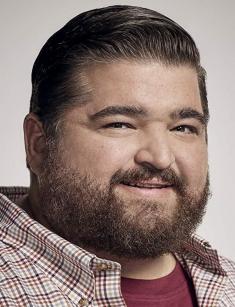 The kindly face of the big man Jorge Garcia was recognizable thanks to his participation in the filming of the cult series Lost. Before the actor starred mainly in advertising and comedy shows and was his own for millions of viewers, performing the role of Hugo Hurley Reyes. His doesn`t differ either in intelligence or beauty but brought humor and humanity to the project. He could laugh, touch and surprise with equal success. This ability allows the actor to get main and episodic roles in interesting projects.

Jorge Garcia was born in 1973 in Omaha, the largest city in Nebraska. The actor's family comes from Latin America, his mother is Cuban and his father is Chilean. Jorge speaks perfect Spanish but feels American. The artist spent his childhood in California, in the town of San Juan Capistrano.

The boy showed his acting talent even at school, participated in theatrical productions, sang on the stage. The guy succeeds especially well in comedies. Another school hobby of Jorge was wrestling. The big man with a kindly smile made a splash in the ring and was nicknamed “Baby-Faced killer.”

After school, Garcia goes to the University of California in Los Angeles and receives a diploma with a Communication Studies major. The artist admits that he went to school only to calm his parents. He continued to dream about a career as a movie star and at the same time studied acting courses in the Beverly Hills Playhouse.

After graduating, Jorge continues to live in Los Angeles and continually goes on auditions. The period of unsuccessful trials lasted for six years. During these years, the guy worked at a chain bookstore. In his youth, he took a job in fast-food restaurants to stay close to the fat and junk food, which he adored since childhood.

From time to time, the actor starred in commercials. He says he felt famous for the first time after a role in the fast food commercial Jack in the Box. It was the moment when strangers suddenly began to smile and greet him in the streets. But the dream, which he even wrote down once in the list of plans and hopes, was a role in a comedy.

The actor's biography of Jorge Garcia began with a small role in the crime drama Raven's Ridge in 1997. In the early 2000s, the artist plays characters in the series, including the famous detective Columbo. The first show, in which the hero Jorge stayed for several episodes was Becker, where the actor starred in 13 episodes.

In 2004, the charming big man managed to light up in the comedy series HBO Curb Your Enthusiasm. He played a drug dealer in the popular project and he was noticed by the producers of the series Lost and was invited to audition. Garcia admitted that he agreed to any role but the creators of the future hit saw in the guy remarkable potential and came up with a character Hugo Reyes specifically for him.

A good-natured and funny guy won the heart of the audience with his spontaneity and was one of the favorites of the audience. He was in the project until the very end, taking part in 108 episodes. Hugo remained reasonable and positive, encouraging and inspiring brother in arms, in the moments when hopelessness and aggression covered the island.

The American rock band Weezer even named the album after the hero: the disc Hurley, which was released in 2010 with Jorge's face on the cover. He had the audience's love of Lost and financial prosperity at the same time. If the artist had $40 thousand at the beginning for one episode, his amount increased to $80 thousand by the end.

His professional recognition was also important: Garcia received the Scream Award for Best Ensemble in 2006. It is his only award in his career. The character allowed to reveal many facets of talent, not limited to the comedy component. Perhaps that is why after 2010, when the project was completed, the actor continued to receive offers to shoot.

Jorge Garcia gets the main role in the detective show Alcatraz. He plays Dr. Diego Soto, who unravels the tangle of secrets associated with the past of the famous prison. The series was closed after 12 episodes but critics praised the acting work of Jorge.

Success with the public is the comedy thriller Hawaii Five-0, in which cast Garcia joined from the 4th season and was warmly welcomed by fans. The actor's filmography includes popular series Once Upon a Time, Californication and How I Met Your Mother, where he played in small but bright episodes. Jorge Garcia is annually removed in new projects and is also engaged in the voicing of cartoons.

It is not much known about the personal life of Jorge; he has no wife and children. From 2004 to 2006, his girlfriend was Malia Hansen. During the filming of the series Lost the actor was close to the colleague on the set, Bethany Leigh Shady. There were rumors that they were dating in 2007.

Young people repeatedly appeared together on the red carpet at the ceremonies and posted photos of each other on the pages of social networks. The pair led a weekly podcast Geronimo Jack's Beard, where they discussed the script of the 6th season of the series. They have not been seen together in public since 2013.

The man lives in Hawaii, where he moved during the filming Lost. He fell in love with the island and bought a house there, filming in the series. The actor also owns real estate in New York. Jorge likes to swim in the ocean, sing and play the piano in his free time. Jorge Garcia has a net worth of $5 million.

The artist plans shooting in the film When we were pirates, where he will also act as a producer. The film will tell about the childhood of friends and how the first dreams help to cope with the difficulties of adulthood. Fans hope to see the movie in 2019.