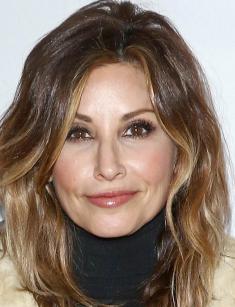 This Hollywood actress can boast dozens of roles, although only a few of them are leading. Still, her characters are as memorable as the main ones thanks to the woman’s splendid acting and unique appearance. Gina Gershon is known for the movies by Paul Verhoeven (Showgirls) and the Wachowskis (Bound).

Gina Gershon was born on June 10, 1962, in a suburban neighborhood of Los Angeles, Woodland Hills. The girl’s father, Stanley, worked in sales; the mother, Mickey, was an interior designer. Gina was the youngest among the three children, the brother Dann and the sister Tracy. The actress has Jewish roots: her grandparents from the paternal line came from Russia, and the grandparents from the maternal side lived in Poland.

Gina had to change schools often. She used to go to Collier Street Elementary School and Woodland Hills Academy.

The talented child received her first role in a school play at the age of seven. At that moment, she took an interest in acting and singing. When Gina turned 14, the family had to move to Beverly Hills so that the teenager could attend Beverly Hills High School and develop her artistic abilities in student performances.

In 1980, Gershon graduated and moved to Boston to enter Emerson College. The woman received her high education at New York University where she studied drama, psychology, and philosophy, and finished it in 1983.

Gina Gershon had her first acting experience at the theater: she collaborated with David Mamet and Harold Guskin who, as the artist emphasized later, profoundly influenced her formation as an actress. In the early 1980s, the woman started receiving her first roles as an extra. Thanks to her professional choreography training, she participated in corps de ballet.

In 1986, Gershon debuted in an episode of the romantic comedy Pretty in Pink by Howard Deutch.

Two years later, the actress earned her fame: she participated in the movie Cocktail starring Tom Cruise and played Coral, the friend of an ambitious careerist who had to work as a bartender and later became a gigolo. The movie was financially successful, but the overall reception proved to be ambiguous: the project was nominated for the Golden Globe and the Golden Raspberry Awards.

Anyway, the young actress’s work was notable; naturally, she was in demand later. In 1991, Gina took part in two significant movies: the drama City of Hope and the crime thriller Out for Justice with Steven Seagal.

With her bright appearance, Gina often received the offers to play prostitutes. For instance, she personified a hooker Patti Madano in Out for Justice. In 1993, Gershon was invited to the popular project Melrose Place and played a prostitute Ellen.

In 1995, when the famous director Paul Verhoeven offered Gina the role of a strip dancer in his new movie Showgirls, she was not surprised. However, the woman could hardly imagine that the movie would become a breakthrough in her career.

Shortly, Gina began to work on a new movie, the crime thriller Bound by the Wachowski, where she played a lesbian Corky who had just been released from prison and settled near the leader of the local mafia, Caesar.

Soon, his lover Violet and Corky feel a passion for each other. The women invent an evil scheme: to steal the money from the mafia clan and flee. The movie did not gross much but received several nominations.

Further on, Gina appeared in the top-grossing action movie Face/Off (1997) by John Woo. She was given the role of Sasha Hassler, the lover of the criminal Castor Troy who was followed throughout the whole movie.

By the late 1990s, Gershon proved to be a bright actress who broke stereotypes and did not hesitate to play scandalous characters. In the early 2000s, she returned to the theater work and personified Sally Bowles in the musical Cabaret (2001). In 2008-2010, after some break, she starred on the Broadway stage again. Besides, the artist co-founded the New York theater group Naked Angels.

In 2010, Gina participated in the comedy Love Ranch with Helen Mirren and Joe Pesci who played the spouses opening their own brothel. The next year was marked with the collaboration with Matthew McConaughey in the black comedy Killer Joe by the Academy-Award winner William Friedkin.

In 2013, Gina played Donatella Versace in the biopic House of Versace about the famous Italian family in the world of high fashion. The actress had her hair dyed blond and looked exactly like the designer.

Nowadays, the artist does not participate in movies as much as she used to; still, all her works are of top quality. The 2017 thriller Inconceivable by Jonathan Baker is one of the most notable recent projects. Gina co-starred with Nicolas Cage and Faye Dunaway.

Gina Gershon’s personal life has always been the object of paparazzi’s close attention. Although the actress has never been married, many outstanding men surround her.

In the early 1990s, the woman dated the actor John Cusack. In 2000-2002, Gershon had an affair with Owen Wilson; later, she was seen with Ralph Fiennes.

In 2008, Vanity Fair claimed in its article that the actress used to see the former American president Bill Clinton and published their picture together. Both sides argued against it and said they had met only in social events.

In 2015, Gina started dating the Belgian soccer player Robert Dekeyser. In January 2018, the celebrity announced they split up. She has no children.

In addition to her acting career, the Hollywood diva is engaged in music and sometimes performs songs she wrote. Besides, Gina creates children’s books. In 2008, the first edition of Camp Creepy Time was presented. It is a story about a boy who encounters aliens in a summer camp. The woman wrote the story together with her brother, Danny.

Today, the actress works on the series Riverdale that came out in 2018. Gershon has a recurring role of Gladys Jones.

Besides, Gina is involved in new projects; soon, she will appear in Red Shoes and the Seven Dwarfs.