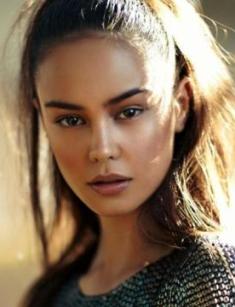 The Australian actress and photo model Courtney Eaton has earned her fame for the movies Gods of Egypt and Mad Max: Fury Road. The young woman started her career at 16 when a modeling agency offered her a contract. It was the road opener in the world of cinematography.

Courtney Eaton was born in Bunbury, Western Australia, in 1996. Her parents were simple people who had nothing to do with movies. The father was an Australian of the English origin; he worked in an international IT company. The mother came from New Zealand.

The head of a modeling agency Christine Fox noticed Eaton’s appearance and artistic abilities. At the age of eleven, the girl participated in several photo shoots for magazines.

It was difficult for Eaton to combine her studies and modeling career. Supported by her father, Courtney quitted school at 12. As the woman confessed in her interviews, she dreamed of becoming a doctor or a vet; she did not recommend to follow her example and leave school early.

The model was actively building her career; her photos received much attention and brought her the first contract at 16. Courtney’s mentor Myles Pollard helped her develop her acting abilities. Eaton participated in the Perth Fashion Festival and the Mercedes-Benz Fashion Week Australia.

The 19-year-old actress debuted in George Miller’s Mad Max: Fury Road in 2015. She collaborated with Tom Hardy, who personified the main character there.

The next year, Eaton played the slave girl Zaya who fell in love with the protagonist (Brenton Thwaites) in Gods of Egypt. The story based on Ancient Egyptian myths gave the artist more popularity and encouraged movie makers to invite her to other pictures.

In 2017, Courtney expanded her filmography with Drake Doremus’s love melodrama Newness, a touching story about relationships. Nicholas Hoult, the star of Mad Max and X-Men, played the main character.

The same year, the actresses had a secondary role in the youth comedy Status Update; the premiere took place at the beginning of 2018. Olivia Holt, Rob Riggle, Nicholas Lea, and Ross Lynch were her stage partners.

Further on, Eaton participated in Eddie Alcazar’s Perfect with Abbie Cornish, Martin Sensmeier, Leonardo Nam, and others. She also starred in short music videos, such as Angus & Julia Stone: Chateau.

At the beginning of 2012, Courtney Eaton started dating the famous Australian soccer player Callum Richardson. However, they split up three years later.

Soon, fans learned about the new boyfriend, Ross Lynch; the actors had collaborated in Status Update in 2018. Courtney posted many photos with the man on her Instagram page. Initially, the couple kept their relationship secret. However, when some videos and pictures of the kissing lovers appeared on the Internet, Courtney and Ross stopped hiding.

However, in 2017, Just Jared reported that the artists broke up; both celebrities collaborated with the magazine. None of them talked about the reasons, though. The young people remained friends.

Soon, Eaton began to date the actor Nicholas Galitzine who appeared in The Beat Beneath My Feet and High Strung.

By 23, the celebrity has reached much success; her net worth is $800 000 in 2019. Despite her young age, Courtney Eaton is a talented, recognized actress and one of the most beautiful Hollywood women.