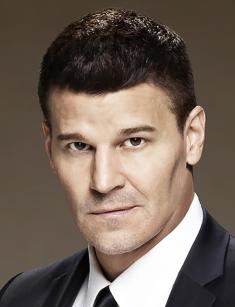 David Boreanaz is an American actor and director who earned his fame for the role of the vampire Angel in the TV projects Buffy the Vampire Slayer and Angel; the audience also remembers the FBI agent Seeley Booth in the detective Bones.

David was born on May 16, 1969, in Buffalo, New York, into the Catholic family. The father, Dave Roberts, worked as the weather forecaster on WPVI-TV; his ancestors moved to the USA from Italy. The mother, Patti Boreanaz, had Slovenian roots; she was a travel agent. The would-be actor had two sisters, Elizabeth, who became a History and Math teacher, and Bo.

David spent his childhood in Philadelphia, Pennsylvania. He went to Rosemont School of the Holy Child and Malvern Preparatory School; later, the young man continued his education at the private Ithaca College and studied directing and photography.

As soon as David graduated, he went to Los Angeles to practice his profession. Following several failures, the young man decided to take an episodic role of a biker in the sitcom Married... with Children. Soon, the actor appeared in two other projects, Aspen Extreme and Best of the Best II, and dropped out of cinematography for several years; he did odd jobs here and there.

David used to work as a parking attendant, house-painter, and errand boy; in 1996, he was a dog-sitter who walked other people’s pets. One day, a manager who was looking for the actors for Joss Whedon’s Buffy the Vampire Slayer noticed the young man. Boreanaz agreed to go to the auditions and proved to be an excellent actor.

The tall, dark-haired man received the role of the vampire Angel, the lover of the main character Buffy (Sarah Michelle Gellar). The mysterious drama also starred Alyson Hannigan, Nicholas Brendon, and Charisma Carpenter. The WB and UPN channels were broadcasting the series for seven seasons; TV Guide included it in the 50 Greatest TV Shows of All Time.

David became a popular TV actor and started participating in talk-shows. Producers analyzed ratings and decided to launch a new show where Boreanaz’s character would become the central figure. The series Angel was one of the top-grossing works and lasted for five seasons. It made David the frequenter of mysterious movies. The actor received three Saturn Awards thanks to the series; People included him in its Sexiest Man Alive list.

2001 brought the first full-length movie, the horror Valentine. The artist played Adam Carr who turned out to be a murderer and collaborated with Marley Shelton, Denise Richards, Jessica Capshaw, and Jessica Cauffiel. Filming took a month and a half; there were many changes at the editing and computer adaptation stages. Some violent scenes were cut off for political reasons.

2002 was marked with Jon Sherman’s I’m with Lucy. As the story runs, Lucy is choosing her fiancé among five candidates. The next year, David appeared in Dido’s music video “White Flag”; he also voiced Leon in the computer game Kingdom Hearts and Angel in the game version of the series Buffy the Vampire Slayer.

Further on, the artist worked on American Dad!, These Girls, and The Crow: Wicked Prayer. In 2005, David joined the cast of the new project that profoundly influenced his career: the series Bones. The premiere took place on Fox channel and brought the man international fame. The duo of David Boreanaz and Emily Deschanel was bringing joy to the audience for 12 years; the love story between Agent Seeley Booth and Doctor Temperance was the central intrigue.

Overall, the artist earned $250 000 in this project. In the last seasons, David also worked as a director and producer in addition to the lead part.

In 2006, the crime action comedy The Hard Easy by Ari Ryan was released. It is the story about two gangs that organize the robbery of the same bank. The movie also starred Henry Thomas, Vera Farmiga, and Bruce Dern.

The same year, David appeared in the comedy Mr. Fix It; he played the man who helped young people come back their partners who had left them. Lance Valenteen goes to a date with these women; everything works out so terrible that they change their attitude to their own husbands.

2013 was marked with Officer Down, the crime detective about investigating a chain of murders. Boreanaz also contributed to the series Sleepy Hollow and Full Circle.

In 1997, David Boreanaz married a social worker Ingrid Quinn; they spent two years together. After a two-year pause, the man proposed to his childhood friend, the actress and Playboy photo model Jaime Bergman.

The ceremony took place in 2001; the next year, David’s son Jaden Rayne was born. In 2009, Jaime gave birth to the daughter, Bella Vita Bardot.

In 2010, the actor publicly confessed about his cheating, apologized to his wife, and promised to change. The man took this step because the woman who had a short affair with David was blackmailing him.

Jaime did not know about her husband’s betrayal; it was a severe blow for her. The woman considered a divorce, but the couple managed to make amends.

In May 2017, after the series Bones was finished, the new project with the actor was premiered on CBS: SEAL Team. Boreanaz played the Master Chief Special Warfare Operator; Jim Caviezel could have played this character.

The actor has Twitter and Instagram accounts and often posts pictures from movie sets. He has two tattoos on his wrists meaning “Destiny” and “Soul” in Kanji.