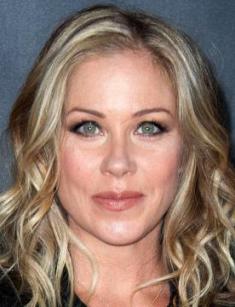 Christina Applegate is an American actress known for the movies Heroes and The Sweetest Thing. The series Married... with Children opened the artist the road to Hollywood and brought much popularity. Critics have also recognized her talent: Applegate has won several Golden Globes and Emmys.

The would-be Hollywood star was born on November 25, 1971, into the family of Bobby William Applegate and Nancy Lee Priddy. The kid’s parents were artistic people: the father worked at a recording company, and the mother was Leonard Cohen’s backup vocalist and participated in the series Bewitched.

Bobby and Nancy divorced soon, and the father married again. Two children were born in his new family: Alisa and Kyle; Christina keeps in touch with them.

The girl was taught how to work from early childhood; she appeared on the screen when she was only three months old. As parents tried to introduce their daughter to the world of cinematography, she had no normal childhood.

Applegate did not even finish school because of her acting career: the 17-year-old woman took her documents and began to conquer Hollywood. She started thinking about her future only at 20. The young actress did not have much pleasure from Hollywood parties; she would lock herself in a room and rest, listening to music or reading.

Christina started her career when she was five months old: she appeared in a diaper commercial’ the girl also participated in the series Days of Our Lives with her mother. The 13-year-old teenager personified the main character in her youth in the series Grace Kelly (1983).

The sitcom Married... with Children made 17-year-old Christina a star. The project turned out so popular that posters with Applegate’s character, Kelly Bundy, were bestselling in the United States and Canada. Overall, the actress spent ten years in the series.

1990 brought the movie Streets about teenage drug users. The comedy Don’t Tell Mom the Babysitter’s Dead followed the next year; it was the actress’s first blockbuster.

The famous art-house directors Gregg Araki and Tim Burton took an interest in Applegate; she participated in Vibrations, Across the Moon, Wild Bill, Nowhere, and Mars Attacks!

In 1997, as soon as the filming of Married... with Children finished, the artist’s career came to the next level. In 1998, the young woman joined the cast of the series Jesse and received the TV Guide Award for Favorite Star in a New Series. She was also nominated for the Golden Globe.

In 2001, fans could enjoy the next project with their favorite, Just Visiting; it was a time-travel story. The Sweetest Thing was another bright work; Christina personified the main character’s (Cameron Diaz) friend in two episodes. The sitcom was victorious and brought the Emmy Award.

Further on, Applegate took part in the movies Heroes, View from the Top, Grand Theft Parsons, Surviving Christmas, and Employee of the Month. 2004 was special for the actress: she was invited to the musical Sweet Charity on Broadway. Her talent was appreciated: critics gave the woman the Theatre World Award.

As for the recent works, the movies Vacation, Bad Moms, and Crash Pad stand out. Besides, Christina voiced one of the characters in the animated movie Alvin and the Chipmunks: The Road Chip.

The then little-known actor Brad Pitt entered Christina Applegate’s life when she was 18 years old. The young people belonged to the same circle and began to date. While it was an insignificant affair for the woman, Pitt had a different opinion. The actress realized at some moment that the relationship was sucking her in and broke up with her boyfriend.

In 2001, the artist married her first husband, Johnathon Schaech. The wedding ceremony took place in Palm Springs; many friends and relatives were present. However, the spouses split up four years later due to irreconcilable disagreement; the official divorce took place later, in 2007.

Christina met a new love in 2005; it was a skateboarder Lee Grivas. The couple spent two years together.

Further on, the actress met the musician Martyn LeNoble. She liked him immediately; the new romance began.

This is when Applegate learned the news about her disease: she was diagnosed with breast cancer. Doctors had to perform the complete mastectomy, which reduced the relapse risk by 100%. Soon, the patient fully recovered.

In 2010, Martyn proposed to his beloved one on Valentine’s Day. They married on February 23, 2013. Their daughter, Sadie Grace LeNoble, was born two years before the wedding, on January 27, 2011.

Christina Applegate actively collaborates with PETA; she stopped eating meat a long time ago. The actress is fond of jazz-modern dances and photography.

The woman continues to play in movies and series popular on IMDb and does a lot of charity work. She helps a children’s foundation and women with cancer as a leader of the Right Action for Women organization. Screening and disease prevention are significant parts of the fund’s activities.

In October 2017, Christina had to have another surgery. Nine years ago, Applegate’s cousin died of ovarian cancer; screening showed that the artist’s risks were also high. Thus, she had her ovaries and fallopian tubes removed.

Although the actress has no official Instagram, one can find her on Twitter: the woman shares her thoughts there and posts videos from charity events. The celebrity supports the Democrats.

The series Ask the Storybots and the Netflix show Dead To Me are the most recent projects.