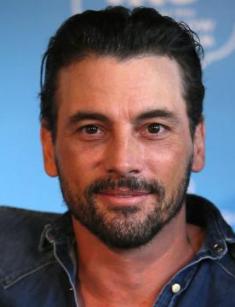 The American actor, known to a broad audience by such television series as Jericho, Riverdale, Law & Order, as well as the legendary movie Scream. The characters portrayed by Ulrich on the screen are most often negative. However, the charismatic appearance of the actor and the depth of his visual talent captivate viewers and hold them hostage to his thoughtfully created villains.

The actor's real name is Bryan Ray "Skeet" Ulrich. He was born on January 20, 1970, in the American city of Lynchburg, Virginia. The boy's childhood was spent in Concord, North Carolina. The actor's mother, Carolyn Elaine Wax (née Rudd), is a daughter of the President of the car company Al Rudd Auto Parts, Alvin R. Rudd, and the sister of the famous NASCAR driver Ricky Rudd.

Brian and his brother, Jeffrey, are Caroline's children from their first marriage, which wasn't a happy one. When Brian was eight, she remarried to former NASCAR driver and owner of the Winston Cup racing team, Donald Keith (D. K.) Ulrich. Brian fell in love with his stepfather; he liked to disappear in his garage all day. There the boy received his first earnings.

The actor still considers Ulrich, his father and bears his name, even though his mother divorced him and remarried. This time for the businessman from New York, Edward Lewis Wax.

The boy was a sickly child; he was born with a pathology of the heart interventricular septum. At the age of 10, Brian underwent a complicated open heart surgery, which is still evidenced by the scar on his chest.

Brian quickly recovered and soon already led a way of life of an ordinary teenager, went to school, and was engaged in football section. When he was in a junior league, the coach gave him the nickname Skeet due to his skinniness and small height (it was only later that he would grow up to be almost 6 feet tall). Artistic by nature, the older boy could often be found by the mirror, when he picked up a guitar and portrayed the favorite 70's singer John Denver.

As stated in the biography of the actor, after graduating from Northwest Cabarrus High School, Skeet entered the University of North Carolina at Wilmington, where the specialty of a marine biologist attracted him. The guy dived deep into his studies and earned his pocket money by acting in the crowd in various movies.

Ulrich acquired his first experience of acting in the films Weekend at Bernie's (1989) and Teenage Mutant Ninja Turtles (1990). The roles were so tiny that Skeet wasn't even listed in the credits. However, a fleeting acquaintance with the world of cinema captivated Ulrich so much that he gave up science and transferred to New York University to study acting.

In New York, the charismatic guy was noticed by the playwright and director David Mamet who invited him to his Atlantic theater school. Participating in the productions of the troupe of Mamet, Skeet drew the attention of director Stacy Cochran. She sent a cute guy to audition for CBS Schoolbreak Special television show. So Ulrich played in the 4th episode of the 11th season and thus opened the door to the world of great cinema.

1996 was a real breakthrough in the career of Skeet Ulrich. He starred in the first notable role in the film Boys, where his partner was Winona Ryder herself. Then came the role of Chris Hooker in the movie The Craft starring Neve Campbell in the leading role.

And finally, the third gift of the year – the role of cold-blooded maniac killer Billy Loomis in the chilling slasher Scream directed by Wes Craven. This role is still considered one of the most famous in his filmography. Besides, it is impossible to imagine someone else portraying Billy, as Skeet did such a great job. However, as strange as it might seem now, Skeet waited for the approval for this role for a long time. The producer were all saying that he looked like Johnny Depp in A Nightmare on Elm Street movie. However, the director was able to convince everyone, and Scream was doomed to succeed.

As if "atoning for sins" for the blood spilled in the Scream movie, immediately after that Skeet starred in the film Touch (1997), playing Juvenal / Charlie Lawson, suffering from stigmata and healing people with the touch of his hand. In 1998, Ulrich became the star of Richard Linklater's film, The Newton Boys. In 1999, the viewers saw two more films with Ulrich – Chill Factor and Ride with the Devil.

Ulrich became famous after starring in television series. The actor got his first significant role in a television show in the TV project Miracles (2003), playing Paul Callan, a priest exposing scammers. The television show was a success, but it did not last for a long time. However, in 2006, Skeet had real stellar success. He played the part of Jake Green in Jericho, which made him a super popular favorite in America.

One cannot skip the role of Hollis Eckhart, nicknamed Compass-Killer, in the detective television series CSI: NY. The perpetrator left a compass at the scene of the murder, thus telling where the new one would happen. Ulrich managed to delve deeply into the world of the mentally ill person and reliably present his image to the public.

A new wave of popularity came to Skeet in 2017, after the release of the TV series Riverdale. In this dark teenage drama, the actor played the head of the local gang FP Jones, who used to have a romantic relationship with Alice Cooper – the head of the local newspaper. The star of the legendary Twin Peaks, Mädchen Amick, brilliantly portrayed Cooper.

Ulrich is a closed person and tries not to let people into his personal life. He does not like to be photographed and give interviews. However, thanks to the paparazzi, much is known about him. In 1997, Skeet married the English actress Georgina Cates, whom he met at a reception on the Academy Awards ceremony. For him, it was the first marriage, for her – the second.

The wedding took place at the Skeet estate in Madison County, Virginia. Of the guests, only the priest who married the couple was present. In 2001, Skeet and Georgina had twins - son Jakob Dylan and daughter Naiia Rose. The couple could not keep the family and divorced in 2005, agreeing on joint custody of children.

In 2012, Skeet Ulrich married actress Amelia Jackson-Gray, with whom he lived in marriage for only three years.

In February 2013, the first wife of the actor filed a lawsuit in which she claimed that he owed $ 284 861.84 US for not paying child care benefits. Ulrich denied all charges and pleaded not guilty.

In 2016, the actor began dating model Rose Costa. Rose's son, Luke, called Skeet dad, and Naiia and Jacob called him their brother. In November 2017, the couple broke up.

Skeet Ulrich has a net worth of $5 million. Recently, the actor has starred in the third season of the series Riverdale, which premiered in October 2018.

Some changes also appeared in the celebrity's heart. In August 2018, the media reported that Ulrich had a romantic relationship with the 24-year-old Instagram model, Corin Jamie-Lee.