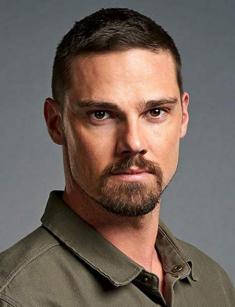 The famous actor Jay Ryan began with his theatrical career, his way in this direction began with a tour with the show The Packer, where the young man happened to perform on the same stage with the comedian John Collins. He appeared later on TV, however, and he managed to win his audience there, they were fans of the series Xena: Warrior Princess and Young Hercules.

The actor had the name Jay Bunyan at birth, was born in late August 1981 in Auckland, New Zealand. As a child, he was active and loved to attract attention. When he was ten years old, together with his family, the boy moved to Australia and graduated from high school there.

Parents noticed the artistry of their son in time, so they helped him determine the choice of an educational institution for actor's education. Although the boy began to dream about filming in the movie at the age of 9 for the first time, his dream came true only at the age of 19. There are the first movies in his biography during this period.

The first significant work in Ryan's filmography was the series Neighbors with Stefan Dennis, Alan Fletcher and Tom Oliver in the main roles. It is an Australian film about the life and problems of ordinary people.

The actor even had to abandon the proposed role in a Canadian film to star in it. But he had already starred before. It was the series Xena: Warrior Princess in 1999 (it was not even mentioned the name of the artist in the credits) and Young Hercules in 1998.

The next time the guy appeared on the screens was in 2002. It was the movie Superfire, where the actor got the role of a young man Dennis and he appeared before the audience a year later on the image of Charles in the film You Wish!.

When the artist moved to America and started to attend auditions in different movies, he decided to change the name to Ryan and since then the name Jay appeared in a new form in the credits. There were short films in his career, including Warra Warra, Mockingbird, Kaminey and Franswa Sharl.

And in 2007, he began working in the famous Australian TV series Sea Patrol in the role of Billy Spider Webb. The next film in his filmography the serial film Go Girls with the actors Irene Wood, Ingrid Park in the main roles.

Although there were a lot of invitations to the series at that time, he did not forget about working in full-length movies. In 2010, he starred in the dramatic film Lou directed by Belinda Chayko. The film tells the story of a family, a woman with three adult daughters. She works hard but the money she earns is not enough, she accumulates gradually more debts.

And she has a bad relationship with her daughter. She could not forgive her leaving from the father` s family. There is soon an old man Doyle in their house. The woman has friendly relations with him. She reminds him of his ex-wife.

In the same year, the artist appeared in one episode of the series in the fantasy genre Legend of the Seeker, which is based on the works of Terry Goodkind. And he managed to star in two TV series in 2011. The guy got the role of Fraser King in the film Offspring. He was shown in 6 episodes. And he turned into the character Curran in the film Terra Nova, in which the audience saw the actor in 3 series.

Jay got a significant role in the series Beauty & the Beast. The man was offered the main role of Vincent Keller. The artist appeared on screens together with Kristin Kreuk, Austin Basis, Nina Lisandrello and other celebrities for four years.

The plot revolves around a smart, tough and confident homicide detective, who works together with Keller. He's a former soldier, who was the victim of medical experiments. He acquired huge physical force; such ability helps to investigate and prevent the cruelest crimes in work.

After that, Ryan was invited to the main role in the series Top of the Lake, and the man played the detective Ben Wesley in 12 episodes of the serial film Mary Kills People from 2017 to 2018.

The personal life of the actor is successful. Although Jay tried to keep his relationship with the opposite sex secret, the press was aware of some of the details. The man has long been out of the ranks of the loners, his civil wife was the writer Dianna Fuemana, with whom the artist had been in a relationship for several years.

Dianna got pregnant soon after the beginning of their joint life but the young people and concealed this fact from the press. Although the man admitted earlier that he was not yet ready to become a father, the birth of his daughter Eve changed his worldview radically.

Jay announced the happy news to reporters immediately after birth. And his family came from New Zealand to Los-Angeles, where the actor lives the last years, to celebrate this event. Despite the presence of joint children, the couple never legalized their relationship and to this day is in the status of roommates.

In addition to filming in the movies, Ryan has one unusual hobby. A man buys old precious stones at auction and restores them in his spare time. Jay uses them to decorate frames and jewelry after giving them a new look.

Ryan continues to star in films. The American horror movie It: Chapter Two directed by Andres Mosketti will be released in September 2019, where Jay played the character Ben Hanscom. The plot is based on the continuation of the first part of the movie, 27 years have passed since then, all participants of the event have long forgotten the meeting with the demonic Pennywise and everyone continues to live their lives. However, a sudden phone call reminds them of the past and makes them come together again.

The man does not lead the page on "Instagram" and "Twitter" probably because of the constant employment at work. But fans often post new photos of Ryan and favorite shots from the films, where he was shot on these social networks. Girls-fans note the sports figure of the artist and it is not surprising because he is 6 feet (185 cm) and weighs 174 lbs (79 kg). Jay Ryan net worth is $700,000.