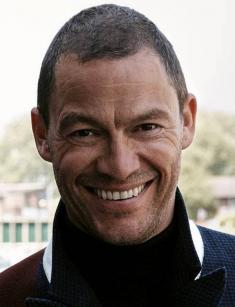 Watching the creative biography and the fate of the actor is a special pleasure. Someone who become opponents because of the failing samples in the same movie, put up on the set of another (for example, Georgiy Yumatov and Vasiliy Lanovoy). Someone (Nonna Mordyukova) cannot forgive the offense for the role of the beautiful Cossack, her colleague and sees her as the enemy number one (Elina Bystritskaya) all her life. And someone gets a prestigious television award for playing a serial killer namesake like Dominic West.

In the middle of October 1969 in Sheffield in a large Catholic family of the actress, Pauline Mary and her husband, a successful owner of the factory for the production of plastic Thomas George was born the sixth child Dominic Gerard Francis Eagleton. One baby was born after him; happy parents had seven children: five girls and two boys. However, this fact did not prevent the parents from getting a divorce in 1996.

The grandparents on the mother's origin are Irish, on the father `s origin are British and also Irish. A curious fact: Dominic is the cousin of the former American Senator Thomas Eagleton. West's childhood was spent in a separate stone house, located near the swamp. When the boy was nine years old, he asked his mother to take him to a local amateur theater studio.

At first, everything went not very smoothly at Eton College, but later the teenager got a role in Shakespeare's "Hamlet." Then the guy suddenly decided to feel "different" and went to Argentina, where he stayed a cattle breeder for less than six months. It paid off.

On his return, he was in Dublin Trinity College (where Oscar Wilde and Jonathan Swift once studied), played the first role in the short film 3 Joes and graduated with a bachelor's degree in literature. The debut in the movie inspired the guy and he decided to enter the Guildhall School of Music and Drama.

As for the memories of his early years, Dominic said he sincerely regrets that he did not take time to join the boy scouts. His only brother learned from monks in Yorkshire and later introduced Dominic to the fine art of calligraphy in his youth.

West debuted on the big screen in the full-length Richard III by William Shakespeare's play in 1995. He turned into the brilliant Pablo Picasso next year and then appeared in films based on the works of the great classics The Gambler of Dostoevsky and A Midsummer Night's Dream by Shakespeare.

Further, Star Wars and Rock Star where he played the guitarist Steel Dragon and the Oscar-winning Chicago that won the first award, Mona Lisa Smile with Julia Roberts were added to the filmography of the actor.

Next historical movies gave the main role and strengthened the love of the public: 300 (Theron) and Centurion (Titus Flavius Virilus). The performer did not have to complain about his characters. He was lucky to turn into Ernest Hemingway, Oliver Cromwell, Henry Gauthier-Villars.

Dominic is not against to pamper young viewers, voicing cartoons willingly. He voices Rudder in the movie Finding Dory and he voices the Elf in the movie Arthur Christmas. However, the series The Wire and The Affair with Ruth Wilson (in which she is removed now) brought him great popularity. The artist admitted once in an interview:

"I went to America to get away from the constant participation in costumed dramas, playing the dressed up characters. It's interesting that I was invited as an ordinary hard-working policeman in the movie The Wire because I doubt that it would happen in my native England".

Despite the active cinematic activity, the actor does not forget about the theater, performing on the stage of the Royal National Theatre, Donmar Warehouse, Crucible Theatre and others.

When Dominic was 28 years old, he had his first daughter Martha from his beloved Polly Astor, an aristocrat and the daughter of a politician. However, it was not the reason for the official registration of marriage. By his admission, he knew that he was not kind to his girlfriend but was not ready to throw a successful career in cinema. When the child was three years old, the couple broke up completely.

Dominic met at the university with the only official wife, the producer Catherine FitzGerald but she left him and married another.

"She probably thought I was a bit of an idiot", West jokes about this "dramatic" story of his youth.

In his personal life of FitzGerald, everything went wrong soon and the man started taking active actions on her return after her divorce. Persistent are successful: Catherine married Dominic at the end of June 2010. The happy couple has four children: Dora, Senan, Francis and Christabel.

West once shared with journalists that it was difficult for him to adhere to Catholicism because of their numerous strict rules concerning sex. But now, when he is a father of many children, he would like them to adhere to the canons of religion in this matter, as well as family traditions and values. So it is necessary to go to church on the weekends.

He spends his free time and money on completely useless things with eBay. Princess Anne and Klaus Kinski, the style icon Sylvester Stallone respect him, contrary to fashion and the worst villains-those who destroy monuments. He also does charity work.

2018 was fruitful for the artist. The world premiere of the drama Colette, where Keira Knightley and Dominic West played main roles was on January 20. Later, the movie Lara Croft Tomb Raider was released on the screen where Dominic played the dad of Tomb Raider.

The first episode of the mini-series Les Miserables was presented on the court of spectators on December 30 of the same year, where West appeared in the role of Jean Valjean. Next series were released in 2019.

The fit Englishman (he is 72 feet tall, he weighs 194 lbs) is far from social networks but nothing will stop loyal fans who are actively creating fan pages and share photos and news from the life of the idol. Dominic West net worth is $12 million.