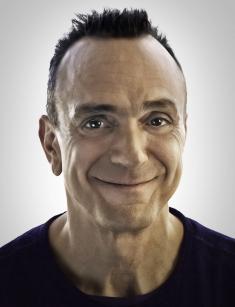 The audience unmistakably recognizes comedian Hank Azaria by his voice, belonging to many characters of the cult animated series the Simpsons. The voicing, based on parodies, received four Emmy awards and made the actor famous, paving the path into the big screen movies world. Among the most noted works of Azaria are feature films The Birdcage, Great Expectations, and Godzilla, and on television, he is remembered from his work on the legendary television series Friends, and the title role in the American comedy series Brockmire.

Henry Albert Azaria, who later got a short nickname Hank, was born in the densely populated district of New York on April 25, 1964. The Jewish family, in which the father ran several dress-manufacturing businesses, while his mother raised three children, was from Thessaloniki, Greece, and all the members of the family could speak Spanish and English fluently.

Hank spent his childhood watching movies and comedy shows, memorizing and performing the scenes and parts of the show he liked. In elementary school, the boy played in apprentice productions and by the age of sixteen fully decided that he wanted to become an actor. His parents supported their son and blessed him to study drama at Tufts University.

In his university years, Azaria together with his classmates took part in classic productions and worked part-time in advertisement projects. Besides, Hank was a member of a youth company named Big Theater, which throughout its existence gave the only performance of Harold Pinter's play The Dumb Waiter. After receiving the drama actor's degree, Azaria, on the advice of agent Harry Gold moved to Los Angeles and started his career on television.

Hank's debut role on TV was a 3-minute appearance on one of the episodes of the television series Joe Bash, starring Peter Boyle. Even though the final version didn't have the scene with the unlucky policeman, this work gave Azaria a ticket into The Screen Actors Guild and made it possible for him to take part in more auditions.

Soon the young man appeared in the pilot episode of Morning Maggie starring Matthew Perry, became friends with the actor and got on the set of the cult Friends television series. Playing the role of a young scientist, the ex-fiancé of one of the leading characters, Phoebe Buffay, Hank received an Emmy award in the category Outstanding Guest Actor in a Comedy Series.

After that, Azaria got on the audition for the animated sitcom The Simpsons, and the creators Matt Groening and Sam Simon liked him very much. They entrusted the actor with the voice-over for a character named Moe Szyslak in the episode "Some Enchanted Evening," and then offered him a weekly work on the project.

The Simpsons turned the actor's biography around. By the second season of the show, several characters spoke in the voice of Hank, who signed a contract with Fox Studio and in 1989 became a permanent member of the cast.

Having a talent for impersonation, Azaria made the characters speak as such Hollywood stars as Al Pacino, Edward G. Robinson, Sylvester Stallone, and Peter Sellers. Besides, the actor used lexical constructions, intonation, and accents which he had heard on the street.

His work on The Simpsons brought Azaria four Emmy Awards for Outstanding Voice-Over Performance in 1998, 2001, 2003 and 2015 and two nominations which he lost to his colleague on the set Dan Castellaneta and the guest star Anne Hathaway. Besides, Hank, who at first was gaining $30 000 for an episode, improved his financial situation, getting a salary of $300 000.

The actor who gained fame was now in demand. In 1990, he made his debut on the big screen with his role in the movie Cool Blue and then played a cameo role of a policeman in the famous romantic comedy film Pretty Woman starring Julia Roberts and Richard Gere.

In The Birdcage, Azaria loosened up and instantly got into one of the central characters, Guatemalan gay janitor, Agador Spartacus. The actor had a lot of fun coming up with quirky accents and changing the timbre of his voice. In 1991-1994 Azaria starred in the television series Herman's Head, and then got a regular job in the sitcom Mad About You, for which he was nominated for an Emmy in 1998.

In the late 1990s, the motion pictures Grosse Pointe Blank, Great Expectations, and Godzilla were added to the actor's filmography, after which Hank took a break from acting in films, and returned to voice-over roles in cartoons and animated series. Azaria confessed that he was not thrilled with the voice over of the characters of Spider-Man: The Animated Series, Anastasia, and Family Guy, but he worked with pleasure on Futurama and short-film versions of The Simpsons.

Devoting several hours a week to animation, Hank was available for new offers, and in 1999 he brilliantly performed dramatic roles in the films Cradle Will Rock, Tuesdays with Morrie and Uprising, winning an Emmy award as Best Actor in a Picture Made for Television.

In 2004, Azaria became executive producer and the main character of the long-running show Dr. Huff and earned the recognition of critics, who called Hank's acting "impressively fine." Despite having six Emmy nominations, the project was low-rated and was shut down in 2006.

Hank's next projects were David Schwimmer's directorial debut entitled Run Fatboy Run and several parts in the comedy film Night at the Museum: Battle of the Smithsonian. Besides, in 2011, the actor starred in a computer-animated comedy film The Smurfs, playing the "bad guy," Gargamel. During the filming and photo-shoots, Azaria wore false ears, teeth, and eyebrows, and shaved his head to wear a special wig.

In 2016, Hank wrote the script for the television series Brockmire, produced it and even played the leading role, a sports-commentator, trying to get his love life back in order.

In his youth, Azaria did not enjoy great attention from women. His first serious relationship started only in 1990 when the actor met Julie Warner, known for her work on the television series Scrubs.

In 1994, Hank's colleague from the set, Helen Hunt, became his long-term girlfriend, to whom he proposed after five years of courtship. The traditional Jewish wedding took place on July 17, 1999, in Southern California but the family life did not work out, and Azaria left his wife, citing irreconcilable differences.

Seven years after the divorce, Hank began dating a former actress, Katie Wright. Soon after they had met, the couple made their relationship official, and in 2009 they had a child whom they named Hal.

In 2013, the family moved from Los Angeles to New York and now lives in a house, previously owned by The Simpsons star, Daniel Castellaneta.

Hank Azaria has a net worth of $70 million. In 2018, Azaria finished his voice-over work on The Simpsons episodes that aired on January 6, 2019. At the same time, he is currently working on the new season of Brockmire and is planning to become a director and a producer of the movie Outsourced.

The rumor has it that the actor received an offer to work on the television project A Visit From the Goon Squad, created by Shandor Garrison, although the date of the premiere is yet unknown.