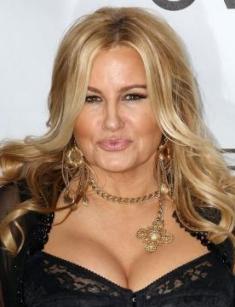 Jennifer Coolidge is called a comedian actress, although she has played dramatic roles no less brilliantly. Jennifer rose to prominence after the release of the comedy American Pie. Although she played a bit part in the American Pie film series, fans always looked forward to the appearance of Stifler's Mom.

Jennifer Coolidge was born on August 28, 1961, in Boston. She graduated from a school in Norwell, and then entered college.

After graduation, Jennifer moved to New York City, where she performed in the comic show Gotham City. After a while, she joined the comedy troupe Groundlings and moved to Los Angeles.

The audience liked the sparkling performances of the actress and her comedic images, and soon directors paid attention to her. At the start of her career, she was offered the roles of silly blondes. Coolidge had to accept them because it was necessary to gain experience.

Jennifer began an acting career in 1993 with an episode in the TV series Seinfeld. The girl portrayed a title character in the next project, the TV series Saturday Night Special. But it aired only for two months, after which the producers closed the project. In 1995, two movies were released, featuring Jennifer Coolidge, but she got bit parts.

The actress considers her acting debut to be the film Trial and Error, which viewers saw in 1997. For the next two years, Coolidge did not appear in significant projects.

Jennifer became famous overnight after the premiere of the comedy American Pie. The actress brilliantly played Stifler's Mom, who tried to seduce her son’s classmate in every possible way.

Although Coolidge played in one scene of the film, that moment became the most memorable one. As a result, the word "MILFS" even appeared in American culture.

Directors began to offer the actress prominent and leading roles more often. She starred in American Pie 2, The Broken Hearts Club: A Romantic Comedy, and Legally Blonde. In the last film, viewers saw Jennifer as Paulette, a naive good loser. Critics and viewers mentioned Coolidge's amazing ability to convey the feelings and emotions of unattractive heroes on the screen.

Then, in the 2000s, Jennifer landed a small role in the popular TV series Friends.

In 2001, Jennifer starred in the movie Zoolander, and two years later appeared in the sequel Legally Blonde 2: Red, White & Blonde. They were followed by the projects American Wedding, Sex and the City.

From 2004 to 2006, Coolidge starred in the sitcom Joey, the continuation of the series Friends about a new chapter of Joey Tribbiani's acting career. Jennifer played Joey’s movie agent Roberta "Bobbie" Morganstern. From the very beginning, the ratings of the series were not high, but it did not prevent Matt LeBlanc from receiving a Golden Globe nomination in 2004. Two years later, the project could not beat off competition and was closed.

In 2004, Coolidge starred in the romantic comedy A Cinderella Story, in which she played the role of the evil stepmother of Hilary Duff’s heroine. The project became a box-office success story.

In 2008, Jennifer began shooting in the TV series The Secret Life of the American Teenager. The actress was involved in this successful sitcom for four years.

From 2012 to 2017, the actress starred in the TV series 2 Broke Girls. She played the eccentric neighbor of the title characters and overshadowed the young actresses in some scenes. The creators wrote the character of Sophie Kachinsky specifically for Jennifer. In the first season, she played only a recurring role and was promoted to the main cast from the second.

In 2012, fans of the American Pie franchise saw the new film American Reunion, in which Coolidge returned to the role of sexy Stifler’s Mom.

The directors appreciate Jennifer Coolidge's non-standard appearance. She is tall, has magnificent breasts, which makes her a real femme fatale, but only in comedy movies. There were only three dramatic roles in her acting career. These are the films Date Movie, Epic Movie, The Bad Lieutenant: Port of Call New Orleans. Viewers and critics polarized on their view of these parody projects, although they were commercially successful.

In 2013, the celebrity portrayed a new image in the film Austenland. She played the English aristocrat, Miss Elizabeth Charming.

Jennifer Coolidge even worked as a voice actress. She voiced the characters in the animated movies Hell and Back and Alvin and the Chipmunks: The Road Chip.

The star admitted in an interview that after filming in American Pie, young men wanted to get acquainted with her. Jennifer was also fascinated by the idea of a relationship with a young person. As a result, she dated a significantly younger man for several years.

Then the actress began dating actor Chris Kattan, but later they broke up.

The media has written that the actress is married to Tom Mahoney. Now the couple brings up two children who were born in 2012 and 2013.

In 2005, Jennifer purchased two houses in New Orleans. Both mansions were damaged during Hurricane Katrina.

Although the actress has an official Instagram page, she only shares funny videos and backstage photos, posting personal pictures less often. The artist’s microblog does not provide insight into her hobbies besides filming. Jennifer also shares messages with readers on Twitter.

It is known that the actress is an animal rights activist, and she adores them. Coolidge uses social media to appeal for fauna protection.

In January 2018, Jennifer retweeted a video of the Avengers star Mark Ruffalo, in which he asked to put an end to sexual harassment in the workplace after the scandal had erupted in Hollywood. Thus, the actress supported her colleagues and expressed solidarity with the victims.

Although Coolidge’s personal life is hidden from prying eyes, the acting career of the star is in the spotlight. However, nowadays, she rarely appears in movies.

In 2017, Jennifer voiced the characters in two projects again. These were The New Adventures of Max and B.O.O.: Bureau of Otherworldly Operations.

However, The Emoji Movie, in which Stifler’s Mom worked as a voice actress, became the worst film of 2017, receiving four Golden Raspberry Awards.