Derrick Lewis nicknamed The Black Beast is an American mixed martial artist. By now, his longest victory series equals six fights. The successful performance against the Russian athlete Alexander Volkov became the breakthrough moment in his career: Lewis had the chance to become a heavyweight champion. However, he failed in it.

Derrick James Lewis was born on February 7, 1985, in New Orleans, Louisiana. The boy was the second among seven children; he grew up fatherless. Lewis’s behavior was far from being perfect: the troublesome teenager often participated in street fights.

In 1999, the family left New Orleans for Houston: the mother wanted to escape from her live-in lover who abused the kids and herself. At that time, Derrick decided to follow a peaceful course and took up boxing. The young man practiced a lot but did not get rid of his habit to solve problems with his fists.

Two weeks after a prom, when Lewis was 19, he attracted the police’s attention. Derrick was accused of the aggravated attack: he beat the ex-husband of the woman he dated at that time. Due to the young man’s age and the absence of previous legal issues, he was on a probation period. However, it did not teach Lewis a lesson.

The man entered a college and even got a scholarship as a promising athlete. However, he studied only for two years and then got imprisoned for violating the probation conditions. Derrick was sentenced for five years, but he had an early release in three and a half years.

After prison, Lewis could not go back to the college. Soon, he got hired as a tow-truck driver and returned to boxing. Despite Derrick’s hot temper, his coach, George Foreman, did not lose his faith and planned to make the athlete an international sports star.

In the course of time, the man gave up boxing: he preferred mixed martial arts. Lewis’s friend told him about MMA and a gym Silverback. It was an excellent opportunity for Lewis to show his character and quench his thirst for street fights. Besides, it was a quick way to earn his family’s living.

In 2009, the sportsman debuted in MMA and failed: he lost to Jay Ross; a doctor stopped the fight. The second time turned out to be better: Lewis rehabilitated in the meeting against Tim Buchanan and was invited to become a professional.

May 2010 brought the contract with Bellator Fighting Championships. However, the collaboration with this company did not last long: the fighter left after the only fight against Tony Johnson when he lost; the jury’s decision was unanimous. Later on, Lewis had a series of six victories; he won the Legacy FC Heavyweight Champion and joined the UFC.

The athlete was supposed to debut in the new status at Fight Night: Condit vs. Kampmann. However, Derrick could not meet Nandor Guelmino because of a trauma. The event was postponed for almost a year. When the fight did take place, Lewis won with a knockout in the first round.

The next fight with Matt Mitrione brought Lewis a knockout. Further on, a series of successful performances followed: the sportsman defeated Damian Grabowski, Gabriel Gonzaga, Roy Nelson, and Shamil Abdurakhimov.

Lewis turned into an MMA star at UFC 229: he crashed Alexander Volkov. The number of Lewis’s followers on Instagram increased from 600 000 to 1.2 million. It was a spectacular fight: the Russian sportsman remained a leader until the last moment. 40 seconds before the end, exhausted Derrick attacked and knocked out his rival. Thanks to this achievement, Lewis got the opportunity to fight for the heavyweight champion title against Daniel Cormier.

The sportsman dated his girlfriend April for a long time; they had two sons and a daughter before they married officially. According to Lewis, his wellbeing in personal and sexual life is the key to success.

The couple married in 2017. The luxurious ceremony was held in Hawaii; the media did not obtain any photos.

The same year, rumors had it that Lewis took an interest in his MMA colleague, the former featherweight champion despite his new status of a husband. However, the athlete did not seem to have done something worth disapproving: he only sent Rousey flowers when she was included in the UFC Hall of Fame. It was probably a part of the PR campaign to raise people’s interest in the fight between Lewis and Ronda’s husband Travis Browne. Thus, Lewis’s numerous implications could be aimed at irritating the opponent.

“They [UFC] threw money at me like I was a stripper, and I was fine with it”.

October 2018 was marked with the long-awaited fight between Lewis and Cormier. The majority of the audience supported the current champion, and Derrick could not turn the tide. D.C. used a choke and won in the second round.

Nowadays, the athlete continues to develop his skills; he hopes for a rematch and the long-awaited prize, the UFC champion belt. 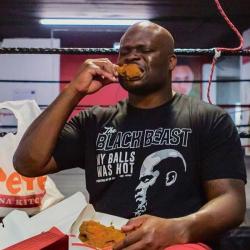