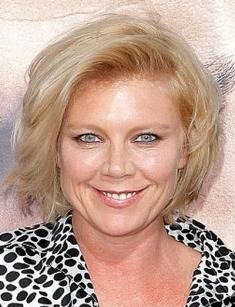 The Nordic blonde with deep sky-blue eyes was familiar to everyone who had a TV in the early 2000s at home. People called her Nikita and she was loved for a daring temper, an unearthly beauty and a golden heart. The image of a strong woman with a vulnerable soul formed the basis of the cult series, the heroes of which fought either terrorism or each other. The heroine became a world favorite and this success can hardly be repeated within a television career.

Peta Gia Wilson was born on the green continent in 1970. Peta's family lived in Sydney, New South Wales. The actress's parents were soldiers: her mother was engaged in the supply of products, and her father was a career officer. He waited very much for the first-born boy and even wanted to call him Pedro. But the girl was born and the dad had to experiment with the name.

In childhood, Peta with the family often and unexpectedly moved to remote places and the parents' profession caused that. When the girl was five years old, the family had already the son Rob by that time and moved to Papua New Guinea. The girl began to get sick in the new environment and barely recovered from malaria, which lasted for nine months.

After recovery from with the filing of the grandmother, Pet began to take her health seriously: she followed a strict regime of the day with early rises, was engaged in the hardening and embraced sports. She chose basketball, and she fell in love with judo, when she went to school. The girl grew up as an active and independent girl; she got close to new people quickly and found friends. She had to learn it because she changed a dozen schools over the years of study.

The girl was the father's favorite and her mother worried that her brisk and sharp daughter was devoid of femininity and grace. Peta often ran away from the dance school, where her mother sent her and she willingly changed dresses and skirts into jeans.

The girl had to survive the first personal drama in 1985: her parents ' divorce. At first, Peta decided to stay with her mother but she moved to her grandparents later. The future actress continued to play sports and she even was in the Australian national team for Netball in her youth. At the same time, the girl was noticed in the industry of show business and she got offers from the modeling agencies and made her first contracts.

1991 was a turning point in the biography of the actress: Peta leaves Australia and moves to Los Angeles with the goal to build a modeling career. She changes plans after a couple of months and decides to engage in acting seriously. The girl goes to courses and hires an agent. She is offered small roles in television projects. The Canadian-French TV series Highlander was successful at that time, where Wilson played a romantic heroine.

When she starred in six passing films, the actress decides to improve her skills and goes to New York in 1996, where she was waited on Broadway. But on the way, she agrees to stop by for an audition for the Canadian television series La Femme Nikita in 1996. She confidently bypassed two hundred competitors, Peta pulled a lucky ticket. This role will bring her fame all over the world.

The girl's partner on the set was the charismatic Canadian Roy Dupuis. Their on-screen "chemistry" fascinated the viewer and held the audience at the screens for five seasons.

Wilson carefully prepared for the role to convincingly play a female assassin on the limit of human capabilities. She was able to perform most of the tricks herself thanks to the martial arts classes and they are abundant in each episode of the series. But it is especially touchingly how the heroine protects her right to love and feel in conditions of total control and the strictest regulation of actions.

The series captured all North American channels and quickly moved to Europe. La Femme Nikita was broadcast with high ratings for several years in Russia. The actress arrives in Moscow to open the 23rd Moscow International Film Festival on the wave of success, where she meets with Vladimir Putin.

The following projects of Pet were not so bright, although she could afford to choose interesting roles. So, in between seasons of La Femme Nikita, she starred in the thriller Mercy, where she was the main star, but the film received a low rating. Since then, the movies with the actress come out about once a year, with occasional pauses.

In the drama False Pretenses (2004) Wilson plays a desperate waitress who lost a loved one and subsistence. Therefore, she is aimed to revenge violently. The last movie featuring Peta Wilson was released in 2015. She had not the role of the first plan in the film Dutch Kills.

No film with the participation of the actress was announced in 2019.

Peta Wilson was not officially married. Since 1997, she lived with her civil husband Damien Harrison in Los Angeles. Beloved waited for the children and the son Marlowe was born in 2002. Soon after the birth of the boy, the couple broke up.

In 2007, the Australian media shared information that Peta Wilson officially meets with Aaron Jeffery, an actor from New Zealand. However, the pair announced about the breakup in 2008.

Peta spends most of her time now at home, although she is often in the United States. She collects rare cars and even knows how to repair. She likes to explore the underwater depths, ride horses, grow flowers and draw.

The actress is in the business of selling sunglasses. Her heroine Nikita had an impressive collection of these accessories, apparently, so the company Serengeti invited Peta to become their official face.

The fans of Wilson share her photo on" Instagram "and" Twitter " in a swimsuit on the background of stunning views of Australia and even individual training programs, but Peta's personal life is not advertised.

She calls herself an actress, a philanthropist and an inventor. The woman eats healthy and she has a healthy lifestyle (the actress is 70 feet (178 cm) tall and she weighs 154 lbs(70 kg)). Peta Wilson has a dog. Her favorite Labrador Spaini survived a difficult operation in December 2018 and the actress asked her fans for moral support.