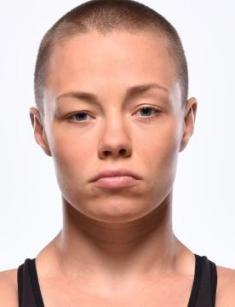 Rose Namajunas may seem a fragile girl, but, in fact, she is a thriving mixed martial artist, the former UFC champion, and number one in the Women’s Strawweight rankings. There is no wonder she received the nickname “Thug Rose”.

Rose Gertrude Namajunas was born in Milwaukee, Wisconsin, on June 29, 1992, into the Lithuanian family. The girl’s childhood was difficult: the father had schizophrenia, and the child was sexually abused.

Namajunas took up martial arts before she went to school. She joined a Taekwondo club at five and earned the junior black belt at nine. Later, Namajunas mastered karate and jiu-jitsu.

The 16-year-old young woman began to practice mixed martial arts and kickboxing as a high-school student. Jeffrey “Duke” Roufus became her coach. Namajunas debuted in the amateurish MMA in 2010, when she collaborated with Greg Nelson at Minnesota Martial Arts Academy. The newbie had four victories (two technical knockouts) and no failures; she finished all fights in the first round.

The first professional meeting took place on January 5, 2013; Emily Kagan was Rose’s opponent at Invicta FC 4: Esparza vs. Hyatt. Namajunas won in the third round with a rear-naked choke. The second fight against Kathina Catron brought a victory at the 12th second, but the ensuing battle was unlucky for Namajunas: she lost to invincible Tecia Torres on July 13, 2013.

The same year, in December, the athlete signed an agreement with the UFC and participated in the 20th season of The Ultimate Fighter. It marked the beginning of the Strawweight tournament in the organization. Rose defeated Alex Chambers and crashed Joanne Calderwood in the second round of the quarterfinal; the semifinal against Randa Markos was successful for her.

In 2014, the woman challenged the champion Carla Esparza at The Ultimate Fighter: A Champion Will Be Crowned Finale. However, Esparza did not give in and surpassed Namajunas in the third round. However, Rose gained two bonuses, $25 000 each, for the fight against Joanne Calderwood.

On May 23, 2015, Namajunas was supposed to fight Nina Ansaroff, but the opponent fell sick several hours before the fight, and it had to be canceled. However, their meeting was reportedly possible.

On October 3, fans could see Namajunas and Angela Hill in the ring; the former athlete won. On December 10, Rose replaced injured Joanne Calderwood and fought against Paige VanZant. She was dominating from the very beginning and won with a submission; however, the opponent kept resisting for five rounds.

In 2016, Namajunas faced Tecia Torres for the second time. The rematch was more beneficial: Rose gained the victory, and the jury’s decision was unanimous. Further on, she met with Michelle Waterson and defeated her in the second round.

The UFC Women’s Strawweight Champion Joanna Jędrzejczyk was a fierce rival; few MMA lovers expected Rose’s victory. Still, she did it with a knockout in the first round. The title defense was held on April 7, 2018, and Namajunas proved to be stronger than her old rival Jędrzejczyk for the second time.

The woman is dating the UFC heavyweight fighter Pat Barry. She says she liked him at once, but it took the couple pretty much time to start talking. They had a sparring, and Namajunas hit Par’s face; perhaps, he fell in love with her at that moment, Rose jokes.

The athlete confessed that her father’s disease, abuse, and family issues had an impact on her life. She often emphasizes in her interviews that people should not hide their problems and pretend that everything is fine.

Namajunas is proud of her Lithuanian roots; she likes Lithuanian cuisine and its considerable difference from American fast food.

Fans can follow Rose’s life on Instagram: she posts photos from practice, fights, and daily routine. The athlete’s shape is perfect: her height is 5.41 feet (165 cm.), and her weight is 114.64 lbs. (52 kg.); she does not hesitate to share her pictures in a swimsuit. In 2017, Rose appeared naked on the cover of Women’s Health.

Following two victories, Rose needed a break and spent some time outside the ring. In November 2018, she reported her comeback and started preparing for another battle.

Jéssica Andrade became the athlete’s first opponent; the event was held on May 11, 2019, and brought Rose a loss.