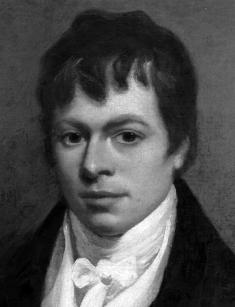 The Scottish poet Robert Burns went down in history of the global literature as a genuine patriot of his people. He came from an ordinary peasant’s family and devoted his life to poetry: Burns chanted the praises of his homeland, stigmatized stupidity and ignorance, created beautiful love ballads, and carefully saved the Scottish folklore. The poet’s masterpieces are known all over the world, and many translators, for instance, the Russian writer Samuil Marshak, worked on his heritage.

Robert Burns was born on January 25, 1759, in the village Alloway, Ayrshire, Scotland. The boy’s father, William Burnes, was a farmer who married a peasant’s daughter Agnes Broun. The family lived in their own house built by William. When Robert turned seven, the father sold the house to obtain a 70-acre piece of land in Mount Oliphant where the parents moved with their children.

Thus, little Robert had to face some rough time. As the eldest kid, he had to work like an adult; eventually, his health deteriorated: Robert was weak and sickly. The family lived in the extreme poverty. Seven children had no opportunity to go to school, and the father taught them how to read and write himself. Robert and his brother Gilbert learned how to do sums and studied history and geography as well. Agnes encouraged her sons to read; they loved William Shakespeare’s and John Milton’s poems. However, the Scottish poet Robert Fergusson was the young talent’s favorite. Besides, the mother instilled the love for the Scottish language and folklore in the boy: he adored Scottish songs, fairy tales, and ballads.

When the brothers grew up, they attended a village school where John Murdoch taught them Latin and French. Robert used to study at various schools in Dalrymple and Kirkoswald, yet he had to drop to assist his father with harvesting.

Following his romantic urges, the young man began to write at 15 or 16: he created poetic declarations of his feelings to Nelly Kilpatrick, a village girl. When Robert went to Kirkoswald school, he met Peggy Thompson; he devoted her the poems “Now Westlin' Winds" and "I Dream'd I Lay".

In 1777, the young man’s life changed: the father got fed up with his misfortune and moved to Lochlea, not far from Tarbolton. To his dissatisfaction, the brothers began to participate in Tarbolton social life: they joined a village dance school and founded the Tarbolton Bachelors' Club. Soon, Robert fell in love with a local beauty Alison Begbie and devoted her many songs. Nevertheless, she rejected the young man.

1781 brought unique moments: the young man joined the Lodge St David and met Captain Richard Brown. He had traveled halfway around the world and proved to be an excellent storyteller. Brown strengthened Robert’s confidence and approved of his poetry.

The brothers sold the farm and moved to Mossgiel. Robert needed money desperately and decided to publish his poems to earn something and go to West India. Luckily, he had a lot of materials. In 1786, the young man’s debuting collection Poems, Chiefly in the Scottish Dialect was released.

The artist did not expect the success, yet the first book brought him enough money and popularity: those who liked the genre were touched by the unknown poet’s works. Thus, Burns could join the Edinburg high society.

In the course of time, the poet’s works brought him even more benefits. Several editions of his books were created, and many readers quoted his poems. Robert Burns was into satire, romanticism, and didactics; his language was simple and comprehensible. The man wrote about ordinary people’s lives, nature in Scotland, unconditional love, and merry peasant celebrations.

Literature lovers were glad to have him as their guest at literary salons and creative evenings. In 1787, the Grand Lodge of Scotland named him Caledonia’s bard.

In the course of time, Burns was bored by the high society. As he mentioned, he felt the noble people’s superior attitude because of his peasant background. In 1788, the poet returned to the village and married the woman he loved.

In 1789, Burns became a Customs and Excise bureaucrat; at the same time, he worked on Scots Musical Museum and edited everything that seemed frivolous to him. This book helped save a lot of works from the Scottish folklore heritage.

Despite his civil service and social activities, Robert Burns did not stop writing: he created Ode, sacred to the Memory of Mrs. Oswald (1789) and Tam o' Shanter (1790). In 1793, the second two-volume collection of poems was published in Edinburg. By that time, the poet was seriously ill: he had frequent heart attacks and often fainted.

In 1795, the man created the poem A Man's a Man for A' That: he praised a personality outside the limits of social groups and earnings. It was Robert’s last work. Overall, the Scottish poet left a rich literary heritage: more than 500 poems and 300 songs.

The genius was truly appreciated after his death. Thanks to translators’ work, people speaking dozens of languages got familiar with the poet’s art.

There are many biographical books about Burns’s personal life: the poet was known for his passion. He had many out-of-wedlock children. Overall, he fathered 12 children from four women. Judging by portraits, Robert was handsome; he started conquering women’s hearts from his youth.

The first illegitimate child, the daughter Elizabeth, was born when Burns was 21; the servant of his mother, Betty, was the girl’s mother. While Robert acknowledged the child, Betty rejected her. Thus, the young man’s mother and sisters brought up the kid. The village disapproved of Burns’s behavior. Although he was allowed to attend church services, he had to take a repentance bench.

Burns did not learn his lesson. Soon, he met a cheerful beauty Jean Armour, the daughter of a wealthy contractor. The young man immediately fell in love; new poems were flowing. Some of them appeared in the poet’s first collection. In 1786, Jean got pregnant, and the couple married secretly. The woman gave birth to twins. However, her father got furious and annulled the document: he did not want a poor and cheating son-in-law.

Upset and offended, Robert found comfort with Mary Campbell who died of typhoid soon. In Edinburg, the heartbreaker’s life was full of adventures. By the time he came back to the village, his lover Jenny Clow had given birth to a son Robert. Finally, some Ann Park became the fourth woman who bore the illegitimate daughter Betty.

In 1788, Robert married Jean Armour who had been thrown out of the house by her father and lived with an acquaintance. Overall, she gave birth to nine children six of whom died in infancy. According to the poet’s biographers, he did not stop to cheat on his wife until the end of his life.

The poet spent his last years in poverty; he was weak because of a heart disease he had “earned” in his childhood while working hard on a farm. In 1796, Burns moved to Dumfries and joined the Royal Dumfries Volunteers.

The rheumatic heart disease was the cause of death. The Scottish poet was buried in Dumfries with great honors.

Burns’s fans celebrate his birthday on October 25: they call it “Burns Night”. Haggis is an indispensable part of the event: the poet loved it and devoted it one of his works.

“They never, never can divide My heart and soul from thee”.

“And there’s a hand my trusty friend and give a hand o’ thine! And we’ll take a right good-will draught, for auld lang syne”.

“Then catch the moments as they fly, And use them as ye ought, man: Believe me, happiness is shy, And comes not aye when sought, man”. 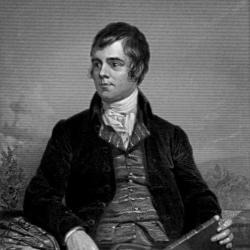