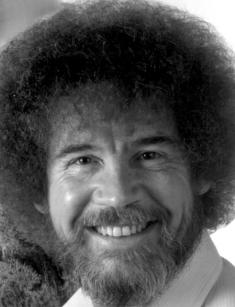 Bob Ross is an American painter, creative popularizer and TV presenter, inventor of the quick-painting technique, which became known because of The Joy of Painting instruction show, which was broadcast from 1983 to 1994 on PBS in the United States, Canada, Latin America, and Europe. Ross became even more popular, posthumously, after his show launch on Youtube and re-release of the tutorials by the Melodysheep and PBS Digital Studios.

Robert Norman Ross was born on October 25, 1942, in the American city of Daytona Beach, Florida. His father Jack Ross, a hereditary Cherokee Indian, was a carpenter. His mother Ollie Ross worked as a waitress in a café. Bob spent his childhood taking care of the wounded animals that lived nearby. Among his wards were an armadillo, a snake, an alligator, and two squirrels, that subsequently participated in the painter's television program.

Ross dropped out after middle school and began to learn carpentry from his father. In the workshop the boy lost part of his left index finger; fortunately, the injury did not affect the way he held the palette while drawing. In 1961, the 18-year-old boy joined the United States Air Force as a medical records technician. He finished his military career as the first sergeant of the U.S. Air Force Clinic at Eielson Air Force Base in Alaska, where he first saw snow and mountains which later became the themes of his various works.

During his service, Bob became interested in painting. He created his first paintings for sale, and he painted them in short breaks between the orders of his superiors. Thus, the young artist took the first step towards creating the quick-painting technique, which made him known to the whole world.

Bob enrolled in an art class at the Anchorage U. S. O. Club, where he often argued with teachers who preferred abstract art to realism. Then Ross saw a TV show called The Magic of Oil Painting hosted by German painter Bill Alexander.

The show advertised the style called "alla prima" (Italian for "first attempt"), which allowed to finish a painting in 30 minutes. Bob studied this "wet-on-wet" technique, started painting Northern landscapes of Alaska, which were sold well. When the income from the painting exceeded his military salary, Ross retired and decided to devote himself to art entirely.

Bob went to Florida in order to acquire additional skills in drawing. Then he got a job in Bill Alexander's company named "Alexander Magic Art Supplies Company" as a traveling salesman and tutor. Soon Ross set up his own business and started giving his private lessons in the United States of America.

Since 1983, a non-profit PBS television station began broadcasting Bob's The Joy of Painting show on the WIPB channel in Muncie, Indiana. The show first aired on January 11, 1983, and was broadcast right until May 17, 1994, in many countries, including the digital sub-channel network Create.

In the half-hour episodes, Ross gave step-by-step oil painting tutorials, which involved the use of a limited color palette. After some time, Bob created "Bob Ross Inc.," which sold art supplies, how-to books and marketing painting classes in "Bob Ross method," taught by instructors who adopted their mentor's experience.

On air the master advertised the products of the corporation, promoting them on the world market. Ross attracted an audience by bringing to the show the animals, which he kept fostering. Pet squirrels Peapod and Wirrelly Brown stole the spotlight more than others and became frequent guests on the show and models in the artist's photos.

The range of fans of the Ross show expanded thanks to a simple and effective way of studying that does not require material costs for art supplies. The host recommended using inexpensive canvases and cheap, non-odorous paint-thinner. Bob argued that every person has a talent, and he or she can become an established artist, the only necessary thing is to take into account time, practice and support.

The master taught the audience the "wet-on-wet" oil painting technique, a feature of which was the addition of the paint on top of still-wet paint. Ross worked with large one-and two-inch brushes and painting knives which allowed him to draw trees, clouds, sea, and mountains in a matter of seconds.

Every picture began with simple strokes which at first appeared as smudges of color. As the artist added more and more strokes, the chaos turned into complex, beautiful landscapes.

Ross created three versions of almost every painting. The first one he painted before the show, and it sat off-camera. The master referred to this piece while painting the second version which was created directly on set. It stayed in the Studio as a memento. The third version of the work, detailed and brought to perfection Bob included in his instructional books. According to the artist, he created more than 30 thousand paintings in his lifetime.

Ross was a very private person who didn't like to talk about his personal life. Some details of his biography became known in 2011, after the release of the documentary Bob Ross: The Happy Painter.

It turned out that Ross' first wife was Vivian Ridge who gave birth to a son Steven soon after the wedding. The boy showed a talent for painting, and after attending his father's training course, he became a certified teacher of "Bob Ross method."

In 1977 the artist divorced his wife and found a new lifetime companion. The couple lived together for 15 years and had no children together. In 1992 Ross' second wife, Jane, died of cancer. Two months before his death, Bob married his third wife, Linda Brown.

In the spring of 1994, Ross was diagnosed with lymphoma, which forced the artist to retire from work on television. On May 17, 1994, aired the last episode of The Joy of Painting. Only the closest people knew about the master's diagnosis; it was kept secret from the general public.

On July 4, 1995, Bob Ross died, the tumor led to metastases and caused the death of the painter.

The artist was buried at Woodlawn Memorial Park in Gotha, Florida. On his grave, there is a memorial plaque with the inscription "Bob Ross, television artist." 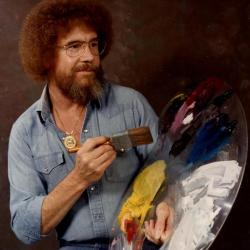