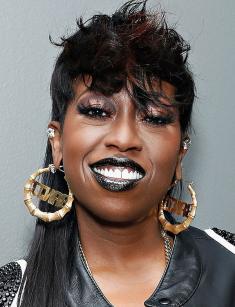 Missy Elliott seems to have chosen the words of great Andy Warhol as her motto in life: the artist believed that any problem, even the most enormous one, could be solved by the question: “So what?” The celebrity had to endure her father’s abuse and molestation from her cousin as a child; however, the woman managed to conquer the world of music, create six platinum albums, and turn into a superstar.

Melissa Arnette Elliott was born on July 1, 1971, in a Portsmouth Naval Hospital. She was the only child of Ronnie and Patricia Elliott.

The mother worked as a dispatcher for a power company; the father was a retired marine who got hired as a welder at a dockyard. When the man was still in the army, the family resided in Jacksonville where the girl taught the basics of singing in a church quire; later, the Elliotts came back to Virginia.

Melissa was fond of school: it gave her the chance to communicate with friends. The girl did not work too hard and never liked studies; she passed tests better than others thanks to her natural gifts. As a result, the would-be star was transferred two years ahead of her previous class. Elliott was not satisfied and did everything to return to her peers.

The singer’s childhood was pretty difficult. The hot-tempered father had sadistic inclinations: he often beat his wife and daughter and threw them in the street, half-naked, at gunpoint. One day, Patricia got fed up with her husband’s behavior. She pretended to go by bus with her daughter and escaped.

At the age of eight, the girl was molested by her own cousin. Although she was not broken, the woman had many nightmares where innocent people were screaming on fire. Melissa’s fortitude is worth admiration: she found the strength to communicate with her father despite everything that had happened and provide him with financial support.

Melissa felt attracted to music from an early age; dolls were her first listeners. The young woman’s desire to sing was so desperate that she even wrote a letter to her icons, Michael and Janet Jackson; they collaborated further. Besides, young Melissa met her future producer Timbaland who participated in the group with Pharrell Williams and Chad Hugo. She immediately appreciated the band’s artistry and style.

Initially, Missy Elliott participated in the R`n`B quartet Fayze; all the women were close friends and even renamed their band into Sista later. The label Swing Mob liked the artists’ works and began to collaborate with them; the group worked on other singers’ songs and their own projects. Elliott was not much successful as a solo musician; moreover, her team split up. Under those circumstances, Melissa threw herself into producing.

The song for Raven-Symoné was Elliot’s first track; it proved to be a great hit. The artist felt elevated: she was nobody, and Raven-Symoné was a Cosby Show girl that became a superstar thanks to her composition.

In 1997, the hard-working rapper presented the debuting album; it took her only seven days to complete it. The new solo collections followed and got the platinum status. Missy Elliott has five Grammy awards; she received Best Rap Solo Performance for “Get Ur Freak On” and Best Short Form Music Video for the music video “Lose Control” starring Ciara. The songs “Work It”, “The Rain,” and “WTF” are also among the most popular tracks; one can find their lyrics on the Internet.

In 2015, the singer pleased her fans with the news about the new studio album Block Party.

In 2017, Missy shared her plans about a documentary and confessed she would love to make one and control the whole process as a director, not a mere doer. The same year, the single “I’m Better” was released; the rapper tried to make it a masterpiece, not just a chain of frames. Missy Elliott is also related to cinematography: she appeared in episodes of full-length movies and series, such as Shark Tale or My Super Sweet 16.

The world of show-business is harsh; it tolerates no secrets and tries to reveal as many personal moments as possible. Missy Elliott has not become an exception.

Some media claimed the musician was gay; they spread the rumors that she dated many stars: Olivia Longott, Karrine Steffans, Nicole, 50 Cent, and even the friend of the youth Timbaland. However, none of these speculations was confirmed.

In 2018, journalists were talking about Melissa’s relationship with Eva Marcille; the latter had to deny this information officially.

The rapper is not married and has no children. She prefers exotic first-class cars and houses.

In summer 2108, Missy was busy with the collaboration track with Skrillex; the release date was not revealed. The same year, the hit “Get It” with Busta Rhymes and Kelly Rowland was premiered; the songs with Ariana Grande, Ciara, and Fatman Scoop followed.

In January 2019, Lizzo and Missy Elliot presented their collaboration. At the same period, the excellent news came through: the woman became the first hip-hopper included in the Songwriters Hall of Fame.

The musician loves covers on her songs and often posts them on her Instagram along with personal photos from concerts, rehearsals, and vacation; however, she avoids posting swimsuit pictures. In 2017, the celebrity had a word battle with Nicki Minaj on Twitter. Fans are looking forward to the musician’s new songs.