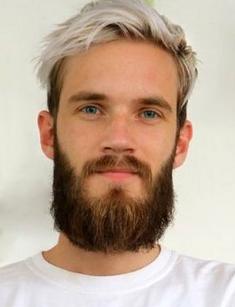 PewDiePie – is a video blogger who became famous through Youtube. The gamer receives income using internet technologies. In 2014 according to the British newspaper The Guardian the income of the creative author of the videos reached $7.4 million.

The real name of the blogger hiding under the name PewDiePie is Felix Arvid Ulf Kjellberg. He was born on 24 October, 1989 in Sweden. The boy's mother was connected with modern technology, as she worked as an IT-Director in KappAhl company. There are two children in the Kjellberg family: Felix has a sister named Fanny.

As a child, the boy showed interest in creativity and his kindergarten teachers said he had the potential to become an artist. Felix would often sketch the characters of his favorite video games, with which he was obsessed. He was often sick as a child and while staying at home was allowed to spend time playing the game console.

It didn't affect Felix's academic record. Kjellberg studied at Highschool of Gothenburg Region and was doing well before his teenage years. At this turning point, he bailed on school and drawing, stopped taking an interest in his family matters, and closed himself off from his friends.

Nothing was changing in the life of the boy until he took matters into his own hands. The first thing he dealt with was his education. After some time, the student got the highest score in physics among 200 students. This influenced the decision to enter the Chalmers University of Technology. The success inspired Felix and encouraged him to return to creative work. He implemented his projects with the help of Photoshop. His plans quickly went by the board when in 2001 the student became interested in video blogging and started a Youtube channel.

Drawing classes played an essential role in the biography of the talented boy. Once Felix was offered to display his works in an art gallery. He agreed and then spent his fee to buy a computer. First gaming videos which the guy posted on Youtube appeared with the help of the new equipment and a simple webcam. In 2010 he came up with the name PewDiePie and started shooting short videos. The first of them was "Minecraft Multiplayer Fun".

The interest of users is attracted by the format of the channel that he promotes. A young man streams himself playing games. At first, he commented the process behind the scenes and then began shooting himself at the moment of action. Horror and action-games attracted the blogger more than any other types of games, so he specialized in the streaming let's plays of the games like Amnesia.

Now the gamer remembers that he wasn't confident when he started his career, but the followers that appeared quickly supported him through comments and he began his productive activity. The channel grew rapidly and by 2012 comprised two million followers. In the same year, PewDiePie became a participant of the contest "King of the Web." The young man managed to win it from the second attempt. He won the title "King of the Web" several times. He donated his cash winnings to the World Wildlife Fund.

In the same period, Felix's channel received the status of the 1st among all Youtube channels from OpenSlate. In 2013, the number of PewDiePie subscribers increased to 6 million. In the same year, Felix's videos were awarded prizes in the nominations "Most Popular Social Show" and "Swedish Social Star Award."

The blogger's channel was called the fastest growing, and by August 2013 he became the leader among the founders of this sphere. This achievement of the young man was put into Guinness World Records book. In 2014, already 29 million followers were watching PewDiePie's activity. The video "A Funny Montage" got the highest number of views.

PewDiePie collaborates with game developers in the indie style, which attracts the attention of new fans to the channel. Since 2011 Felix talks about his adventures, calling such videos Fridays with PewDiePie. The blogger actively collaborates with other media personalities, regularly appearing in the videos with other famous people. He participates in web-shows, including the project "Epic Rap Battles of History." The creator became a judge in the program "Internet Icon."

Felix's positive vibes attract followers, and the young man tries to reach success in any sphere. Therefore, in 2015 the book This Book Loves You. In the book, the blogger gives supportive advice. A collection of aphorisms and jokes proved to be popular with the public.

In 2016 PewDiePie together with Outerminds Studio released a video game PewDiePie: Legend of the Brofist for smart-phones and gadgets. It instantly reached the number one spot among the most popular apps in several countries. By 2018, Felix's account reached 60 million subscribers. The blogger calls his followers "bro". He is happy to make contact with subscribers and speaks warmly about his fans.

Fame and recognition do not bring any pleasure to the gamer. He is used to a modest lifestyle, even though in 2015 he was included in the list of the 30 most influential people on the Internet.

Despite the stereotypical view of bloggers and gamers, Felix has a versatile personality. He has many interests and hobbies, including golf, tennis, traveling and acting. PewDiePie is happy in his personal life. He met his girlfriend, Marzia Bisognin, on the Internet. She also had a personal account on Youtube which the blogger kept under the name Marzia. Marzia talked about cosmetics and ladies secrets and had a large audience.

The girl lived in Italy, which became a difficulty in the development of relations between the lovers. At first, Felix had to move to the homeland of his girlfriend, but later they moved together to the British town Brighton. In the spring of 2018, PewDiePie proposed to Marzia.

Today, the gamer continues to record videos for Youtube, being the founder of blogging. He demonstrates games and makes merch-videos on a variety of equipment.

Felix works with charities, participates in the projects of the World Wildlife Fund and helps children's hospitals. His initiatives include campaigns in support of developing countries. The campaign, organized to help countries experiencing a shortage of drinking water, raised $450 thousand. PewDiePie attracts the attention of his subscribers to numerous charity projects, the results of which he comments on his channel. 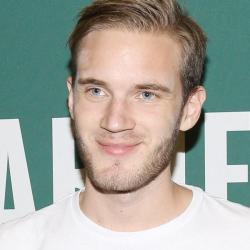