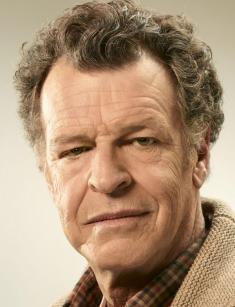 The Australian actor John Noble is not going to stop, taking part in dozens of films and TV series, as well as becoming a director of theatrical performances. He was famous primarily due to the role of Denethor in the cult trilogy directed by Peter Jackson The Lord of the Rings and Henry Parrish in the mystical adventure television series Sleepy Hollow.

Not much is known about the early biography of the future famous actor. John Noble was born on August 20, 1948, in the South Australian small town of Port Pirie (its population is about 15 thousand inhabitants).

After graduating from theater education in his youth, Noble got a job as Artistic Director of the Stage Company in South Australia in 1977 and He was a teacher of dramatic art later. He held these positions for ten years, after which he changed his occupation.

In 1997, John was appointed a head of the department of acting and voice acting at Sydney College of the Arts St. Brant.

The first appearance of Noble in the feature film took place in 1988. It was the horror The Dreaming, which was made in Australia. The actor played a secondary role as Dr. Richards. Further, the aspiring artist appeared, as a rule, in low-budget projects, which were shot in the homeland of John before the beginning of 2000.

The premiere of the action-detective based on the novel in verse The Monkey's Mask of the writer Dorothy Porter's was released in 2000. This movie was the first in the still not too extensive filmography of the actor. This film gained popularity outside Australia. Noble turned into Mr. Norris, whose student son was murdered in cold blood.

After two years, the man was invited for one of the brightest and memorable roles Denethor in an adventure fantasy The Lord of the Rings: The Two Towers based on the work of John Ronald Reuel Tolkien. However, his character appeared only in the director's version in this part of the trilogy. But Denethor was an integral part of the universe in the sequel titled The Lord of the Rings: The Return of the King, filmed in 2003. John received many prestigious film awards - Screen Actors Guild Awards, Critics' Choice Awards and others for his participation in the project.

In 2005, Noble took part in the filming of the action movie Running Scared with a bright star cast Paul Walker, Vera Farmiga and Cameron Bright. The film about the small gangster Joey Gazelle caused different reviews of film critics but ordinary viewers liked it, the project is still considered one of the best in the director's biography of Wayne Kramer.

The next movie with John Noble failed at the box office and had only $ 13 million worldwide. The historical drama One Night with the King was released in 2006, based on the novel Hadassah: One Night with the King. Critics liked the visual range of the film but they were disappointed in too long timing and sluggish plot.

In 2008, the actor was invited to star in one of the most important television projects with his participation. It was a science fiction series Fringe, in which Noble turned into Walter Bishop 5 years in a row. John won Saturn Awards in the nomination Best Supporting Actor on Television for the role of the doctor. The artist again had to try on the image of a medical worker John Madsen in the Australian drama series on medical subjects All Saints.

In 2013, Noble was again very lucky. He got a job in the mystical horror Sleepy Hollow. The actor played one of the main roles Henry Parish (Jeremy Crane), who is the son of Ichabod and Katrina Crane. The series, which lasted four seasons (the last episode was released on March 31, 2017), is based on Washington Irving's story The Legend of Sleepy Hollow. Film critics and viewers approved the project.

Since 2015, John starred in the detective series of American production Elementary at the same time. He played the role of the father of the great and brilliant detective Sherlock Holmes named Morland for 13 series. Further in the creative life of the actor was involved in several series: The Blacklist, Devil's Playground, Forever, The Librarians, Dark Matters: Twisted But True, DC's Legends of Tomorrow, Salvation.

An interesting fact is that the first success that led to the world recognition of the artist took place only when Noble was already 40 years old. This case proves that everybody can achieve popularity in the acting field, not as yesterday's graduate of high school theater. The example of Noble inspires us to go to our dreams despite the stereotypes.

The actor John Noble has the wife Penny and three children Samantha, Jess and Daniel. His wife is the director of the yoga center and the eldest daughter is an actress, who starred in the movies Hellgate, See No Evil, Gabriel, as well as in one series of the series Fringe with his father.

Two other children of John and Penny are engaged in journalism and business. The family of Noble lives in the United States.

The artist is an active user of the social network Twitter, he puts the photos from professional and personal life there and communicates with fans too.

Now the Australian actor continues his favorite activity. For 2019, the release of several projects with the participation of Noble: the American thriller Nameless and the cartoon Guardians of Luna, in which John voiced Constantine Voira. Noble's net worth currently is under review.

Now, John Noble's net worth is estimate at ‎$3 million.