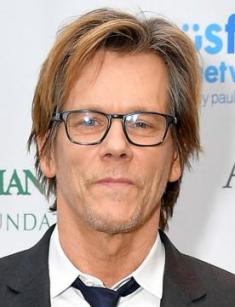 Actors do not usually play prominent roles in Oscar-winning films at the beginning of their careers. Outstanding Marilyn Monroe appeared on the screen saying a single line, Sylvester Stallone first played in an adult film, Brad Pitt worked as an extra, George Clooney played in talk shows, and Kevin Bacon started with soap operas. However, it did not prevent them from making it into the film industry and winning the hearts of fans.

A son was born on July 8, 1958, in the large family of the architect, who was later the face of the Time Magazine, and the elementary school teacher. Kevin was the youngest of six children: Eleanor, Hilda, Karin, Kyra, and Michael. Later, he and his brother created a music band, playing country and folk-rock music in local cafes. In 2018, they released the ninth album.

As a child, he dreamed of becoming a pop star, and as a teenager, he decided to try his hand at acting. He appeared on the theatre stages in Pennsylvania, his native Philadelphia, and New York City. The first of them, the Pennsylvania Governor's School for the Arts, strengthened the young man's resolve.

"I wanted life, man, the real thing. The message I got was 'The arts are it. Business is the devil's work. Art and creative expression are next to godliness. Combine that with an immense ego, and you wind up with an actor," Bacon said.

At the age of 20, Kevin appeared in the comedy about the opposition of student fraternities, and it was full of locker-room jokes. However, he did not like this experience and had to return to the theater stage and attend auditions again. He tried to play in the TV series while working as a waiter.

The beginning of the 80s was successful for the ambitious actor. He appeared in Friday the 13th and Diner, drawing the attention of critics. The man also won the Obie Award and made his Broadway debut. The young rebel starred in the box-office smash Footloose and soon appeared on the cover of People magazine. To prepare for the role, Bacon enrolled at a high school as a transfer student named "Ren McCormick."

In 1995, Empire magazine called the blue-eyed brunet one of the 100 Sexiest Stars in film history.

The fantasy movie Tremors and the film Flatliners, which was remade in 2018, made the actor very popular. However, at that time, Bacon was concerned about another problem, choosing the parts that fully revealed the character, instead of leading roles. So, he appeared in the dramas about the investigation into the mysterious murder of the 35th President of the United States and the violent death of a marine.

“I've heard people say you have to love the characters you play. I don't feel that way. I've played a lot of people that I don't love at all,” Bacon said.

He wanted to see more male nudity in television shows and films, saying that he was ready to play a naked wizard in Game of Thrones and was upset that the movie about the relationship between Anastasia and Grey did not show scene with Jamie Dornan 100% naked.

Thanks to his acting talent and the ability to portray any character, Bacon has won prestigious awards and received a star on the Walk of Fame. His filmography includes more than 150 projects, and he has also voiced animated and short films.

His personal life has not changed for a long time. Having met on the set of Lemon Sky (the celebrity considers it to be difficult and his best work), Kevin and Kyra Sedgwick later married and even collaborated in four films. By the way, the young man made a very creative marriage proposal. He put an engagement ring in the bottom of a Christmas stocking.

They have two children: Travis (1989) and Sosie Ruth (1992), who also try their hand at acting. The spouses have two Golden Globe Awards and one credo – not to take the tips for happy family life from the stars. One of the man’s favorite quotes about a husband and wife:

"Keep the fights clean and the sex dirty."

In 2011, it turned out while filming in a television program that the spouses are distant relatives. The couple also starred in the music video of rapper will.i.am and loves to dance. By the way, the actor’s dancing in Footloose was repeated by the hero of Marvel's The Avengers, and Kevin was also referenced in Guardians of the Galaxy for his role in the 1984 movie.

Perhaps the only sad story in his life is the loss of money due to swindler Bernard Madoff. Fans were even concerned that it could have had a negative impact on the couple's relationship. But everything went well, Kevin and Kyra celebrated their pearl wedding anniversary. On social media, people can find a lot of their pictures, including love confessions and compliments for the wife.

It is known that Bacon headed the film production of the TV series City on a Hill, produced by Kevin, Ben Affleck, and Matt Damon, and starred in Tremors, a continuation of the 1990 smash hit.

Despite his age, he keeps fit (his height is 5.84 ft. (178 cm), and the weight is 174.165 lbs. (79 kg)). He can play a dozen musical instruments. Kevin loves everything related to zombies, including books, movies, etc. The man hates to give toasts and considers himself to be a proud man. His favorite actress is Meryl Streep.

Kevin is an active Instagram and Twitter user; he regularly posts funny pictures, writes his thoughts and impressions. According to media reports, now he has an estimated net worth of more than $ 30 million.

In 2007, he created SixDegrees.org, a charitable foundation, which works successfully to the present day. He filmed in commercials for the EE mobile network and U.S. egg industry.