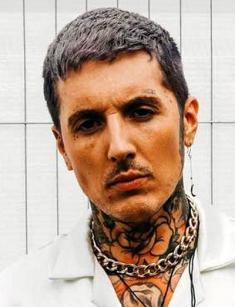 The lead vocalist of the British rock band Bring Me the Horizon, Oliver Sykes, founded the group, when he was a teenager, and fulfilled his childhood dream of playing hard rock. The group performed with varying success in the homeland because they were called the best and the worst band in the UK. Sykes was not upset about the failures and continued to be involved in scandals. The musician is known for defiant behavior and eccentric image. The young man has tattooed nearly his entire body (there are over 50 pictures).

Oliver Sykes was born on November 20, 1986, in Ashford, England, to Ian Sykes, an entrepreneur, and Carol Sykes. Soon, the parents went to Australia, where they often moved searching for a job. The family returned to the United Kingdom when the son was about eight years old and settled in Sheffield, where the boy spent his childhood.

Oliver attended school in Stocksbridge, and the teenager liked the humanities such as literature, languages, art. He later said that it was here where he became interested in music. The school in Stockbridge is famous for its graduates. The musicians, Alex Turner and Matt Helders (Arctic Monkeys), also studied there and were a year older than Sykes. After graduation, the young man continued his education at Barnsley College.

In 2003, Oliver decided that his passion for music was stronger than just a hobby. He began crafting tracks using the nickname Quakebeat. He performed with his brother Tom in the hip-hop group Womb 2 Da Tomb, and then he became the vocalist of Purple Curto.

In 2004, Oliver created his own band Bring Me the Horizon to play his favorite metal. Sykes used Jack Sparrow's quote from Pirates of the Caribbean creating the band’s name. It brought luck because they immediately became famous. Alternative rock was then at the peak of popularity, and listeners paid a great interest even to the demo album Bedroom Sessions of the newly-formed band.

It took two years for Sykes and the group to release the debut studio album Count Your Blessings (2006), which was warmly received by the public and critics. Sykes' unique screaming vocal style together with dark, heavy metal music intrigued the rock music fans. The band and its leader were even awarded Best British Newcomer at the 2006 Kerrang! Awards ceremony.

The successful debut made the lead vocalist of Bring Me the Horizon go crazy. In 2007, during a tour across the UK, a big scandal erupted in Nottingham. Sykes was accused of pissing on one of the female fans after the performance and then attacking her. Oliver and the label of the group denied it, but a criminal case was initiated against the singer. After two trials during the year, Sykes did not plead guilty, and the charges were dismissed.

In between concerts, the first tour and the filming of music videos Sykes and the bandmates created songs for a new album. They recorded the album Suicide Season in Sweden and released it in the USA and Europe in 2008. It was so successful that a year later, Oli realized an exciting idea to remix the disc featuring famous musicians.

The third album of the band There Is a Hell, Believe Me I've Seen It. There Is a Heaven, Let's Keep It a Secret has the very long title. It was released on October 4, 2010. Oliver’s voice was even more penetrating, and the music was significantly different from earlier works, becoming more gothic. The new album topped the Australian charts, debuted at number 17 on the Billboard 200 in the United States and number one on the UK Indie Chart.

A new scandal involving Sykes heightened people’s interest in their music. This time, fans were outraged that Oli was beaten by Sam Carter, the soloist of Architects. The video of the fight was posted on YouTube and watched by thousands of people. People began threatening Carter and even wanted to draw the attention of the authorities. Thus, Oliver and Sam had to give an interview and said that the video was just a “stupid joke.”

Sykes has also repeatedly picked a fight with American rock singer Andy Bíersack, calling him a clown because of the abundance of makeup on his face. He cracked cheap jokes at any opportunity. However, Bíersack had the wisdom not to respond to the provocation.

In 2014, Oliver confessed that for a long time he used drugs, in particular, ketamine, which influenced his inappropriate behavior. The situation aggravated so much he was on the verge of committing suicide. But, according to him, the love of hardcore fans saved the musician.

Sykes has never let fans doubt the quality of his work. Critics consider the fourth album Sempiternal, released in 2013, to be a breakthrough in their career. It showed the influence of electronic music, which gave the album a more elegant sound. The musicians become headliners of prestigious rock festivals, and their tracks topped the charts.

The new album That's the Spirit, released in 2015, consolidated the success. Then Oliver and his band went on a tour across the United States and Australia, where they had no fewer fans than in their homeland.

Oliver Sykes’s biography is not only connected with his musical career. The man also has other talents.

It has transpired that since childhood Oli has dreamed of design work. As soon as he improved his financial state, the man began developing his own clothing line Drop Dead Clothing. The artist creates mostly sportswear and casual-style clothes, which attracts young people.

The brand has become famous outside the UK and is gaining popularity on the international market. Nowadays, it is a well-established company that organizes worldwide shipping and focuses on online sales.

Another Oliver’s talent is writing. In 2013, the musician, together with another designer, launched a Kickstarter project to fund his graphic novel entitled Raised by Raptors. Within a few weeks of launching, a little less than £ 40,000 was collected on the site.

Oliver Sykes lays claim to be "the world's most tattooed rock singer." His whole body, even the head, is tattooed with symbolic pictures. But it does not hamper from attracting numerous fans, because the performer is a handsome and tall (185 cm) man who always has a great hairstyle.

In 2015, the rock singer decided to leave behind a stormy bachelor life and got married, announcing the news to the whole world on the official Instagram page where he published a photo. The singer's wife was Hannah Pixie Snowdon. The couple dated since December 2013 and celebrated the wedding in Tuscany, Italy.

However, the marriage was short-lived. In 2017, Oliver divorced Hannah. The second wife of the musician has become model Alissa Salls. Sykes does not have children.

In 2018, Oliver and Bring Me the Horizon released a new track “Mantra,” which has become the first single since 2015.

The song is supposed to be included in the new album, which the band is recording now. 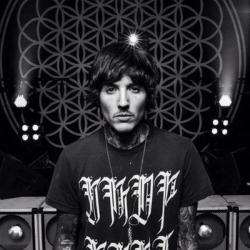