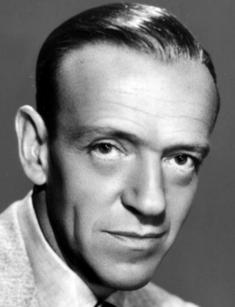 The singer, dancer and choreographer Fred Astaire turned the public's views on the genre of musical cinema for 76 years of his stage career. Finding his way to the heart of the strictest critic, he played dozens of memorable roles and won many prestigious awards and prizes. Each number performed by the actor became a new page in the history of a dance, which influenced the work of such masters of the stage as Rudolf Nureyev, Michael Jackson, and Bill Robinson, Mikhail Baryshnikov.

Frederick Austerlitz is known worldwide under the pseudonym Fred Astaire was born on May 10, 1899, in Omaha, located in Nebraska on the banks of the Missouri River. His parents were not native Americans, inherited German, Austrian and Czech-Jewish roots from their ancestors.

The father of the future actor, Fritz Austerlitz, worked in a brewing company and his mother was responsible for the education of two children and tried to make a career of her creative, gifted daughter Adele.

Choosing a dance and song genre, Ann Austerlitz dreamed of creating a duet with a brother and sister and forced the boy to take choreography lessons and learn to play musical instruments since childhood. Frederick reluctantly mastered the piano, accordion and clarinet and determined his future in show business.

Instead of a secondary school, the children went to study in a dance studio in New York and then entered the Alviene Master School of the Theatre and Academy of Cultural Arts. The audience liked brother and sister when they first appeared on the stage and the mother could arrange regular performances and offered to replace the name, associated with the battle of the three emperors, to a short and memorable nickname Astaire.

Early in his career, a fixture of the Fred costume was a tailcoat and a classic black top hat that hid significant difference of dancers in growth. Later, when Adele grew up, parents were forced to take a break in the performances, waiting for the children will be better suited to each other on the stage.

In 1915, they appeared in public with improved numbers, containing elements of the step. By this time, Fred was seriously interested in dancing and took the role of a choreographer and stage director. Experimenting with music, the young man met the composer George Gershwin and chose his composition for the dance called "Over the Top," which blew up the Broadway stage in 1917.

After the successful debut, the young dancers were invited to participate in the musical "The Passing Show of 1918" regularly and the Atlantic coast learned about the duo due to the tour performances in London theatres by the 1920s. Especially the audience liked the musicals Funny Face, Lady, Be Good! and The Band Wagon, where the couple perfected the skill of tap dancers.

In 1932, Adele married, and Fred, forced to start a solo career, went to conquer the film industry at the end of another Broadway season. The dancer continued his theatrical career and shone in the production of The Gay Divorcee for some time and other box office performances with his new partner Claire Luce, unable to gain a foothold in Hollywood.

In 1933, one of the most successful producers of Hollywood David Selznick saw the talent of an outwardly unattractive Astaire, whose was 5,8 feet (177 cm) tall and weighed about 154 lbs (70 kg) and signed a contract with him, providing work at the Metro Goldwyn Mayer Studios. The debut in the movie for Fred was the movie musical Dancing Lady, where he acted as a partner of the super popular actress Joan Crawford.

Then there was the first joint work with a young budding actress Ginger Rogers in the movie Flying Down to Rio. The directors paid serious attention to Astaire and persuaded him to continue cooperation with the new partner, when the couple danced, moving on the covers of the white pianos elegantly.

Throughout the 1930s, Fred and Ginger were one of the Hollywood couples in demand and starred in a dozen musical films, the most popular of which were the comedies Top Hat, Swing Time and Carefree. Astaire required a constant movement of the camera and made sure that the numbers were an integral part of the storyline on the set. He was meticulous about his partners and rehearsed until he was delighted with the result.

Fred continued to improve himself as a dancer and experimented in different genres, working with stars such as Bing Crosby, Joan Fontaine and Eleanor Powell at the same time with the shooting. In 1941, a new partner of Astaire became Rita Hayworth, the daughter of a Latin American dancer, whom Fred admired in his youth. Having formed a duet full of mutual understanding, the actors starred in the films You'll Never Get Rich and You Were Never Lovelier.

However, the team broke up quickly and Fred could not find a permanent dancer. He collaborated with the young beautiful Joan Leslie, then tried to work with Lucille Bremer and Gene Kelly but felt a lack of coherence and every day was more disappointed in the career of a film actor with every day.

Although the film Yolanda and the Thief, Blue Skies and Ziegfeld Follies became mega-popular hits, which enriched the creators, Astaire decided that his career is over in 1946 announced about his departure from the cinema.

The former actor took up teaching and organized his dance studio, which opened branches throughout the country. The lack of public attention weighed on the actor and he returned to Hollywood with the film Easter Parade in 1948, filmed to the music of the famous composer Peter Lawford.

Then Fred participated in the film Three Little Words and Let's Dance with varying degrees of success and returned to stardom in 1951, playing the main role in the musical comedy Royal Wedding, which tells about talented New York dancers, who were invited to the wedding ceremony of Elizabeth II.

It seemed that the creative career was adjusted but he had the failure, which was at the same time with the tragic events in the personal life of the actor. The creators of the films Funny Face and Silk Stockings, as well as new partners Audrey Hepburn and Cyd Charisse, who loaded him with work and left no time to experience, helped the dancer to get from the abyss of problems. Although Astaire and the company spent a lot of effort on the production of these movies, they were not popular and did not bring commercial success.

As a result, Fred left the cinema again, leaving a memory of his rich filmography, a music album called The Astaire Story and the single of the composer Irving Berlin called Cheek to Cheek, which was in the Grammy Hall of Fame in 2000.

Fred was involved in the creation of music and dance programs, which received Emmy Awards nine times and appeared in minor roles in movies. The most famous works of this time were the cult movies of Francis Ford Coppola`s Finian's Rainbow and the disaster film The Towering Inferno of Irwin Allen.

Judging by the photo, Fred Astaire was not a classic Hollywood handsome man but he enjoyed success with the beautiful half of humanity throughout his life thanks to the close attention to his appearance.

In his youth, the actor experienced several violent short affairs and found a woman in 1933, who became his wife for 21 years. It was a lady from the high society called Phyllis Potter. She was married to a prominent member of the American community and had a son from her first husband before meeting Astaire.

Fred and Phyllis lived a happy life and became parents of two children, who were born in 1936 and 1942. Despite his abundance of partners, who surrounded the dancer on the set regularly, he always remained faithful to his wife and experienced her death sincerely from lung cancer in 1954.

Astaire needed to live to a ripe old age to recover from the tragedy, the professional rider Robin Smith came in his life, who became the second wife of the famous dancer in 1980.

A new marriage kept a close relationship with Fred's children and grandchildren and the artist spent in the circle of a large and happy family the rest of his life.

Astaire always took care of his health, he looked cheerful and fit in old age. Therefore, his death from pneumonia on June 22, 1987, was a surprise not only for fans but also for the relatives of the dancer. His net worth was around $ 10 million.

Before his death, Fred asked to thank all those, who supported him throughout his career, addressing some words to his young friend and colleague Michael Jackson.

The legacy of the actor includes dozens of films, not losing the audience thanks to the care of the daughter of the actor Ava Astaire-McKenzie. In 2000, the heiress of the great dancer opened a memorial plaque in Ireland and participated in events, dedicated to the brightest moments of the biography of the talented father in 2008.