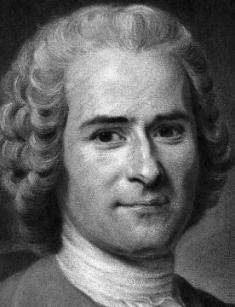 Jean-Jacques Rousseau was born in Geneva on June 28, 1712. This French philosopher, the writer of the Enlightenment, is known for educational works and theories. Rousseau is said to be the founder of romanticism in philosophical science. Some scholars believe that Jean-Jacques Rousseau instigated the Great French revolution to some extent.

The childhood of Franco-Swiss Jean-Jacques Rousseau can not be called carefree. His mother, Suzanne Bernard, died in childbirth, leaving him in the care of his father, Isaac Rousseau, who worked as a watchmaker and moonlighted as a dance teacher. Isaac could hardly cope with the death of his wife but tried to raise Jean-Jacques with extra-love and care. This was a significant contribution to the development of the younger Rousseau.

The child from a young age studied the works of Plutarch, read Astraea with his father. Jean-Jacques imagined himself in the place of the ancient hero of Scaevola and even burned his hand. Soon Rousseau senior had to leave Geneva because of an armed attack, but the boy remained in his home with his uncle. The parent had no idea that the son would become a significant philosopher of this era.

Later, his relatives sent Jean-Jacques to the Protestant boarding house of Lambercier. A year later, Rousseau was transferred to a notary for training, and then to an engraver. Despite the heavy workload, the young man found time to read. Education taught Jean-Jacques to lie, pretend, and steal.

At the age of 16, Rousseau escaped from Geneva and ended up in a monastery located in Turin. The philosopher spent nearly four months there, and then he entered the service of the aristocracy. Jean-Jacques worked as a footman. The count's son helped the boy learn the basics of the Italian language. But Rousseau got his writing skills from "mamma" - Madame de Varan.

In some works, personally written, Jean-Jacques Rousseau presented exciting facts of his biography. Thanks to this, we learn that the young man worked as a Secretary and home tutor before he came to philosophy and literature.

Jean-Jacques Rousseau is, above all, a philosopher. Representatives of science still study the books Social Contract, New Eloise, and Emile. In his works, the author tried to explain why there existed social inequality in society. Rousseau was the first to try to determine whether there was a contractual way of creating statehood.

Jean-Jacques regarded the law as an expression of the collective will. He had to protect the representatives of society from the government, which was not able to abide by the law. Property equality is possible, but only if a collective will is expressed. Rousseau suggested that people make their laws, thereby controlling the behavior of the authorities. Thanks to Jean-Jacques Rousseau, they created a referendum, reduced the terms of Deputy powers, introduced a people's legislative initiative, a mandate.

The New Eloise is a crucial work by Rousseau. The novel traces the plot of Clarissa, created by Richardson. Jean-Jacques considered this book the best work written in the epistolary genre. The New Eloise presented 163 letters. This work led to the delight of French society, as in those years, this method of writing novels was reputed to be popular.

The New Eloise tells the story of the tragedy in the face of the main character. She is pressured by chastity, preventing the girl from enjoying love and submitting to the enticing temptation. The book won the respect of people and made Rousseau the father of romanticism in philosophy. But the literary life of the writer began a little earlier. In the middle of the XVIII century, Rousseau was in the service of the Embassy in Venice. Soon the man found his vocation in creativity.

In Paris, there was an acquaintance that played a significant role in the fate of the philosopher. Jean-Jacques met Paul Holbach, Denis Diderot, Étienne Bonnot de Condillac, Jean le Rond d'Alembert, and Grimm. Early tragedies and comedies did not become popular, but in 1749, while imprisoned, he read about the competition in a newspaper. The subject was close to Rousseau:

This inspired the author. Jean-Jacques earned popularity among citizens after the production of the Opera Le devin du village (The Village Soothsayer). This event happened in 1753. The sincerity and naturalness of the melody testified to the village manners. Even Louis XV hummed Colette's aria from the opera.

But the Le devin du village (The Village Soothsayer) added problems to Rousseau's life as well. Grimm and Holbach perceived the work of Jean-Jacques negatively. Voltaire sided with the enlighteners. The main problem, according to philosophers, was the ordinary democracy present in Rousseau's work.

Historians enthusiastically studied the autobiographical creation of Jean-Jacques called Confessions. Truthfulness and sincerity are present in every line of the work. Russo showed the readers his strengths and weaknesses, laid bare his soul. Quotes from the book are still used to create a biography of the philosopher and writer, assess the creativity and character of Jean-Jacques Rousseau.

In the sphere of interests of the educator, Jean-Jacques Rousseau was a natural man, who was not affected by social conditions. The philosopher believed that the development of the child is influenced by education. Rousseau used this idea in the development of the pedagogical concept. Jean-Jacques presented the main educational approaches in his work Emile, or On Education. This treatise, according to the author, is the best and most important. Through artistic images, Rousseau tried to convey thoughts about pedagogy.

The educational system did not suit the philosopher. Jean-Jacques ' ideas were contradicted by the fact that these traditions were based on ecclesiasticism and not on democracy, which was widespread in Europe at that time. Rousseau insisted on the need to develop natural talents in the child. The natural development of the individual is the main task of education.

According to Jean-Jacques, the views on the education of children should radically change. This is because a person from birth to death is continually discovering new qualities in himself and the world around him. Based on this, it is necessary to build educational programs. A good Christian and a good person are not what the world needs. Rousseau sincerely believed that some are oppressed, and the rest are oppressors.

Pedagogical ideas of Jean-Jacques Rousseau consisted of advice to parents about the need to develop in their child the desire to work, self-respect, a sense of freedom and independence. In any case, you can not indulge or give in to the wishes, even the whims of children. At the same time, it is necessary not to fall for the submission of the child. But most of all, the philosopher was worried about the shift of the responsibility for education to the teenager.

An essential role in the education of a person is played by work, which will instill in the child a sense of duty and responsibility for their actions. Naturally, this will eventually help the baby earn a living. Under labor education, Rousseau meant a mental, moral, and physical improvement of man. The development of the needs and interests of the child should be paramount for parents.

According to Jean-Jacques Rousseau, at each stage of growing up, it is necessary to cultivate something special in the child. Up to two years – it was physical development. From 2 to 12-sensual, from 12 to 15-mental, from 15 to 18 years-moral. Before the father and mother, there is a crucial task-to be patient and persistent. Still, in any case, it is impossible to "break" the child, instilling false values of modern society. Physical exercises and hardening will develop resistance and endurance in the baby and strengthen its health.

In the period of growing up, a teenager needs to learn to use the senses, not books, to learn about the world. Literature is good, but it messes up the fragile minds and someone's vision of the world.

Thus, the child will not develop his mind and will take the words of others as facts. The main ideas of mental education consisted of communication: parents and caregivers create an atmosphere where the child wants to ask questions and get answers. Rousseau considered geography, biology, chemistry, and physics important subjects for development.

The age of 15 means constant emotions, flashes of feelings that cover teenagers from head to toe. In this period, it is vital not to overdo it with moralizing, and try to instill moral values in the child. Society is quite immoral, so you do not need to shift this responsibility to outsiders. At this stage, it is crucial to develop kindness of feelings, judgments, and will. It will be easier to do it away from the big cities with their temptations.

As soon as a young man or girl turns 20 years old, it is necessary to move on to the learning of their public duties. Interestingly, females were allowed to skip this stage. Civic responsibilities were exclusively masculine. In the works of Jean-Jacques Rousseau, his ideal of personality can be traced, and it contradicted the society of the XVIII century.

Rousseau's works made a revolution in the pedagogical world, but the authorities considered it dangerous, threatening the foundations of the social worldview. The treatise Emile, or On Education, was burned, and a decree of arrest was issued against Jean-Jacques. But Rousseau managed to escape to Switzerland. The philosopher's thoughts influenced the pedagogy of the time, despite being unacceptable by the French government.

Because of the lack of money, Jean-Jacques could not marry a noblewoman, so he chose Marie-Thérèse Levasseur to be his wife. The woman worked as a maid in a hotel located on the territory of Paris. Teresa was not intelligent. The girl came from a peasant family. She did receive no education and couldn't even tell the time. In society, Levasseur was vulgar.

Nevertheless, Rousseau lived in marriage until the end of his days. After 20 years of living together with Teresa, the man went to the Church, where they were married. The couple had five children, but the kids were immediately sent to an orphanage. Jean-Jacques attributed this act to a lack of funds. And besides, according to the philosopher, children prevented Rousseau from doing what he loved.

Death overtook Jean-Jacques Rousseau on July 2, 1778, at the residence of Château d'Ermenonville. In 1777 the philosopher was brought here by a friend who noticed the deterioration in the health of Rousseau. For the entertainment of the guest, his friend organized a concert on the island, located in the park. Jean-Jacques, having fallen in love with the place, asked to arrange a grave for him there.

The friend decided to fulfill Rousseau's last request. The official burial place of this public figure was considered to be the Île des Peupliers. Hundreds of admirers annually visited the park for the sake of acquaintance with the Martyr, whom Schiller so vividly described in poems. During the French revolution, the remains of Jean-Jacques Rousseau were transferred to the Panthéon. But twenty years later, there was a crime-two villain's stole the ashes of the philosopher at night and threw them out in the hole filled with lime.