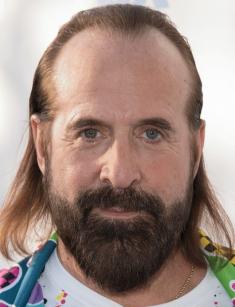 Swedish actor, director, and musician Peter Stormare became famous in Hollywood after playing the role of a maniac in the Coen brothers’ crime drama Fargo, released in 1996. Since then, the actor's filmography has included dozens of films. Stormare has played a wide range of roles, although in Hollywood he has been offered to play mainly negative heroes, and sometimes even abandoned villains. Stormare draws inspiration from music. He plays in a rock band called Blonde from Fargo.

Rolf Peter Ingvar Storm was born on August 27, 1953, in Kumla, Sweden, to Karl Ingvar Storm and Gunhild Storm. At school, Peter changed his surname, adding the ending -are, which in Swedish means "stormer".

There is little information about Peter Stormare’s childhood. It is only known that he grew up in Sweden, in the town of Arbrå. Upon graduation from school, he moved to the capital.

He began his acting career with the Royal Dramatic Theatre, to which he belonged for 11 years.

Peter made his film debut, playing the bit part of a prisoner in the 1978 Swedish crime drama Lyftet. Four years later, the young actor already worked with Ingmar Bergman, master of European theater and cinema. The collaboration with the director lasted 15 years. Peter played a bit part in the Oscar-winning film Fanny and Alexander (1982), then played Hamlet in the play of the same name (1988) and finally portrayed Petrus Landahl in the television movie In the Presence of a Clown (1997) brilliantly.

There were changes in Peter’s career at the beginning of the 1990s. He moved to Tokyo, where he took a leading position as associate artistic director at the Tokyo Globe Theatre, staged classic Shakespeare plays, including Hamlet.

In 1993, the actor moved to New York City, took part in English-language productions, as well as attend auditions, sent photos to agencies. Finally, the Swedish actor was lucky in 1996, when the famous directors, the Coen brothers, cast the Hollywood novice actor in the leading role in the thriller Fargo.

Peter played a silent killer, Gaear Grimsrud, and his brilliant acting was appreciated. The film won about 60 awards, including 2 Academy Awards, and made all the actors involved in the movie famous. A new chapter began in Stormare’s biography. This time it was connected with the abundance of roles.

The next work was the role of Dieter Stark in the top-grossing adventure film The Lost World: Jurassic Park (1997) which featured such stars as Julianne Moore, Jeff Goldblum, Vince Vaughn. The film was a box office success, grossing over $ 618 million and paid rich dividends making Peter even more popular.

In 1998, the Swedish actor appeared in the Coen brothers’ film once again, this time in the movie The Big Lebowski. The role of the German nihilist, Uli Kunkel, became one of the most prominent in this black comedy, which, like all Coen brothers’ films, became cult and won many awards.

This year, Peter filmed a lot. Two top-grossing Hollywood blockbusters, Armageddon and Mercury Rising, with his participation were released. He also played a leading role in the Swedish film Commander Hamilton.

In 2000, five films with the participation of the Swedish actor were released. These were the melodrama Chocolat, the crime drama Circus, the thriller Bruiser, the drama The Million Dollar Hotel. But the most outstanding work of this period was the role in the drama Dancer in the Dark of cult director Lars von Trier. Icelandic singer Björk played the title character in the film. Her heroine Selma kills a person to save her son; thus, the woman is given the death penalty.

Jeff, Stormare’s hero, is the only person who loves her for real. The role of Jeff has become one of the most prominent for the actor and holds a specific place in his filmography.

An exciting and fascinating experience was the collaboration with famous director Steven Spielberg in the fantasy thriller Minority Report (2001). The Swede played Dr. Solomon P. Eddie, who participated in medical experiments on seers, the mutated humans who can foresee crimes.

In 2005, the actor included the role of Lucifer in his filmography. Peter appeared as a tall (the actor is 189 cm tall), gloomy man with a burning look in the mystical thriller Constantine.

Stormare was lucky to work with one more outstanding British director, Terry Gilliam. In 2009, the actor played in his fantasy film The Imaginarium of Doctor Parnassus, portraying the President of the Universe. In 2013, the man worked with the cult director in the movie The Zero Theorem again.

Peter Stormare is also known for his roles on television and appeared as a guest star in the popular sitcoms Seinfeld and Joey. In 2005, he played a member of the Mafia, John Abruzzi, in the first two seasons of the television series Prison Break. He also starred in the project Hawaii Five-0.

In 2017, Peter took part in the TV series American Gods, based on the novel by Neil Gaiman. The actor got the role of Czernobog, one of the negative characters in the series. The same year, he played a cameo role in the sequel to the top-grossing thriller John Wick: Chapter 2.

It should be mentioned that there are video games in the actor’s credentials. In 2008, Stormare played Dr. Gregor Zelinsky, a Soviet scientist and the creator of Time Machine, in a computer game Command & Conquer: Red Alert 3. Peter also inspired a character, The Immortal, in the game Wanted. Weapons of Fate.

There is little information about the actor's personal life. In 1989, he married American actress Karen Sillas. The couple lived together until 2006, then they divorced. There were no children in the family.

Now Peter is happy living with his second wife, a Japanese woman named Toshimi. The couple married in 2008. In 2009 they had a daughter, Kaiya Bella Luna. The actor also has a daughter, Kelly, born in 1989 with a former Swedish girlfriend.

In January 2018, the actor began filming in the comedy series LA to Vegas, but the project was closed in May due to low ratings. However, that year was fruitful.

The celebrity starred in the thriller Beyond the Sky, played the leading roles in the melodrama Age of Summer and the thriller The Assassin's Code. Nowadays, Peter Stormare has a bunch of creative plans, and he is an in-demand actor, as before. In his free time, the man studies music and does spiritual practices. 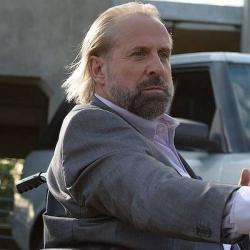