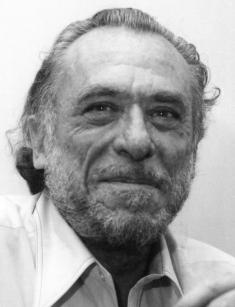 Charles Bukowski, a German-American writer, poet, novelist and master of short stories, was one of the brightest representatives of dirty realism movement, whose made an impact on the social, cultural and economic life of the United States in the 80s of the 20th century. The king of the underground was widely published in print editions and produced more than 60 books, which caused mixed reactions of critics and readers during the author's lifetime and generated heated debates after his death.

Heinrich Karl Bukowski was born in Germany on August 16, 1920; everyone started calling him Charles after his parents Katharina Fett and Heinrich Bukowski moved to the United States soon after their son was born. At first, the family settled in Baltimore, and then moved to Los Angeles, the homeland of ancestors on his father's side. Young Charles spoke English with a strong German accent, and the neighborhood kids made fun of me.

At home, the boy also did not find comfort and support because his father abused the child mentally and physically, beating him up for the slightest misdeed. His mother, who was afraid of drawing his father's wrath, would silently watch her son's sufferings.

Later, talking about his childhood in the documentary Bukowski: Born Into This, Charles concluded that abuse helped him understand the nature of pain and pushed him to start his creative life. Besides, depression which was replaced by rage gave the writer a voice and material for future works.

The boy found distraction in reading, which became his favorite pastime for life. The teenager attended Los Angeles high school and spent his free time in the local library. After graduating from high school, he entered the Los Angeles City College, where he attended courses in literature, journalism, and art.

At the beginning of World War II, Charles dropped out of college and moved to New York, and then to Philadelphia, where he was arrested by the F.B.I. because of his German origin. The future writer was accused of draft evasion and held 17 days in prison. After that, Charles decided to join the army, but he failed a psychological examination and was declared unfit for military service.

Dreams of the career as a writer first came to Bukowski's mind in his youth, but the first steps in literature brought the 24-year-old author disappointment. After the failure of several debut stories, Charles lost faith in his talent, gave up the creative field for a decade, and engaged in physical work. During this period, Bukowski was drinking all the time and exhausting his body with lack of proper nutrition.

As a result, in 1955, the young man went to the hospital with a near-fatal bleeding ulcer. After leaving the hospital, Charles did not give up the bad habit but took up writing again. He published some poems in a small poetry magazine and then started working with Nomad, which published one of the most widely known essays of Bukowski, Manifesto: A Call for Our Own Critics.

In the early 1960s, Bukowski lived in Los Angeles and worked at the post office. At this time, Hearse Press, which published a couple of Bukowski's short stories, got interested in the works of the writer. Then Charles's poems appeared in the literary magazine the Outsider. Beginning in 1967, Bukowski wrote the column in the newspaper Open City, the notes from which became the basis of the short story chapbook Notes of a Dirty Old Man.

In 1969 he accepted an offer from Black Sparrow Press and quit his job to devote himself entirely to the creative field. Less than a month later, he published his first novel, Post Office. The book became popular in Europe and, being translated into dozens of languages, brought the author worldwide fame.

Editors of large companies threw offers at him, but the writer remained faithful to small publishers. He published three chapbooks of poems and two short story collections. Tales of Ordinary Madness and The Most Beautiful Woman in Town contained stories from the writer's life, that strengthened Charles's success and prepared the reader for the release of his second novel, Factotum.

The writer finally formed his style of narration, characterized by a frank description of the characters' lives. This style was equally characteristic of both prose and poetry, and became popular among the readers who were thirsty for "dirty details."

For this reason, the public enthusiastically received the collection of poems titled Me and Your Sometimes Love Poems and his next novel Women. Thanks to these works Bukowski began to be sold well and became motivated to continue writing.

In the late 1970s-early 1980s, Charles published five books of poetry and one anthology You Get So Alone at Times That is Just Makes Sense, and in 1982 Black Sparrow Press published his most "ugly" autobiographical novel, Ham on Rye. In this novel, Bukowski turned to his childhood alter ego Henry Chinaski and described his father's abuse and his mother's indifference, which were a reality in the early life of the author.

Charles returned to the topic of drinking and perversity in his book Hot Water Music, where ordinary stories were filled with extraordinary tenderness and frankness; and then he wrote a few more chapbooks of poems.

In 1989 Bukowski described the way the movie Barfly was created in his novel Hollywood, where famous actors, directors, and screenwriters became the prototypes of the main characters. The author truthfully and in detail described behind-the-scenes life of filmmakers, revealing the uncomfortable secrets of life and nature of stars.

The novel Pulp, published in 1994, after Bukowski's death, became the last complete work of the writer. This detective book was different from all the previous Charles's works because it didn't have any references to his biography, but it kept the irony and openness, and also vivid and memorable tempers of the characters.

In his youth, Bukowski led a loose and disorderly life. Uncontrolled drinking led the future writer to marriage with an alcoholic named Jane Cooney Baker. The couple lived together for a short time, but their relationship could not be called bad, later the writer repeatedly painted the image of his first wife on the pages of his books.

In 1955, Jane disappeared from the author's life, and Charles officially tied his life with a Texas poet Barbara Frye, but their love did not last very long. After the divorce, Barbara went to India, where she soon died under mysterious circumstances. The next girlfriend of Charles was Frances Smith, who did not become the writer's wife but gave birth to his daughter Marina Louise.

In the late 1960s, Bukowski was swapping women like he changed socks. For several years he was in a relationship with Linda King, their turbulent life was filled with constant quarrels which sometimes ended in a fight. At the same time as he was seeing her, Charles fooled around with many other women, which greatly hurt his girlfriend's feelings, and eventually, she left the writer and moved to another city, away from the traitor and liar.

It was with Linda King that Bukowski began to write the novel Women, revealing the intimate details of his personal life. Other characters of the book were Louise Williams, a recording Studio employee who suffered from mental disorder, ugly and married Amber O'Neil, who dreamed of taking revenge on her lover for the bad things he had done to her, "ginger whore" Pamela Miller Wood, who lived nearby, and a poet Joanna Bull, who shared the writer's addictions.

For unknown reasons, there was no mention of Linda Lee Beighle, a health food restaurant owner, who became the third and the last wife of Bukowski. Charles met her in 1976 during live readings and maintained pre-marital relations with his future wife.

In 1988 Bukowski was diagnosed with leukemia, which caused his death on March 9, 1994. Since Charles was a confirmed atheist, the funeral rite was conducted by Buddhist monks. The last few days the master of dirty realism spent in bed in his house near San Diego, taken care of by his spouse Linda Lee Beighle.

The funeral ceremony was held at Green Hills Memorial Park in Rancho Palos Verdes, California. A silhouette of a boxer is displayed on Bukowski's gravestone, which reads the first line of his poem "Don't Try."

After you've read a certain amount of decent literature, there just isn't any more. We have to write it ourselves.

I don't expect everyone to be a genius, but I would never think that so many people would jump into idiocy with such self-confidence.

Of course, it's possible to love a human being if you don't know them too well. 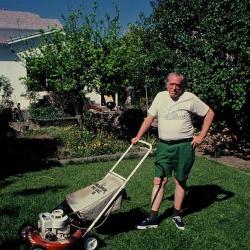