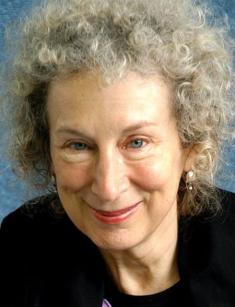 The Canadian writer Margaret Atwood is known by her books The Edible Woman, The Handmaid's Tale, Oryx and Crake, The Blind Assassin and some others. She is also a literary critic and a poet.

Margaret was born in autumn of 1939 in the Canadian capital - Ottawa. The girl's father was an entomologist and worked in the research field, and this was the reason for the family's constant change of the place of living. The family lived for a while in northern Quebec and traveled back and forth between Ottawa, Sault Ste. Marie, and Toronto. Since childhood, Margaret devoted a lot of her time to reading books; she was especially fascinated by stories about animals, colorful comics and fairy tales of the Grimm brothers.

Her childhood was spent in traveling, and that's why Atwood went to school in Toronto only at the age of 8 and graduated in 1957. To study writing, she remained in the city; the girl graduated from the university with the Bachelor of Arts in English, French, and philosophy. The knowledge of foreign languages later helped her a lot in writing.

At the age of 6, Margaret shared her poems with her parents for the first time. And in 16, she entirely decided that she wanted to write professionally and sell her works. The first time her poems were published in the literary journal Acta Victoriana occurred during her study at the university. The readers appreciated the girl's efforts, and that became a starting point for her future career.

The first full book in Margaret Atwood's writing career was published in 1961. Her debut poetry pamphlet Double Persephone brought the girl the E.J.Pratt Medal. Such success helped her easily enter Radcliffe College of Harvard University, where she obtained a master's degree, and the next few years she worked on a dissertation entitled "The English Metaphysical Romance."

Then in different years of her career, she engaged in teaching. She taught students at York University and the University of Alabama, worked in one of the universities of British Columbia.

The second Atwood's book brought the writer even greater success. The collection of poems named The Circle Game which saw the light of day in 1966 was very well received by the public and even won the Governor General's Award. The woman presented her first novel to the public in 1969. It was a witty satire called Edible Woman, which tells the story of a girl named Mary.

Then she publishes several books, including Lady Oracle, Life before Man, Surfacing, etc. However, Margaret doesn't only write novels; her bibliography includes scientific research, as well as her collections of short stories.

In the 1970s, Atwood worked in magazines as an editor and political cartoonist; she made a significant contribution to Canadian literature. And in 1972 she even conducted and published a study entitled Survival: A Thematic Guide to Canadian Literature. As a member of Amnesty International and, since 1980, chair of the Writers' Union of Canada, the author was actively involved in the fight against the totalitarian regime and censorship.

In 1971 the author published a book of poetry Power Politics, which reflected her feminist views. She continued to develop this topic in the book You Are Happy, published in 1974. There she simply interpreted Homer's Odyssey and wrote on behalf of Circe, presenting mythological images from the feminist point of view.

The novel Lady Oracle was published in 1976. It tells the story of a girl who faked her death and then ran away from her homeland to the other side of the ocean where she remembered her previous life. In 1983 the writer published Bluebeard's Egg, which reveals the misogyny of fairy-tale images. In the book Interlunar, which came out in 1984, Margaret covered the issue of gender-based violence.

The writer's book The Handmaid's Tale, known in many countries of the world, came out in 1985 and made a huge success among Atwood's fans and literary critics. And it also won the Arthur C. Clarke Award. and Governor General's Award. In 1990, the film adaptation of the book came out, ten years later - the opera, based on the novel, and in 2016, the tv series. Margaret could not even dream of greater success.

Other books of the author also became the winners of numerous awards and prizes. Atwood more than once received the Governor General's Award, the Giller Prize and the Hammett Prize, and her works were nominated for the Orange Prize for Fiction and were shortlisted for the Booker Prize and the James Tiptree, Jr. Award.

In 1996, the novel Alias Grace was published, the book was received well, the author was awarded the Giller Prize for it, and in 2017 the book-based tv series started airing. In 2000 Atwood published the novel The Blind Assassin, which was nominated for three awards at once.

Then, in the period from 2003 to 2013, the writer published the MaddAddam Trilogy, which included three novels. In 2006, the author presented a short-fiction collection entitled Moral Disorder, and during 2012 and 2013 released The Heart Goes Last novel in parts.

In 2015, Atwood participated in one of the projects of the artist Katie Paterson. The woman became the first author to contribute her manuscript titled Scribbler Moon to Future Library. According to the artist's plan, all the writings held in trust will be unread until the year 2114.

At the age of 29, Margaret started a relationship with Jim Polk, and in 1968 he became the author's husband. However, their marriage only lasted five years, and in 1973 they got divorced.

After some time, Atwood tried to build a relationship with the novelist Graeme Gibson. Together they moved to a farm near Alliston, Ontario. By that time, the couple had two children - Gibson's sons from the previous marriage.

Sometime later, in 1976, the woman gave birth to their daughter, who they named Eleanor. In 1980, the whole family returned to Toronto.

At the moment, the writer doesn't reveal the details of her personal life, bit according to some sources; she broke up with Graeme Gibson. Whether she is in a relationship now remains a mystery.

In November 2018 it was revealed that the writer would publish a second part of the acclaimed novel The Handmaid's Tale. The woman has already started to write it, so she assures her readers with confidence that the book will appear on bookshelves in the autumn of 2019.

Despite the author's advanced age, she feels great and does not have any health problems. In photos, the woman always smiles and looks quite happy. 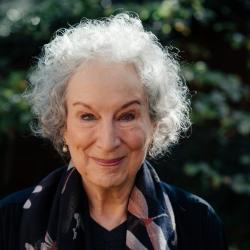