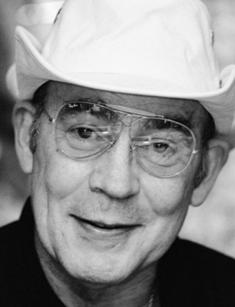 Hunter Thompson is a founder of gonzo journalism movement, the author of the American cult novel "Fear and Loathing in Las Vegas." During his long life of 67 years, the writer used all kinds of drugs but didn't lose the sobriety of his mind. Despite his sins, in the journalistic materials, Thompson stigmatized all who deserved that and justified the innocent, for example, the motor-gang Hell's Angels which was accused of the trade of the forbidden substances, murders and racket.

Hunter Stockton Thompson who was born on the 18th of July, 1937 in Louisville, in the State of Kentucky. He was the first of three sons of Virginia Ray Davison and Jack Robert Thompson. His mother was working as a librarian, and his father, the veteran of World War I, – was a specialist in the state insurance. They called their firstborn in honor of the grandmother and the grandfather on his mother’s line – Prestly Stockton Ray and Lucille Hunter.

In 1952 when Hunter turned fourteen, his father died. It was hard for his mother to provide children on her own, that's Virginia tried to find consolation drinking alcohol. During his school days, Thompson was interested in the sport and literature and was a member of the Athenaeum Literary Association. As a rule, the members of this magazine were representatives of wealthy families of Louisville including Porter Bibb, the first editor of Rolling Stone magazine.

In 1955 the editorial office of Athenaeum excluded Thompson from its ranks. This happened because of his problems with the law: the guy appeared to be in the car with the person who had robbed the shop. He was sentenced to 60 days of imprisonment as criminal's accomplice. He was arrested at the time of his final examinations, and the director of the school didn't let Hunter pass the tests out of school. The future writer didn't receive the education.

A week after Thompson had been released, he was enlisted in the United States Air Force. During his service on Eglin Air Force Base in the State of Florida, the young man as the sports correspondent of The Command Courier newspaper released his first professional material. Since then he wrote many articles on the sports topics. However, he wrote his articles under the pseudonym – the soldiers were forbidden to reveal their names.

Thompson was dismissed from the U.S. Air Force in November of 1957 with the qualification of the first class airman.

In his youth, Thompson was a troublemaking man. He was fired from Time magazine for disobedience, from The Middletown Daily Record newspaper – because Hunter had quarreled with the owner of the local restaurant who turned out to be the advertiser of the edition. When he found himself in Big Sur, in the State of California, he published a critical review of the settlement for this he was banished from the city.

Hunter Thompson wrote "Prince Jellyfish" during this unfortunate period of his biography. This debut work hasn’t been published yet. The Guardian edition claims that this literary work is

"an autobiographical novel about the boy from Louisville who goes to the big city and struggles against the screw-heads for the minute of fame."

During the sixties, when Thompson was staying in Puerto Rico, he wrote his work "The Rum Diary." In the novel, he tells about the journalist called Paul Kemp who moves from New York to San Juan to work in The Daily News newspaper. "The Rum Diary" wouldn’t have been published if once Johnny Depp, who was a close friend of Thompson, hadn’t found the manuscript among a number of his other works. The novel was published in 1998. After the death of the writer, in 2011 the actor performed the major role in the screen adaptation of the novel.

In 1965 Carey McWilliams, who was the editor of The Nation magazine, employed Thompson to write a story about the world's largest motor club Hell’s Angels. After the article had been released the journalist received the invitation from the bikers to set off on travel with them. After a year of the wanderings, the book " Hell's Angels: The Strange and Terrible Saga of the Outlaw Motorcycle Gangs" (1966) was published. According to the members of the club, "it is the only truthful work," ever written about them.

The success of the novel allowed Thompson to appear in The New York Times Magazine, Esquire and Harper’s editions without any special efforts. And certainly, he became a famous American writer. He became so popular that in 1968 he was offered to sign Military tax protest of writers and editors which assumed refusal to pay taxes protesting the war in Vietnam.

Thompson was planning to tell about the times of "the death of the American dream," about the degeneration of vital ideas of American people both in material, and spiritual sense. Later, he embodied this idea in his most famous novel under the title "Fear and Loathing in Las Vegas."

In 1970 there was published Thompson’s article under the title "The Kentucky Derby Is Decadent and Depraved" in Scanlan's Monthly edition. Though this material was ordered for the sports magazine, there was little attention given to the horse racing in it. The journalist concentrated on the description of the audience. In the process of the narration people began to resemble the animals more and more:

This article is considered to be the first text written in gonzo style (in English gonzo – "cranky," "mad"). Gonzo is a journalism movement for which it's characteristic the subjectivity, the narration from the first person because the reporter isn't a viewer, but the participant of the events. Sarcasm, use of quotes, hyperboles, offensive language are permissible in this genre. Almost all Hunter Thompson’s works are written in this style.

For the first time, Hunter used the word "gonzo" in his novel "Fear and Loathing in Las Vegas: A Savage Journey to the Heart of the American Dream" (1972). The history of this novel was created during the trip of Thompson and the lawyer Oscar Zeta Acosta to Las Vegas to receive the information about the murder of the journalist of Los Angeles Times.

The novel is written from the first person by the journalist called Raoul Duke. Together with the lawyer Dr. Gonzo he goes to Las Vegas to write about the race "Mint 400". In search of the American dream, they use drugs and alcohol from which their luggage carrier is full. Under the effect of the drugs, the characters begin to have hallucinations, are delirious and even commit crimes.

The gonzo-novel became the standard of the American literature of 1970-s. The plot of this novel became the basis for the movie Fear and Loathing in Las Vegas with Johnny Depp and Benicio Del Toro in the major roles. Depp was living together with Thompson during several months to take over his habits. During this time the men became good friends. The movie, as well as the movie, became cult.

Since the end of 1970-s, Thompson published his journalistic materials written till the period of gonzo journalism and the articles from Rolling Stone magazine. There were four volumes which entered the cycle under the heading "The Gonzo Papers": "The Great Shark Hunt: Strange Tales from a Strange Time" (1991), "Generation of Swine" (1984), "Songs of the Doomed" (1990) and "Better than Sex" (1995).

The collection "Kingdom of Fear" (2003) became one of the final books written by Hunter Thompson, the main topic which is the revolt against the authorities. Most stories of this book are connected with the consequences of the terrorist attacks on the 11th of September of 2001. "Kingdom of Fear" is considered to be the writer's memoirs.

On the 19th of May, 1963 Hunter Thompson married his old girlfriend, Sandra Dawn Conklin. The lovers repeatedly tried to have children, however, three pregnancies resulted in the abortions, and two newborns died in their infancy. Their only son Juan Fitzgerald Thompson was born on the 23rd of March of 1964.

In 1980 Hunter and Sandra divorced, but they always stayed close friends.

On the 23rd of April, 2003 the writer got married to his assistant called Anita Bejmuk. Their personal life was happy till the writer’s death.

On the 20th of February, 2005 Hunter Thompson died from the gunshot wound in the head. The tragedy happened in Woody Creek in the State of Colorado. The writer was talking to his wife Anita by the phone when he was picking the revolver back up.

Thompson’s son Juan together with his spouse Jennifer who were staying at Hunter at that time took the shot for the sound of the fallen book. Later Juan found the dead body of his father. In the memory of his father, he shot at the sky from the gun three times. In the writer’s there was a sheet of paper with the date "22nd of February, 2005" and the only word written on it was – "counselor." Later in Rolling Stone edition there was published the allegedly posthumous Thompson's note under the heading "The Football Season Is Over":

Thompson's surroundings reported to the press that during the latest time the man was in depression because of the old age and health problems. In his will, the writer specified the way how he should be buried. He wanted to be cremated, and his ashes were to be launched into the sky from the pistol which had to be on the 45-meter pedestal in the yard of his house.

Johnny Depp decided to uphold the last will of the writer. According to his order there was built the 50-meter pistol, judging by the photo it was performed in the form of the gonzo symbol - the six-fingered fist clutching the peyot flower. The pistol shot on the 20th of August, 2005.

"You can't miss what you never had."

"Nowadays being happy will be the most revolutionary act."

"If I'd written all the truth I knew for the past ten years, about 600 people - including me - would be rotting in prison cells from Rio to Seattle today. Absolute truth is a very rare and dangerous commodity in the context of professional journalism".

"In a closed society where everybody's guilty, the only crime is getting caught. In a world of thieves, the only final sin is stupidity. ". 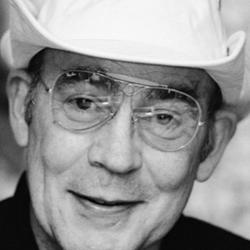