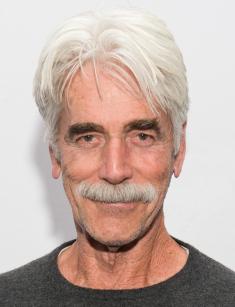 This Hollywood actor has become popular due to his roles in the westerns and fighters, and the cowboy's hat has become the characteristic attribute of his movie images. After the actor Sam Elliott had brightly debuted in the most high-grossing western in the history of Hollywood under the title Butch Cassidy and the Sundance Kid, he began to receive invitations to take part in the movies of the same genre, for example, The Quick and the Dead, Gone to Texas and Tombstone.

In the late nineties, the actor appeared in the cult black comedy The Big Lebowski, having proved the versatility of the talent with his role. And twenty years later he surprised and pleased the admirers with the nomination on the most prestigious Academic movie awards for the part in the picture A Star Is Born.

Samuel Pack Elliott was born on the 9th of August, 1944 in Sacramento, the State of California. The father Henry Nelson Elliott is an expert in the Security service of the wild nature at the U.S. Department of Interior. Sam’ mother Glynn Mamie Sparks is a Physical Education teacher. Both parents of Sam are from Texas. Later, the journalists will see a symbolical connection with his cowboy's roles in this fact of the actor’s biography.

When Sam turned thirteen, his family moved from California to Portland to the State of Oregon. Here, Elliott spent his youth. After he had graduated from David Douglas High School in 1962, he entered the University of Oregon and chose the specialty of English and Psychology. However, having studied here for two semesters, the guy got bored. Elliott left the university and chose other institution – Clark College in Vancouver, in the State of Washington.

Being a student, he performed his first role in the picture Guys and Dolls. The critics have highly appreciated the acting of non-professional actor and Sam, working on the movie set, felt himself in his elements. So, after the completion of the studies at the college, he announced to his parents that he wanted to become a professional actor.

The father didn’t understand the choice of her son and till the last moment was trying to dissuade Sam from his decision but in vain.

"My father was a realist and an improbable hard worker. I’ve adopted this trait from him, and I am grateful to him for it", - the actor admits in his interview.

Henry Elliott died unexpectedly; he had had a heart attack. After his death, Sam set off to Los Angeles. The guy was studying acting skills at the courses, and at the same time, he was working at the construction to pay for his living, housing, and food. When the army time has come, he was on the military service in the 163rd aviation group of the National Guard of California.

The actor began his career in Hollywood during the epoch of the western genre. The actor Sam Elliott ideally fit the dramatic art of these movies: a tall (his height is 188 cm), thin, with a thick curly hair, he perfectly rode horses and looked great in the shot.

The role in George Roy Hill's picture Butch Cassidy and the Sundance Kid (1969) with Paul Newman and Robert Redford in main roles has become his lucky ticket. Elliott received the anonymous role of one of the card players in the saloon. But in a year h already managed to break through in the very popular TV project Mission: Impossible. The actor managed to receive the role and to perform in the season as Dr. Douglas Robert in the series about secret government agents of the USA.

The actor had to expect for his main role during three years: in 1972 Elliott performed the role of the young journalist in the horror movie under the title Frogs. His character is working on the report on the wild nature and faces some strange beings. The movie didn’t bring great success to the actor, though he didn’t have time to be worried about this. Sam was actively working on TV, passing from one movie set to another, from one episode to another. In the seventies, the actor appeared in such projects as Gunsmoke, Mannix, Hawaii Five-0, The Streets of San Francisco and others.

The actor had his first great success in 1976. The mini-series Once an Eagle started on the small screen. This is a story about two officers of the First World War. One of them, Sam Damon (Elliott) – is an example of courage, honor and army valor, while another one, Courtney Massengale (Cliff Potts) – the complete antagonist, the deceiver, and intruder using family relations fighting for his own purposes.

The same year there was released the feature movie Lifeguard in which Elliott again performed in the leading role. His character, the 32-year-old rescuer Rick Carlson, is disappointed in his profession and life after the meeting with his childhood friends, but his school love saves him from the depression. It is one of the few melodramatic movies in the filmography of the Californian actor.

Despite the handsome appearance of the actor, he consciously refused the role of the hero lover and said the following words:

In the eighties, the critics distinguish the role in the drama Mask (1985) among other works of Elliott. This is a story about the boy Rocky Dennis who suffers from the rare bone disease which disfigured his face. But Rocky is looking positively at the world; he likes his mother very much – his groovy biker Rusty (Cher), and thinks that his father is a handsome biker Gar (Elliott).

In 1986 he performed in the television movie Gone to Texas based on the biography of the politician and leader of the Texas revolution called Sam Houston. Elliott embodied the character of the active Texan true patriot and the fighter for freedom of the native land. The star of the westerns performed one more bright and expressive biographic role in the military movie Gettysburg (1993) about the events of the Civil War in the USA. He embodied the character of Gettysburg’s battle, Brigadier General John Buford.

The same year the actor please his fans with the great western under the title Tombstone. The old fellow Sam played the role of the sheriff Virgil Earp who tries to adjust his post-war life in Tombstone. Though, after the opening of the silver mine in this town there begin to appear more and more prospectors and bandits.

In 1998 the actor received a great role in the arthouse cinematography. The leading intellectuals of Hollywood - Coen brothers invited him to perform a role of the Stranger the narrator in the black comedy The Big Lebowski. Sam's character, actually, also narrates the story of the "dude" Lebowski. This role brought a new wave of fame and the more fans to the actor.

Five years later Elliott began to have in his filmography the first superheroic fighter Hulk (2003) directed by Ang Lee. The master performed the role of General Ross – the antagonist of the leading character. It's funny that in the comics version Ross is drawn with the brand mustache of Elliott.

Once again the actor appeared in the fantasy genre in 2007, when he embodied the character Texas balloonist Lee Scoresby in the movie The Golden Compass together with Nicole Kidman, Christopher Lee and Daniel Craig and also the Ghost Rifer Carter Slade in the fighter Ghost Rider. Both pictures have become the leaders of the hire.

In 2009 Elliott played the role of the major pilot of the American Airlines - Maynard Finch in the drama Up in the Air featuring George Clooney. For this role, the actor received COFCA Award for the best acting ensemble. The master of transformations received his new awards in 2015. It was the Critics' Choice Television Award for the role in the series Justified. At the same time, the actor was working in the series Parks and Recreation.

And, at last, the chance to receive the highest award in cinematography appeared on the horizon of the actor after the participation in the most sensational movie project of 2018 A Star is Born. This movie is a director's debut of Bradley Cooper. This movie tells a story about the singer Ally, who goes through a difficult path in her life, she gains glory but loses her husband, who has made a star of her.

The singer Lady Gaga played the role of Ally and Bradley Cooper performed the role of her husband Jackson and Sam Elliott embodied the role of his brother Bobby. The premiere of the movie was held in August of 2018 after which the actors were posing for the photos and told about the process of the shootings.

With his only spouse, the actress Katharine Ross, the actor met in early youth, at the beginning of his career. Actually, she was a star of the movie Butch Cassidy and the Sundance Kid and performed the role of Kid’s beloved woman – charming Etta Place.

At that time Sam couldn’t approach the celebrity and was embarrassed to talk to her, but after some years when the actor already became famous in Hollywood, Ross and Elliott appeared on the same movie set of the horror movie The Legacy (1978).

During that time the actors began to be closer. And in 1984 they officially registered their relationship. The same year their only daughter Cleo Rose Elliott was born. She also chose the musical career.

The actor admits that he doesn't like social networks and isn't registered in any of them, even in the mega-popular Instagram. The actor doesn’t like to present his personal life to the public. The couple lives solitude on the ranch in Malibu and has a big household.

Together with all the movie fans Sam Elliott and other actors and creators of the movie A Star is Born to expect the 91st ceremony of Academic Awards which is set for 24th of February, 2019 in Los Angeles.

The movie A Star is Born is nominated for eight awards at the same time including the nomination for Best Supporting Actor for Sam Elliott. 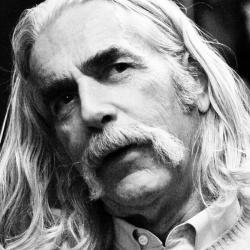