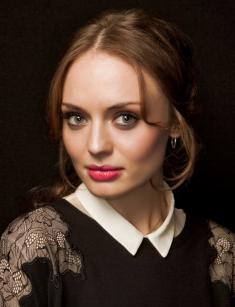 Laura Haddock is an English actress, who gained her popularity thanks to the television series Da Vinci's Demons, Upstairs Downstairs and How Not to Live Your Life. But we cannot say that Haddock is the only a serial actress. Laura stares in full-length films and performs on the stage of London theaters.

Laura was born and spent the first years of her life in London, in a prestigious area of Enfield, considered the entertainment center of the capital. When the girl grew up and it was time to send her for secondary education, parents thought that the closed school for girls is the best option of raising a child in the modern world. They enrolled Laura at St George's School, which was located in East England, in Harpenden, Hertfordshire.

She spent all her conscious childhood and youth there. She came home to her parents only in the summer and for the Christmas holidays, she should study at school for the rest of the year until graduation. But at the age of 17, Laura quits her studies and goes to learn acting at Arts Educational School in Chiswick a year before receiving a certificate of maturity.

This course helped the girl to get not only to the theater stage, where she participated in several productions successfully, including a very popular play Rutherford & Son but began to appear in movies and on television too.

Laura Haddock made her debut on television in one of the series of the situational comedy My Family in 2007 and managed to participate in the creation of the fairy-tale film Color of Magic, a two-part television film, the adaptation of the world-famous books Color of Magic and The Light Fantastic of the British writer Terry Pratchett.

Then there was a superhero film Captain America: The First Avenger and the detective A Pocket Full of Rye from the series of films about the restless old lady detective Miss Marple.

There was the exciting role of Laura in the British television sitcom Honest. However, the girl had to appear naked in some scenes and her family was against such behavior. The actress found a way out: she was shot in a tight body-colored tight in front of the cameras. Anyway, Laura decided to play it safe, so she took her parents to a restaurant or a theater when the series was on.

A year later, the actress played the main role in the series Monday Monday this time. Laura Haddock played the role of a girl with the Russian name Natasha.

Also, the actress can be seen in the youth comedy The Inbetweeners Movie, a fantastic thriller Storage 24.

Laura Haddock dreamed of getting the role in a Hollywood movie for a long time. But she did not manage to do it: not too high-budget horror film Rage of the Yeti received terrible criticism.

But the superhero movie Guardians of the Galaxy, in which Laura Haddock played a minor role, had success with the audience. The actress played the role of the mother of the protagonist of this fantastic movie, Star-Lord Peter Quill (Chris Pratt) - Meredith Quill.

The heroine of the actress appeared only in flashbacks, as the action in the past of Peter takes place after the death of his mother, the hero is kidnapped by aliens. But the main plot of the movie takes place 26 years after that.

The actress appeared in the American-British fantasy television series Da Vinci's Demons and the filming of the comic blockbuster at the same time. The series was the result of a collaboration between the famous TV companies Starz and BBC.

The movie is about the life of the famous Italian inventor and artist Leonardo da Vinci but there is not a lot of information about the official biography of the scientist in the plot of the series, based on fictional "secret" and "untold" side of his life and there are some elements of mysticism and fantasy in the story.

However, the plot is focused on the people who lived at that time: Pope Sixtus IV (James Faulkner), the nephew of Pope - Count Girolamo Riario(Blake Ritson), ruler of the Florentine Republic Lorenzo Medici (Elliot Cowan), his wife Clarice Orsini (Lara Pulver) and others.

Laura Haddock played Lucrezia Donati, the lover and muse of Lorenzo Medici. The actress received a significant role and appeared in 26 episodes out of 28. There was the main character Tom Riley, who played Leonardo da Vinci, who played in all 28 series.

The series received positive reviews from both critics and viewers, like the series, Da Vinci's Demons won Primetime Emmy Awards twice, which eventually led to the fact that the series was extended first for the second and then for the third season.

Laura Haddock met with a British actor, singer and composer Richard Fleeshman for a few years. After the parting with him in 2011, she met another compatriot, actor Sam Claflin, the star of the series The Hunger Games and the melodrama Me Before You.

The young people decided to hold a quiet and modest wedding ceremony, which took place on July 30, 2013, after two years of dating and romantic evenings. And Laura gave birth to her son in two and a half years, whose name she and her husband decided not to disclose for the first time. Subsequently, journalists found out the name of the child. The actors called their son Pip Claflin.

The interesting fact, the family hid the birth of a child for a long time, so many media in their news attributed to the boy a very different date of his birth a month and a half later.

In early January 2018, the actor's family was replenished. Laura Haddock had a daughter. The couple adhered to complete secrecy as in the case of the first-born, so the press and fans know neither the girl's name nor the exact date of her birth.

In 2017, Laura Haddock returned to the role of Meredith Quill in the sequel of the sci-fi action comic Guardians of the Galaxy Vol. 2. The film is dedicated to the search for the main character of his father, who is an alien. Therefore, the role of Laura Haddock in this film is more and more detailed than in the first. Laura Haddock had an estimated net worth of $5 million in 2017.

It happens because of the memories and stories, found by his father, which show scenes of dating and relationships with the dugout. Besides, the film reveals the mystery of the disease and the early death of this heroine, as well as the abduction of her son by space criminals.

Also, the actress works on another part of another teen movie Transformers: The Last Knight. The film begins with the famous characters from British legends, Merlin, who signs a contract with twelve transformers. Merlin promises to protect the secrecy of the stay of the transformers on the Earth in return for help in the war.

The heroine of the actress was a part of the main characters of the film. Laura Haddock played the role of the Oxford professor Viviane Wembly, who is also a direct heir to Merlin and the only person who can control the mystical staff of Quintessa and save the Earth from certain death.

Today, the actress starred in a more serious film, the British drama The Laureate. The film tells the story of a love triangle, in which the famous British poet and literary critic Robert Graves, the aristocrat-wife of the poet Nancy Nicholson and the fellow poet Laura Riding are involved. Dianna Agron, Tom Hughes together with Haddock played the main roles in the film.

The premiere date of the film has not yet been appointed. The film will be released in 2018, the official Russian adaptation of the name has not been held.