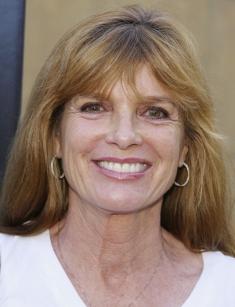 The American actress Katharine Ross has appeared in dozens of movies. She played her best parts in The Graduate, Butch Cassidy and the Sundance Kid, and Voyage of the Damned.

The future actress was born in Los Angeles, California, in 1940. Her father, Dudley Ross, served in the Navy when his daughter was born. Soon, the family moved to a suburban area of San Francisco.

In 1957, Ross graduated from the local school and entered Santa Rosa Junior College. As a student, Katharine began to study acting and played the debuting role; her course mates also participated in that project.

Apart from drama, the young woman was fond of riding and even did the sport for a while. The American rodeo rider Casey Tibbs was her friend.

In 1964, Ross participated in the series Gunsmoke that did not bring her much fame. Further on, the artist got many secondary roles in Wagon Train, Run for Your Life, and Arrest and Trial.

1967 brought the first significant role in Mike Nichols’s melodrama The Graduate with Dustin Hoffman, Anne Bancroft, and William Daniels. The audience appreciated the story about a young man, Benjamin Braddock, who graduated from a college and came back to his parents’ house to face endless meetings with friends. As the celebration is going on, Benjamin gets acquainted with the family friend, an elegant middle-aged lady. The woman falls in love with him and starts chasing him. The young man feels helpless and has nothing to do but to have sex with her. As soon as Benjamin’s mother learns about it, she turns into “a revengeful witch”, and the whole story is getting new colors.

The project grossed $100 million worldwide. Critics appreciated Katharine’s Elaine Robinson; in 1968, she was nominated for the Academy Award for Best Supporting Actress and awarded the Golden Globe for New Star of the Year.

The actress began to receive more offers, and directors were glad to collaborate with her; Katharine’s filmography expanded with new successful projects: Tom Gries’s Fools, the drama Chance and Violence, and the adventure action movie Hellfighters.

In 1969, Ross joined the cast of George Roy Hill’s western Butch Cassidy and the Sundance Kid starring Paul Newman and Robert Redford. In 1971, she won BAFTA Award for Best Actress for this work.

Butch Cassidy and the Sundance Kid is the story about two friends known as the leaders of the Hole in the Wall Gang. Sundance is a top shooter who can perfectly run errands; Butch is the brain of the gang. As the men rob a train carrying cash, the experienced police officer starts chasing them. No criminal has ever escaped from him. The robbers find shelter in the house of Sundance’s friend, Etta Place (Katharine Ross). Butch realizes that nothing more can be done in that town and wants to go to Bolivia.

In 1975, Katharine had the lead role in The Stepford Wives by Bryan Forbes. This horror pictures a young woman, Joanna Eberhart, who wants to move from noisy Manhattan to peaceful Stepford with her husband. Nothing seemed to bring trouble. However, all women in the neighborhood are suspicious and strange: each of them looks like a perfect housewife and loyal partner, and their talks are pretty stupid. The more time Joanna spends there, the more she believes that some devilry is going on.

The project brought the actress Saturn Award for Best Actress.

Further on, the actress received other notable roles: Murder in Texas (1981), Red Headed Stranger (1986), and A Climate for Killing (1991). She tried herself in voicing: fans of Family Guy and American Dad! could enjoy her work in some episodes.

In 2001, the artist played one of the main characters in the fantastic thriller Donnie Darko that grossed more than $1 billion in the United States. In 2006, Ross worked on the movie Eye of the Dolphin and continued to voice various characters.

2017 was marked with another significant project: she personified Val in Brett Haley’s melodrama The Hero.

The artist’s life was full of romances; she has been married five times.

The actress used to be the wife of the famous Hollywood movie-maker Conrad Hall. The young people got acquainted at the movie set of Butch Cassidy and the Sundance Kid. In 1973, they divorced. The actor Gaetano Lisi was the fourth husband in the actress’s life. She had no children with these men.

Nowadays, Ross is married to the actor Sam Elliott. The couple first met in 1969 at the movie set of Butch Cassidy and the Sundance Kid; they did not get on well at that time. In 1978, the actors met again as the movie The Legacy was filmed. In 1984, Sam and Katharine married; four months later, their first and only child, the daughter Cleo Rose Elliott, was born.

Today, Katharine’s relationship with her husband is perfect: they live in their own ranch in California and feel amazing. Perhaps, the aged couple wants to have a rest after so many projects, but fans still hope they will see their favorites on the screen.

Sometimes, the media publish the “Hollywood love story” and describe Sam and Katharine’s meeting and collaboration. Such articles are supported by the couple’s touching, harmonious pictures: Elliott puts his fragile spouse in his arms, and both of them are smiling radiantly.