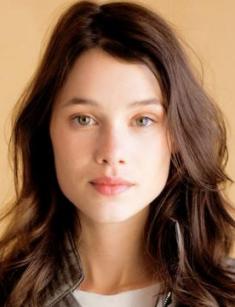 She is a very special mermaid Serena, different from the rest of the creatures of the depths of the seas. The girl has a flair of mystery not only in film roles but also in her personal life. Àstrid Bergès-Frisbey has enormous talent in the world cinema, which was discovered by the creators of the saga about Captain Jack Sparrow.

The biography of the actress with the great original sound of the name Àstrid Bergès-Frisbey started on May 26, 1986. In interviews, the girl often finds it difficult to answer the question about her nationality. Àstrid's father is Catalan, and her mother is half-French and half American.

Besides, the girl was born in Barcelona, Spain. However, the little girl spent her childhood in France, in the South-East of the country, where the future star of the screen used to love going horse riding in the olive fields. That's why the girl often considers France to be her homeland.

The actress's mother worked as a seamstress in fashion houses in Paris. That's where the actress got her impeccable taste from. It is not surprising that for the elegance of outfits and harmonious appearance on the red carpet critics dubbed Àstrid a style icon.

It seemed that the girl decided on her future profession when she was tiny. The schoolgirl was planning to start working as an osteopath. She even applied to medical College and started classes.

The sudden tragedy of her father's death had forced her to reconsider her own life. Grieving the loss of a loved one, the Frenchwoman realized the transience and unpredictability of fate. Wanting to get the most out of life opportunities and planning to carry out a secret dream, the young beauty dropped out of College and enrolled in acting classes at a drama school.

The actress began her debut filming in 2007, playing a role in the television series Sur le fil. Soon after that, the girl got offers from a couple of Spanish and French directors. In spite the fact that she was too short to be a model (she is 5 feet 61 inches tall), slender Àstrid (the girl weighs, according to some reports, around 127 pounds) was noted in promotional projects for such magazines as Vogue and Glamour.

Soon the talented and charismatic Frenchwoman was noticed by the creators of the franchise about the Pirates of the Caribbean. In 2011, Bergès-Frisbey appeared on the screen in the company of Hollywood stars in the movie Pirates of the Caribbean: On Stranger Tides. In an interview, the girl admitted that the invitation to the audition was a pleasant shock, because Àstrid, perfectly fluent in Spanish, Catalan and French, did not speak English.

The actress promised the film's director Rob Marshall to learn the language before filming began and kept her word. However, on the set, she found an assistant in the face of the Spanish star Penélope Cruz. The actress helped the young partner to cope with texts and monologues, and also translated requests of the director.

Bergès-Frisbey was incredibly grateful for the opportunity to work with Johnny Depp, Ian McShane, and already mentioned Penélope Cruz, who, by the way, was Àstrid's idol.

On the screen, the actress appeared in the image of mermaid Serena, mysterious and charming. The girl swims well, which was a help in work. However, she had to hide from the burning sun of Hawaii by any means possible. A creature of the underwater world is not befitting to be tanned.

In the same 2011, when the actress got famous not only at home but also around the world, she received the award of the Cannes film festival in the category Women's Discovery of the Year. After such a breakthrough, Àstrid's filmography began to snowball. The title role followed the Hollywood project in the movie Juliette and the leading role in the Spanish drama El sexo de los ángeles.

In 2014, Bergèr-Frisbey got the part of Sofi in Mike Cahill's science fiction drama I Origins. She played a girl with amazing eyes, the mysterious lover of the main character, performed by Michael Pitt, whose death led to a series of strange events. By the way, the unique eyes are a natural feature of the actress. She suffers from heterochromia, which gives a unique charm to the look. The motion picture was warmly received by the audience and positively evaluated by critics.

The girl' life is a mystery. It is unclear how it is possible to hide details from the press and paparazzi, but it is not known whether the heart of the French beauty is free.

While working on the movie I Origins the public seriously suspected that she was having an affair with a colleague on set, Michael Pitt. The girl hastened to dispel the rumors, saying that the young people were bound only by friendship. Àstrid said the same about the gossip revolving around her and Sam Claflin (her partner on Pirates of the Caribbean).

In 2014, journalists seemed ready to rub their hands in anticipation of the scandal. Àstrid was caught on camera with English actor Charlie Hunnam. The couple was leaving the hotel together. The obvious conclusion was that they were having an affair, even though the man was in a relationship with Morgana McNelis.

However, the scandal never broke out. The parties simply ignored the pictures, not commenting on what had happened. Since the actors did not appear together again, and then it became known about their joint work on a movie, the gossip came to naught.

In an interview, the girl said that, despite the covers of glossy magazines and fashion shows on the red carpet in designer outfits, in everyday life she likes comfortable, casual clothes. The actress especially is not fond of bags. The Frenchwoman prefers to put all the necessary things in her pockets.

Among her hobbies, reading holds a special place. And the actress shared the fact that books in her library were mostly found at or bought from a flea market. According to the bookworm, such publications have a soul of their own.

As for musical preferences, the music lover Àstrid loves everything from rock to the Opera. There is a song for any mood in the playlist of the actress. The celebrity never hesitates in choosing movies for creative inspiration. The actress is a fan of Stanley Kubrick and Leos Carax.

The last work of the actress on the screen was the role of a magician in Guy Ritchie's King Arthur: Legend of the Sword. The motion picture was released in 2017.

Now there is no news about new projects of the Frenchwoman. Some secrecy and neglect of social media fuel the interest of fans of the actress. But for now, the curiosity of viewers and fans of the celebrity remains unsatisfied.