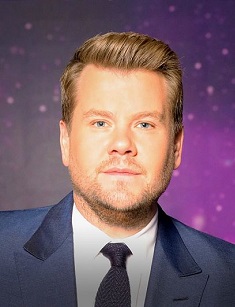 James Corden’s full name is James Kimberley Corden. His date of birth is 22nd of August, 1978. He is a popular British comedian, T.V host and, actor. He is the host of the hit late-night T.V show called “The Late Late Show with James Corden.” The show is run by CBS channel.

Corden and actress Ruth Jones joined hands to create a BBC sitcom called "Gavin and Stacey (2007-2010)." Corden has also co-written and acted in this sitcom. The series was highly praised by the audience. The comedy series won the "BAFTA Television Award” for Best Comedy Performance. He made an appearance in UK No.1 single “Shout” with Dizzee Rascal. This particular song was meant to be an unofficial song of the England football team for the 2010 FIFA World Cup.

In 2015, he sang a duet cover song named "Only You" with Kylie Minogue. During 2011, he took part in the UK charity telethon titled "Comic Relief". On this very telethon, he originated his Carpool Karaoke sketch and drove around London singing songs with George Michael. He co-hosted “BRIT Awards” in 2009 with Minogue and Mathew Horne.

Corden is well-known for his excellent hosting skills and natural charisma. From 2011- 2014 he was a continuous host on “BRIT Awards.” In 2016, he was given the chance to host the “70th Tony Awards”. From 2017-2018, he had the honor to host prestigious the “Grammy Awards.” Since 2010, Corden has been conducting sports-based comedy panel show on Sky One named “A League of Their Own.”

James Corden Broadway experience came from the comedy play “One Man, Two Guvnors.” The play initially ran at National Theatre in the year 2011 then it moved to West End and Later it was transferred to Broadway. Corden performed the lead role in this play, which ultimately was cinecast worldwide via National Theatre Live. This comedy play earned him the “Tony Award” for Best Actor in a Play. He was awarded "BAFTA Britannia Award" in the year 2015 for British Artist of the Year category.

Corden is British by birth. He was born in Hillingdon, Greater London. James Corden dad’s name is Malcolm Corden and his mother’s name is Margaret. His dad was a musician by profession in the Royal Air Force band and his mom was an active social worker. He has two sibling sisters. His growing years were spent in Hazlemere, Buckinghamshire. He went to Holmer Green Upper School and Park Middle School. His brought up was done in Salvation Army church but now he doesn’t consider himself of Christian Ethnicity.

Corden made his acting debut on the London stage at 17 years of age. He became the part of television shows like “Boyz Unlimited” and “Fat Friends.” The show made him recognizable among industry fellows. In 2004, his acting was praised in “The History Boys” which was an Alan Bennett’s play. He is the creator of the famous sitcom “Gavin and Stacey” which went on air in 2007. During 2009, James Corden’s career graph went downwards because of the number of flops. The James Corden show “Horne and Corden” was not able to attract masses either.

Later his film “Lesbian Vampire Killers” also failed miserably at the box office. He managed to bring his career graph upwards with his extraordinary performance on the London and Broadway play "One Man, Two Guvnors." The stage play made him earn both “Olivier” and “Tony” Awards in the year 2012.

Meanwhile, Corden and Mathew Baynton together created a series called "The Wrong Mans." The series and Corden acting skills, both were praised by the audience. James Corden, Meryl Streep, Anna Kendrick, and Emily Blunt starred together in a movie called “Into the Woods.” The musical movie was released in the year 2014.

Corden was officially announced in September 2014 as a replacement host for Craig Ferguson for the popular show “The Late Late Show “. His selection was surprising to him as well, as he told Variety

“When I got the job, I'd never even been on an American talk show."

The show debuted in March 2015 and Tom Hanks was his first guest on the show.

Till now an enormous number of stars has been a part of the show such as Katie Couric, Mariah Carey, and David Beckham, etc. In 2016, Corden hosted the 70th Annual Tony Awards and impressed all with his comic timings. The James Corden Carpool Karaoke guests made his talk show a super hit. He won the “Emmy” Award for his Carpool Karaoke segment.

At the age of 17, Corden got his first acting project on the London stage play. Slowly and steadily he made his way into television shows like “Fat Friends” and “Boyz Unlimited.” His acting skills were critically acclaimed by masses in 2004 for his role on the Alan Bennett play named “The History Boys.” James Corden’s funny side came into notice when he created a well-known British sitcom “Gavin and Stacey." The series went on air in the year 2007.

On the other hand, his act in "One Man, Two Guvnors" earned him two prestigious awards like "Olivier" and "Tony" in the year 2012. During 2014, he made appearances in two movies named "Into the Woods" and "Begin Again." He made his debut as a host in March 2015 on “The Late Late Show” and the audience and viewers were amazed. On the other hand, his Carpool Karaoke program earned him an Emmy in the year 2016.

When he was still a bachelor, Corden lived in an apartment with a friend, Dominic Cooper. After sometime, Cooper introduced Julia Carey to him and they hit it off. They started dating and got engaged on December 25, 2010.

At present, James Corden’s wife Julia and himself along with their children relocated from England to Los Angeles. The couple has a son named “Max” and two daughters called Carey and Charlotte.”

In the year 2019, James Corden’s net worth is estimated to be around $12 million. His salary on “The Late Late Show” as a host alone contributes $5 million to his net worth.