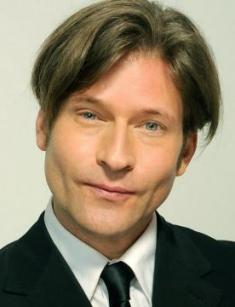 The American actor Crispin Glover has become famous due to the role of George McFly, the father of the traveler Marty McFly from the movie Back to the Future. Once his unusual appearance and natural charisma interested such filmmakers as Oliver Stone, David Lynch, and Tim Burton, and now Glover is mostly a supporting actor.

Crispin Hellion Glover was born in New York on April 20, 1964. He is the only son of actor Bruce Glover and dancer Mary Elizabeth Lillian Betty Krachey (née Bloom Koerber). Both left work after the birth of the boy. Crispin's blood is a mixture of his father's English and Swedish roots and his mother's Czech and German.

Glover Jr. received his unusual name thanks to his parents 'favorite work – William Shakespeare's play Henry V on St. Crispin's Day, the king of England led men to the battle of Agincourt. In that historic battle of the Hundred Years' War, the English were far inferior to the opposing French, and Henry V, to the glory of saints Crispin and his brother, urged the army to recall the great victories. This monologue in literature is called St Crispin's Day Speech.

The second name of Bruce Glover, father of the future actor is Herbert. He did not like the German origin of the name, so he came up with another – Hellion. Crispin inherited that name too. When the boy was five years old, the family moved to Los Angeles, California. This is where Glover grew up. From 1st to 9th grades he studied at Mirman School, in 10th and 11th grades at Venice High School. He graduated from Beverly Hills High School in 1982.

Life on the land of movie stars left a significant imprint on the biography of Crispin Glover – at the age of thirteen, the boy was already in front of the cameras. The actor began his career with such sitcoms as Happy Days and Family Ties. In 1983 he made his debut on the big screen, in the sex-comedy movie My Tutor. This was followed by the films Teachers and Friday the 13th: The Final Chapter, the short film The Orkly Kid from The Beaver Trilogy by Trent Harris. Crispin played a teenager obsessed with the work of Olivia Newton-John, an Australian singer.

Popularity found Glover in his youth-the American was 21 years old when the screens released the blockbuster Back to the Future (1985). He played the role of George McFly-the father of Marty McFly, who travels through time with the scientist Dr. Emmett Brown. It is noteworthy that in real life, Crispin is three years younger than his on-screen son, Michael J. Fox.

For appearing in the second part of Back to the Future, Glover asked for a double fee, and the producers refused. They put footage recorded during the filming of the first part in the movie of 1989. In the credits, the actor was mentioned as follows: George McFly in footage from Back to the Future. At the same time, the real Crispin Glover was replaced with the image of Jeffrey Weissman with make-up on.

Crispin sued the producers for using his face without permission (thanks to his false nose, cheekbones, and chin, Weissman became Glover's twin brother) and for not paying to reuse material from the first part of Back to the Future. After this proceeding in the contracts of The Screen Actors Guild appeared a paragraph prohibiting to do make-up as other media personalities.

Crispin Glover liked eccentric characters: artist Andy Warhol from the biopic The Doors (1991), office worker "dead letters" from Bartleby (2001), the man who talked to rats in the horror movie Willard (2003).

The role of Skinny, the enemy of super-agents Charlie's Angels from the movies under the same title of 2000 and 2003, brought the actor another burst of fame. Initially, the character had cues, but Glover felt that Skinny was unique without a voice. Thus, all lines were excluded from the script.

Glover shared the set of the science-fiction drama Beowulf (2007) with Anthony Hopkins, Angelina Jolie, and John Malkovich, playing the monster Grendel. The actor's face does not appear in the film: motion capture technology was used to depict the beast. The shooting of Beowulf was handled by Robert Zemeckis, the director of Back to the Future.

In 2018, the fantasy television series American Gods, based on the novel of the same name by Neil Gaiman, was released on Starz. In it, Crispin acted as one of the gods – Mr. World.

Hollywood knows not only Glover the actor but also Glover, the director. In 2005, the Sundance festival premiered his debut film What Is It? Actors with Down syndrome played all the roles. The American has invested $150,000 in the project - the proceeds from participation in Charlie's Angels and Willard. Honing the final version of the film took almost a decade. What was initially conceived as a short film and was filmed for 12 days, turned into a full-length movie, worthy of praise from film critics.

The script for Glover's second film It Is Fine! Everything Is Fine was created by Stephen S. Stewart, actor and writer born with cerebral palsy. The man spent more than ten years in a nursing home. The resulting picture is a psychedelic retelling of life from Stewart's point of view. It premiered at the 2007 Sundance festival.

Glover is not only a good actor but also a musician. In 1989 he released the album The Big Problem Does Not Equal the Solution, The Solution Equals Let It Be, which included original songs ("Clowny Clown Clown") and covers. So, Crispin covered "These Boots Are Made for Walkin'" by Nancy Sinatra and "I'll Never Say Never to Always" by Charles Manson. In total, the album consists of 16 tracks.

The actor left a mark in the art of writing. He has written more than 15 books. Glover does not entirely create the story but complements the already famous work. His Rat Catching (1988) is based on Henry S. Barkley's Studies in the Art of Rat Catching, released in 1896, and Oak-Mot (1989) is an interpretation of the 1868 novel of the same name.

Glover's works are born during reading: he leaves notes on the margins of the book, which are then harmoniously woven into the narrative. This method allows him to create a new literary masterpiece: for example, the ending of his version of "Oak-Mot" is significantly different from the original.

From 2007 to 2008, Glover was mesmerized by Amber Heard, his partner in the movie Drop Dead Sexy (2005), then fleetingly with models Vanessa Marano and Mindy Lacca, actress Mara LaFontaine.

Since May 2012, model Sandra Shelley has been accompanying the actor. In 2018, the press still published their joint photos, including those posted on Glover's Instagram account.

Despite an active personal life, at his age, Glover does not have a wife or children.

Crispin Glover's net worth is estimated at $3.5 million. In February 2019, Glover completed filming for his third movie the Untitled Crispin Hellion Glover Project, starring himself and his father, Bruce. There is no information about the premiere date yet.

Now Crispin continues shooting the second season of the series American Gods. Glover is among the main cast.