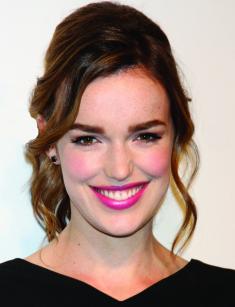 In mid-July 2018, fans of the superhero television series Agents of S.H.I.E.L.D. exhaled with noticeable relief. Their favorite serial film, the plot of which is the pursuit of a good goal – the fight against crime, was extended for the 6th season. However, the authors did not dare to torment loyal fans further, announcing that to be the seventh after four months. All the same recognizable actors, among them beautiful Elizabeth Henstridge in the main roles.

Elizabeth Frances Henstridge (it is the full name of the actress) was born in Sheffield in 1987, the day that was painted in mourning colors in the calendar 14 years later, not only in the United States but also around the world on September 11.

Her parents, her mother was a housewife and her father was a businessman, her family dreamed that their daughter mastered a noble medical profession and helped the needy. But the girl wanted to be on the set or the stage from an early age.

Following the dream, she graduated Meadowhead School and later King Edward VII School, first became a student of the University of Birmingham, and then continued her education in the prestigious East 15 Acting School. In the end, she moved to Los Angeles.

The star of TV screens wants to show her followers pictures of childhood, accompanied by funny comments on the social network "Instagram." For example, among other photos, there is one where little Elizabeth holds the hand of Daisy Duck and there is a statement that she adhered to fashion trends from such a young age, her colorful leggings matched her hairband.

By the way, as for her relationship of the blood with the Canadian actress Natasha Henstridge, it is known that women are only namesakes.

The acting career began with the filming of a short film Easy Under the Apple Bough in 2010. The girl had to turn into the daughter of a farmer, who violated the plans and agreement of her father and the traveler, who turned to the family for tools for his broken motorcycle. Then there was a short time film work And the Kid.

Elizabeth starred in two episodes of the series Hollyoaks. She had the secondary role of Emily Alexander. In 2013, Henstridge got into a multi-episode film that made her a real star and a favorite of admirers of the Marvel Cinematic Universe – Agents of S.H.I.E.L.D., where she expanded her acting role to Jemma Simmons. She does not think of leaving Agents of S.H.I.E.L.D.

"The biochemistry expert. She's young and hungry and she's a wonderful woman. It is funny to play her because she's smart, focused and curious and she doesn't apologize for it. She has a wonderful relationship with Fitz. They complement each other" - Elizabeth described her character in an interview.

However, it is not the only contact with "Marvel," there was a place for voicing Jemma Simmons in the animated movie Spider-Man vs. The Sinister 6 in her creative biography.

Also, there is a collaboration with Sylvester Stallone in the movie Reach Me in the filmography of the celebrity. Rocky said that he was incredibly proud to be part of the project because it was the best drama film, in which he starred in the last few years.

In addition to her stage activities, the actress pays special attention to helping people, in particular, she supports the charity organization Smile Train, which is engaged in correctional operations for children (popularly called "cleft lip").

It is not known about the personal life of the slim star ( her height is 5,3 feet (163 cm), weight 116 lbs (53 kg) until the appearance of Zachary Abel, the popular American TV series actor. But, the performer of the notable roles in the movies Make It or Break It, Criminal Minds and even in the cult sitcom The Big Bang Theory has sincere and real feelings to Elizabeth.

The couple does not hesitate to show their emotions to each other on their pages on social networks. For example, on the birthday of the beloved, which is in September, the celebrity published a joint picture, accompanied by a touching signature in 2018:

"Happy birthday to the man, who inspires me every day with his passion, perseverance and jokes. He fills every second with laughter and pure, unfiltered joy. How much did I know 6 and a half years ago. I know much more now."

The man does not lag behind his chosen one in expressing his love:

"You're my one and only, my best friend and my queen, you're the first and last person I'll ever look at."

They often travel, spend time with friends, coming up with fun surprises for them on holidays and "educate" Maggie, the miniature dog, they love to dress up their dog in a variety of clothes. Elizabeth often takes her dog to work.

Henstridge, as mentioned above, has not gone anywhere with a firmly held role in Agents of S.H.I.E.L.D., it is stated that her expert on biochemistry will please the audience at least for the next two years. At the end of January 2019, the long-awaited first teaser trailer for the sixth season was released.

Elizabeth does not stop posting photos from the set, as well as from behind the scenes, does not spare kind words for close friends and colleagues, including stylists, makeup artists and hairdressers on her cheerful "Instagram." She also dedicated a separate post to departed inimitable and great Stan Lee.

The girl willingly puts pictures from the red carpet on her profile, where she shines in unthinkable dresses suits but she does not show her chic figure. The only "intimate" publication is a touching elderly couple in bathing suits on the beach was published by mid-February 2019.

At present, Elizabeth's net worth is estimated at $3 million.