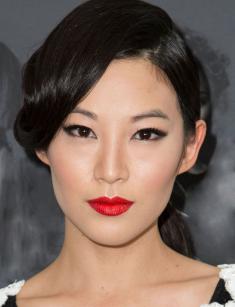 Arden Cho is a model, and singer and actress. And the young woman is very successful in all three directions. Fans of the series know her on the series Teen Wolf. People, who are not indifferent to the "singing" art, probably heard her singles and covers, for example, the hit Call Me Maybe of Carly Rae Jepsen.

And the organizers of the beauty contest Miss Korea in Seoul were disappointed, advising the participant to turn to a plastic surgeon and she posed for Vogue, Nike and Reebok successfully without the intervention of doctors.

Young Nim Kang and Sang Ho Cho were parents, Koreans by nationality in the middle of the last summer month of 1985, on the 16th, in the Northern part of Texas, in a city with the sonorous name Amarillo. The girl was called Arden Lynn.

She spent her childhood in Dallas and her teenage years in Minnesota.

"I was hospitalized twice when I was a child. I was just pushed off a bus once. And I had two teeth knocked out. My whole face was cut. It was bad. It took me six months to recover completely", – Arden shared the sad facts of her biography.

Also, she did not have positive memories of school time. She was again subjected to physical violence for being "herself," or somewhat – Asian at the age of 11. As she grew older, Cho was engaged in what is called everything: choreography and martial arts, gymnastics, painting, music, playing the cello and piano. She often participated in competitions on the pronunciation of words by letters.

The Apple Valley High School graduate conquered the University of Illinois at Urbana-Champaign easily, graduating with a degree in psychology thanks to the natural craving for knowledge, encouraged by adults. The girl had an interest in stage acting. When she was a student, she even began to take the first lessons of acting.

The Korean tried her hand in the fashion industry before getting to the set. In 2004, winning a beauty contest in Chicago, the winner participated in Miss Korea in Seoul, where she heard the fatal words about the surgical change of the external data. The girl refused.

And she did not lose. Her non-standard facial features attracted the attention of the developers of the cosmetic brand Clinique, then Nike and Reebok after six years. She was a model of Alexander McQueen and Apple. She was published in fashion magazines Vogue, Nylon and Purple Fashion.

She willingly publishes family photos on her page on "Instagram." For example, she posted a collage of pictures from different years with her beloved younger brother Jason, joining the challenge on January 15, 2019.

Cho's acting career began with the comedy-romantic film The Break-Up, where she had the role of a guest at a VIP party. Then she starred only in short films; except episodes in the series, her filmography consisted of almost a dozen short films before the fantastic movie Mega Python vs. Gatoroid from 2008 to 2011.

In 2011, the Korean woman was offered a small role in the series Pretty Little Liars. And after two years She was regularly in the movie Teen Wolf, which brought her enormous popularity, she was in tandem with Tyler Posey the main character of the story about the people, who become werewolves after being bitten by a mysterious beast.

In 2016, on Cosmonautics day, Arden posted a video on Youtube, where she said that she would not be removed in the 6th season.

In addition to cinema, one of her main hobbies is music, her solo debut album My True Happy was released in January 2013. She also has many singles in duets with other musicians. For example, in 2018, a joint composition with Jason Chen was released.

Of course, the personal life of a girl, whose beauty is recognized by popular fashion magazines and leading clothing companies, remains under the scrutiny of journalists, who want to know the details. The media attributed her affairs with colleagues repeatedly.

Her first guy was considered Dylan Sprayberry, who also participated in the filming of Teen Wolf. The beginning of the rumors was the general pictures and staying together at social events. For example, in the summer of 2014 at the MTV Video Music Awards, after which the correspondents decided to ask Arden about her feelings to the young man.

People started talking that her heart is occupied by Ryan Higa, who is a comedian, a video blogger and a YouTuber. However, there was no evidence of it on both sides.

Now you can find a lot of joint photos with this guy on "Instagram" of the actress, which show only their friendship. It is known that Cho has no children and no husband at the moment.

In the spring of 2018, a dramatic film The Honor List with the participation of Arden was released, the film is about three girls, who decided to realize the dreams and desires of youth when their close fourth friend was still alive. Cho appeared in the image of Emily, who struggles with drug addiction, from the 3rd season of the series Chicago Med the same year. Arden Cho has maintained an estimated net worth of $600 Thousand.

The actress actively shares numerous photos of both working days and weekends with her subscribers on her accounts on social networks. The publications in mind-blowing outfits are replaced by pictures in swimsuits of all kinds of styles and colors (merged red and green, a black and mixed bikini, white with ruffles).

Cho does not forget about the modeling business, agreeing to fashion advertising of photo shoots periodically. She is also a general director and co-founder of the brand Leonard & Church and the "mother" of the charming dog Chewy, who has a separate profile on "Instagram".

There's no exact information about Arden Cho's net worth at present time.