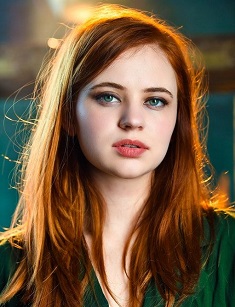 Many Hollywood stars started young into their career. One of them is Sierra McCormick. Gaining recognition at a younger age is quite an achievement for her. She belongs to the list of Hollywood celebrities who achieved fame below twenty years of age. She is a well-known American actress and a delightful gift to the entertainment industry.

Sierra McCormick was born on 28th October, 1997. The role that made her noticeable among audience was of Olive Doyle, whom she portrayed for a Disney Channel Series called “A.N.T Farm”. She was a participant in the quiz game show called “Are You Smarter Than a 5th Grader?”. It was due to this show that she got her acknowledgement in media as well. Her other prominent role was of Lilith which she had done for blockbuster series Supernatural.

On October 28th, 1997, Sierra McCormick was born in Asheville, North Carolina. In a short span of time after her birth, the whole family transferred to Los Angeles to start a new life. Since childhood Sierra was into acting therefore she joined “The Corsa Agency” in Los Angeles. She had a close knitted relationship with her mother throughout her growing years. She believes that her parents are her major support system. Her younger sister’s name is Kayla. She is very close to her younger sister as well.

Just like many stars, Sierra had her dose of disappointments especially when she was just starting. Less people know the fact that her beginning auditions did not go well and she almost took this to her heart. She was rejected several times. However, she kept on trying because of her passion to become a Hollywood star.

It was after being a part of The Corsa Agency that Sierra understood how deeply she enjoys acting and how serious she is about getting into the entertainment business. The first role she landed was of a guest appearance in a television series called “Till Death” (2006). At that time Sierra was only 9 years old. During 2007 she was lucky enough to participate in the second season of a quiz game show named “Are You Smarter Than a 5th Grader?”. She actually went ahead and beat thousands of competitors to win a seat in this famous game show. This proved she didn’t only have the talent but the wits as well.

Sierra performed a guest role in the worldwide blockbuster Disney Channel series “Hannah Montana” in the episode named “Welcome to the Jungle”. This break actually helped her gain recognition after acting beside other famous young stars. It was during 2011 that she was offered another role in one of the Disney Channel series named “A.N.T Farm”. She grabbed the opportunity and gave her best in the audition. The panel was captivated by her speaking style and chose her for the role.

Sierra McCormick is a complete family person. Currently she is living in Los Angeles, California along with her parents and sister Kayla. Because of her fondness for pets, she took part in the PETA advertisement campaign with the dog she owned named Annie. The ad’s main focus was to promote the adoption of shelter animals.

McCormick is a beauty with brains. She has been bestowed with a wonderful personality that reflects through her physical appearance as well. Her excellent physique and her pretty blond locks increase her persona to another level. Her height is approximately 5 foot 2 inches. Since she had started her career at a very young age, most of her time was spent in auditions and filming that there had been no news about her love life.

She is quite a private person so even if she had an affair with somebody else she has never disclosed it in front of the media. Her social media accounts like Instagram, Facebook and Twitter contain massive amount of followers.

Sierra has always maintained a good reputation in front of media and fans. She has an image of a successful and self-satisfied person. She is such a responsible person who makes an extra effort to protect and provide for the ones she loves but in return she demands their devotion and respect as well.

Having started young, she sure gained a lot of accomplishments under her name. In 2007, Sierra McCormick won the “Family Television Award” for starring in the reality show “Are You Smarter Than a 5th Grader?” (2007). She portrayed her role so well that she left a lasting good impression to the audience. During 2015, she was nominated at “Fright Meter Award” for best supporting actress category for her role in “Some Kind of Hate” (2015). Unfortunately Sierra did not win this award.

In 2012, she shared a “Young Artist Award” victory with Skyler Gisondo, Tucker Albrizzi, Jake Johnson and Sage Ryan for best performance in a DVD Film – Young Ensemble Cast for her role in “Spooky Buddies” (2011).

Sierra McCormick is a role model for all the children out there who are aspiring to be a Hollywood star. She is a real portrayal of “dreams do come true”. She inspires youth through her hard work and dedication. She is one of the youngest renowned Hollywood actresses with an annual salary of $117,647. It is believed that in 2016 her net worth was around $1 million. With her talent, brains and charming personality, we won’t be surprised if we’ll be seeing more of her in the future.