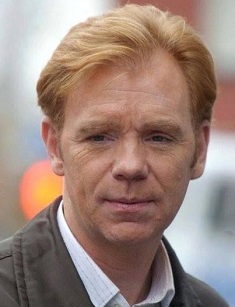 David Caruso is a famous American actor and producer. He is well-known for his appearance in films and TV series such as An Officer and A Gentleman, First Blood, Twins, Kiss of Death, ABC's NYPD Blue and CBS' CSI Miami.

David is of Irish and Italian descent born on January 7, 1956, in the most residential neighborhood of Forest Hill, Queens, New York. Both his parents – Joan and Charles Caruso – were not involved in the showbiz industry. His mother was a librarian while his father worked as an editor of a newspaper and a magazine.

Everything was not so easy for David as he was forced to live without a father at the age of two. Despite this, he was able to graduate in high school last 1974 from Archbishop Molly High School.

Caruso’s first job probably helped him build his career. He was once working as a cinema usher where he was able to watch over 80 movies a week. According to him, he and his co-workers sometimes reenact the scenes of some of the movies that they have watched.

In the early 1980s, Caruso started his acting career when he first appeared as Danny in the 1980 movie Getting Wasted. He didn’t slow down and continue to appear in An Officer and a Gentleman film where his acting as Topper Daniels gave him a showbiz break. After his role in his previous movie, he was able to qualify for a supporting role in movies First Blood (1982), Blue City (1986), China Girl (1987) and Twins (1988).

Caruso was not only working on some roles in movies but also acting roles in some TV series. He portrayed Tommy Mann who is the leader of the street gang in the NBC’s Hill Street Blues drama series from 1981-1983. On 1984, a year after his first TV series role, the TV series The First Olympic: Athens 1896 was aired where he portrayed the role of the American Olympian James Brendan Connolly which also appeared for two episodes in the renowned Crime Story series.

In 1986, Caruso also got into the music industry by appearing in the music video of "Voyage, Voyage" by Desireless.

After a decade, Caruso was able to maintain his supporting role presence in movies King of New York, which was released in 1990 and Mad Dog Glory, released in 1993. He played a police officer in both movies. His role in the 1991 movie Hudson Hawk showed his unique way of internalizing the role given to him. Since he will portray a mute character named Kit-Kat, he applied it in the set by not talking to anyone else. This characteristic showed Caruso's real skill in acting.

His hard work was rewarded when he received a major role in NYPD Blue, a police procedural TV series. He portrayed John Kelly who was a detective in the said series. His acting made him a winner of the Golden Globe Award and named him as one of the six new stars to watch in 1993-1994. Despite this achievement, Caruso shocked the whole TV world after his decision to leave the series due to the fact that the management wasn’t able to respond to his desired raise. This decision of his was named as one of the biggest blunders by the TV Guide.

After taking that massive risk, Caruso was unable to pay it off right away. Critics swarmed his performance in both Kiss of Death and Jade with negative reviews. Also, both movies weren't able to attract an audience which certainly leads to poor box-office takings. His nomination for the Golden Raspberry Award for Worst New Star for his performance for both movies added a slap for his rising career.

Caruso moved to TV series acting after the dreadful result of his movie appearances. He started getting work again for a 1997 CBS law drama series Michael Hayes, which only lasted for a single season.

In the year 2000, Caruso was looking for a major comeback after having a supporting role in the film Proof of Life which led to him landing a lead role in 2001 for the movie Session 9.

2001 was probably the best year for Caruso after obtaining a role in a new TV series CSI: Miami. This is considered as his first successful role since his departure from NYPD Blue. He was able to establish himself as police lieutenant Horatio Caine. His episode-opening bit of fiddling trademark with his sunglasses while making a one-liner became a signature bit even for people who'd never seen the show.

This breakout role introduces him again not just to the audience but also to other celebrity. His role as lieutenant Cain gave him an interview with the famous actor and comedian Jim Carrey in an episode of the Late Show with David Letterman last March 2007. Carrey even impersonated Caruso's character. His intense close-up to the camera, raspy voice and the sunglasses technique was incredibly portrayed by Carrey which even Caruso himself was amazed.

Even though CSI: Miami was canceled in 2012 after 10 seasons, this TV series was able to save Caruso's drowning career. It made him as the first actor to appear in all four CSI programs in the same character and it is his first time to appear in all 232 episodes of the said series.

Aside from his acting career, Caruso was also a well-established businessman. He is the founder of DavidCarusoTelevision.tv and LexiconDigital.tv. He was also the co-owner of a clothing store in South Miami – Steam of Sunset.

Caruso and Liza Marquez, his former girlfriend, have two kids together namely a son Marquez and a daughter Paloma. He and his second wife, Rachel Ticotin, have a daughter together named Greta. His name was tainted when he was accused of being a fraud, breach of the settlement and emotional distress by Marquez in April 2009.

A month before that case, a woman was accused of stalking Caruso. The woman was an Austrian who tried to flee and escape the charges against her but later, she was deported to Austria where she was in custody for the trial.

Despite his roller-coaster career, David Caruso was able to win some notable awards. He won a Golden Globe Award for his NYPD Blue role as John Kelly. Other than that, he was also nominated for a Primetime Emmy Award for Outstanding Lead Actor in a Drama Series. His role in the film Proof of Life also gave him a nomination in Blockbuster Entertainment Award for Favorite Supporting Actor for Suspense Category in 2001.

As a result of his successful acting career in TV show CSI: Miami and films such as Hill Street Blues and Twins, David Caruso was able to obtain a whopping net worth of $35 million. His film and show production career and other businesses also add to his total net worth.