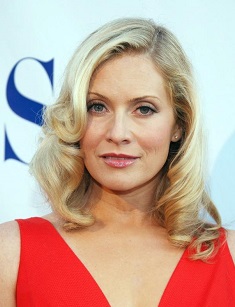 Emily Mallory Procter known by her industry name Emily Procter is an American actress. She was born on 8th October, 1968. She is renowned for her work in political drama “The West Wing” (2000-02, 2006) as Ainsley Hayes which was aired from NBC and police procedural drama “CSI: Miami” (2002-2012) as Calleigh Duquesne which was aired from CBS. She also did couple of episodes as a guest appearance in crime drama “White Collar” from USA network. Her role as FBI special agent “Amanda Callaway” got a lot of appraisal from viewers. She is a well-known model for Charriol.

Emily was born in Raleigh, North Carolina and was adopted as a baby by a general practitioner named William Procter. Her mother name was Barbara Jones, who was a housewife and worked as a volunteer. Her parents decided to part ways when she was only three years old. Her older brother name is Whit and like Emily he was also adopted by her parents.

In 2006, her high school Ravenscroft School bestowed her with “Distinguished Alumni Award”. Later she joined East Carolina University for majors in journalism and dance. At ECU she joined “Alpha Delta Pi” sorority as a member. After graduation she joined the Greenville CBS affiliate as a television weather anchorperson.

Before graduation Emily had been able to get minor roles in films like “Cameron Crowe” and sports rom-com “Jerry Maguire” (1996). She also had been co- starred with Chris Cooper and David Schwimmer in “Breast Men” (1997), even before her graduation. She got her authentic entry into acting world through her weather forecasting career. Projects started to come her way and soon she found herself travelling to west for Los Angeles. While being at LA she joined an acting school for whole 2 years. Her father helped her throughout by funding her study.

Los Angeles proved to be lucky for her as she was rapidly offered roles on television sitcoms and dramas. She made a guest appearance as Lana Lang in “Lois & Clark: The New Adventures of Superman” (1996) for ABC superhero drama. In 1997, she made a short appearance as Mavis in movie “The Duke of Hazzard: Reunion!”. Later in 1999, she acted in a drama named “Body Shots” as Whitney Bryant.

Emily had a great opportunity to work as a guest appearance in worldwide known blockbuster sitcom series “FRIENDS” by NBC. She performed as Annabel who was a fantasy lover of Joey Tribbiani (Matt Leblanc). The episode was named “The One with the Breast Milk” and was aired as second episode of the second season in year 1995. She was casted in 2000 for a role of Associate White House Council named Ainsley Hayes in a famous political drama “The West Wing” by NBC. The series went on air from 2000-2002 and later in 2006. Emily had a prominent recurring role which was applauded by audience.

During 2007, she had a chance to take part in “Live Earth” by reading an essay content by Michelle Gardner- Quinn. Michelle, at that time, was studying at university of Vermont.

She was offered a recurring character in 2013 for final two episodes of fourth season of a crime series drama called “White Collar”. This drama series was aired by USA Network. Her role was of a FBI’s white collar Crime division head named Amanda Callaway.

An important element of Procter’s personal life is her relationship with musician Paul Bryan. They have been seeing each other since 2008. Their daughter Philippa Frances was born on 8th December, 2010. During her pregnancy she was shooting for 9th season of “CSI: Miami”. Since her regarding role didn’t portray a pregnant woman therefore she had limited appearances in the whole 9th season. Procter was signed as a guest judge for Home and Garden TV show named “Summer Showdown”.

She is a sports person who loves to participate in marathons and triathlons. She is very passionate about poker and has taken part in a poker tournament designed especially for celebrities. Procter’s interest in music inspired her to make her own band. She is a front singer of 80s cover band called “White Lightening”. Later the band name was changed to Motion. Emily does volunteer work with “Young Storytellers Program” and “Al Saints Episcopal Church” soup kitchen located in Beverly Hills. Along that she also actively takes part in helping out homeless shelters.

Emily has a great interest in construction work including interior decoration and antiques collection. This fondness of her is visible through her 1921 Spanish styled home in Los Angeles. She has also designed one of her friend’s houses in Saint John, U.S. Virgin Islands during WGA strike and has done the interior décor for Kenny Chesney’s home in Malibu. Procter’s hobby is to collect bugs.

Emily has done many characters in TV shows but she has also performed various parts in a number of movies like Leaving Las Vegas, Barry Munday, Guinevere, Family Plan, Forever Fabulous, Platypus Man and more.

Being a model for Charriol, a volunteer for charity work and an avid interior decoration lover, her net worth in 2012 is estimated to be around $12million.

She has not been awarded for her accomplishments yet but it is very likely to happen in near future because of her dedication and hard work in both acting and singing careers.

Her relationship with musician Paul Bryan started in 2008 and since then it is growing stronger day by day. There is no evidence that the couple is officially married. They have a daughter together named Philippa Frances.