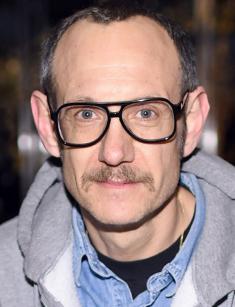 Probably everyone paid attention to the photos of Hollywood celebrities at least once, made on a white background, with a predominance of a red color, naked body, smoke and complemented by vintage eyeglasses. It is a recognizable style of the flamboyant American photographer and music video director Terry Richardson.

The biography of the infamous fashion photographer Terry Richardson began on August 14, 1965, in New York, USA. The boy grew up in a creative family, his father Bob was a famous star photographer, who collaborated with such glossy magazines as Harper's Bazaar and Vogue and his mother Norma was an actress and dancer in Copacabana and Bye Birdie nightclubs. Bob Richardson had schizophrenia and drug addiction.

When Terry was five years old, his parents divorced. He moved to Woodstock, New York together with his mother and stepfather - a guitarist Jackie Lomax and then to the Hollywood district of Los Angeles, where he studied at the local high school.

At the age of16, the guy moved to the city Ojai of the state of California and completed his education at the school "Nordhoff." According to the memories of his contemporaries, Terry often fought, skipped classes, was an uncontrollable and rude teenager. He visited the psychologist's office for a while.

In his youth, Richardson wanted to be realized as a punk rock musician more than a photographer. For four years, the guy played bass in the band The Invisible Government. He was the bassist of many other punk bands in southern California, including Signal Street Alcoholics (SSA), Middle Finger, Doggy Style and Baby Fist. This lifestyle led to the fact that the young man got hooked on drugs for some time.

Terry did the first steps in the work of the photographer in the early 1980s. He was hired as an assistant by a friend of his mother's photographer Tony Kent. Richardson filmed punk rockers from Ohio during performances and other musical events of the city. However, the boy's father reacted to the work of the son skeptically, then Terry threw away the camera and forgot about photography for seven years.

In 1992, Richardson quit music and moved to The East Village in New York City, where he began photographing youth parties and nightclub events. The guy had his first big professional breakthrough here. His pictures were published in the fashion magazine Vibe in 1994. Terry, working in a duet with his father before, finally began to pursue his career on his own.

At the same time, the artist was invited to take part in photography for the spring-winter collection of 1995 of the fashion designer Katharine Hamnett. A provocative photo shoot with pornographic elements (models in tiny skirts and without underwear were in the pictures) determined the future style of Richardson. The man, who is prone to frequent travel, moved to London in the second half of the 90s, where he signed contracts with glossy magazines I-D, The Face and Arena.

Terry Richardson created advertising campaigns throughout his creative career for a number of elite fashion brands and designers, such as Sisley (Josie Maran is pictured in 2001, who drinks milk from a cow's udder and two models, who used cocaine metaphorically in 2007), Gucci (with the model Erin Wasson), Tom Ford ( there are naked chest and hips of the model on the pictures, who holds a bottle of men's perfume), Diesel (the theme of the campaign is a global warming), etc.

The latest shoot Global Warming Ready Print, which won a Silver Lion for Print at Cannes Lions International Advertising Festival in 2007. Two years later, Richardson organized a photo shoot for the fashion designer Marc Jacobs in Harper's Bazaar magazine, where the man is entirely naked, painted with the name of the Louis Vuitton brand and holds a bag in his hands, covering an intimate place.

At the same time, Terry was a member of the creative group The Haus of Gaga, which is engaged in the creation of accessories, props, scenery and stage costumes for the singer Lady Gaga. In 2010, the photographer filmed a pop diva for the covers of Vogue (in a meat dress of the designer Frank Fernández) and Rolling Stone (in a suit from the clip of Alejandro). He also took part in the video of his friend, musician and actor Jared Leto Hurricane.

A year later, there was the presentation of the book of Lady Gaga x Terry Richardson, where 350 color and black-and-white photos of the singer were presented, made by Richardson. The preparations for the release of the photo album was for ten months, the man accompanied Gaga all this time everywhere - at concerts and behind the scenes, in the hotel and at home, in airplanes and clubs.

Being also a talented music video maker, Terry created the most successful music video of the pop singer Miley Cyrus of the composition Wrecking Ball. A completely naked girl is depicted, she rolls on a ball for the demolition of walls and breaking concrete rubble with a hammer. During the first week after the release of the clip on YouTube, the number of views exceeded 100 million, which is a record mark for the entire existence of the video hosting.

Besides, Richardson is the creator of video clips of R. Kelly and Lady Gaga of the song Do What U Want, Beyoncé - XO, Sky Ferreira - Red Lips, Whirlwind Heat - Purple. Terry collaborates and is a friend with many celebrities such as Madonna, Lindsay Lohan, Juliette Lewis, etc.

The personal life of the scandalous photographer is not inferior to the shocking professional. In 1996, Terry Richardson married the model, Nikki Uberti. They were together for three years, the girl had breast cancer and the man began to take drugs, it led to divorce.

The photographer had a relationship with another model and actress Shalom Harlow, then with the former assistant of the politician Hillary Clinton and the civil servant Audrey Gelman. Their relationship lasted for 3 years. The couple broke up in 2013.

A year later, Terry started a new relationship with his longtime assistant Alexandra Bolotow. On March 19, 2016, the couple had children – twin boys Roman and Rex. The couple married in 2017 in Taos, New Mexico.

It is forbidden for Richardson to cooperate with the best glossy magazines from around the world - Vanity Fair, GQ, Vogue, Glamour because of repeated accusations of models of sexual harassment of the photographer during the filming.

It is not yet known whether the boycott will end in 2019 or will continue for an uncertain term.

Now the man spends a lot of time with his family, leads his microblog on "Instagram." The latest professional photos of Terry you can see on his official website. Terry Richardson has a net worth of $8 million.