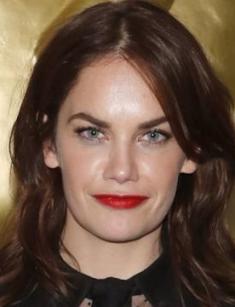 The English actress Ruth Wilson earned the first fame in Great Britain and then moved across the ocean to reach a new level of recognition. She has won the Golden Globe for Best Actress – Television Series Drama and continues to develop her career in series and full-length movies.

The future artist was born in Ashford, Great Britain, and spent her childhood in Shepperton. The girl’s mother, Mary, was a public employee, and the father, Nigel, was a bank investor. Ruth and her three elder brothers, Toby, Sam, and Matthew, were brought up according to Catholic traditions.

Wilson went to Notre Dame School and continued her education at Esher College.

After graduation, the young woman started working as a model and studied History at the University of Nottingham; she finished it in 2003. Further on, Ruth enrolled at the London Academy of Music and Dramatic Art and was ready to appear on the capital theater stages in 2005, with her experience in student performances and TV shows.

People began to talk about the actress after the mini-series Jane Eyre (2006), where she got the lead part. Although Ruth’s work was highly appreciated, she continued to play in small episodes in series for the next several years. The BBC’s Luther about a genius detective of no principles became the long-awaited breakthrough. Wilson personified Alice Morgan, the asocial wonder kid and the professor of astrophysics.

In 2014, the American series The Affair starring Dominic West was premiered. The project brought the woman the Golden Globe. Since that time, the artist’s filmography has been expanding every year: I Am the Pretty Thing That Lives in the House (2016), Dark River (2017), The Little Stranger (2018).

In 2018, one could see Ruth in the mini-series Mrs. Wilson based on her grandmother’s biography. The BBC drama tells the story of Alison Wilson, the wife of the MI6 officer and writer Alexander Wilson. After her husband’s death, Alison discovers that the man had another family and lived a double life.

Fans are greatly interested in the actress’s personal life; she gives no comments about it, so journalists make up a boyfriend out of every man Ruth appears with. There were many photos of Wilson and Jake Gyllenhaal, so the rumors about their romance spread quickly.

Indeed, when the artists participated in Broadway’s Constellations, they started going out together and holding hands on a red carpet. Whether the relationship existed or not, it ended in 2015.

Ruth Wilson has no Instagram page. Although the woman is slim and attractive, she is not eager to show her half-naked body in photo shoots. As the actress mentioned in an interview, she was going to leave the country for a while after the series The Affair: it felt awkward to know that people had seen her in many bedroom scenes.

The series His Dark Materials on ВВС/НВО is one of the most expected premieres of fall 2019. It is the screen adaptation of the novel by Philip Pullman. Ruth plays one of the main characters; James McAvoy became her stage partner.

Besides, the news about Jude Law’s plans to produce the screen version of Deborah Davis’s novel has come. The actress will play the main character; the project is on the pre-production stage now.