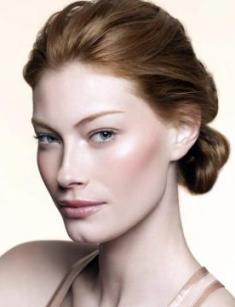 Alyssa Sutherland is an Australian model who has participated in many international fashion events; she is also famous for her roles in the Hollywood comedy The Devil Wears Prada and the iconic series Vikings.

Alyssa Sutherland was born in Brisbane, Australia, in 1982. There is no bio information about the actress’s mother or father, background, education, or early interests in the media.

Sutherland debuted as a model in 1997 when she participated in the competition organized by the Girlfriend magazine. The victory marked the first step in the fashion industry. On the other hand, the young woman’s success seemed to be predetermined thanks to her physical characteristics: her height was 5.91 feet (180 cm.); her weight was 143.3 lbs. (65 kg.). Soon, Vogue Australia noticed Alyssa; she began to appear on its cover regularly.

Following the great start, Sutherland continued to work hard. Harper’s Bazaar and Elle printed her pictures; Bulgari, Calvin Klein, Chanel, and other popular brands employed her as their spokesperson. However, one day, the model felt an urge to do something different and decided to conquer the world of cinematography.

Alyssa tested her acting abilities in the commercial for the Flake Girl chocolate bars. The plot was somehow similar to Cadbury’s video: the main character enjoys chocolate while riding a cabriolet; it is raining hard outside. This commercial made Sutherland recognizable among TV viewers.

Soon, Cadbury hired her for the Keep Cadbury British commercial. Alyssa became popular among the Australian, and movie makers noticed her, finally.

The full-fledged debut on the screen happened in the series Law & Order: SVU. Seven years later, Sutherland had an episodic part in The Devil Wears Prada; the collaboration with the top celebrities Meryl Streep and Anne Hathaway was pleasant. The project also starred Alyssa’s colleagues, the models Heidi Klum and Gisele Bündchen.

Since that period, Alyssa’s career has been developing actively. She received a part in the drama Day on Fire and the series New Amsterdam. The latter project portrays the NYPD homicide detective John who has lived for 400 years; the only way to turn into an ordinary man without immortality is to meet the real love. The series starred Nikolaj Coster-Waldau, who later personified Jaime Lannister in Game of Thrones.

2009 was marked with the horror genre: Alyssa played in Don’t Look Up created by the American, Japanese, and South-African movie makers. As the story runs, a movie crew accidentally sets free a mysterious spirit.

Three years later, fans could enjoy the artist’s acting in the top-grossing drama Arbitrage. Richard Gere personified the main character, the billionaire who cannot choose between his wife and lover. More than that, he is close to bankruptcy and keeps trying to save his business.

Alyssa Sutherland’s filmography is not as impressive as her modeling career so far. The woman’s bright appearance – red hair and inward slant of the eyes – helped her gain the part of Aslaug in the historical series Vikings. The project starred another Australian actor, Travis Fimmel, and the Canadian actress with the Ukrainian roots Katheryn Winnick. Vikings has been the most significant project in their filmographies by now.

In 2012, the model married her long-time boyfriend, the producer and director Laurence Shanet. The wedding ceremony was held in Thailand. The newlyweds settled in New York, but their happiness did not last long: they divorced the next year. There was no children in this family, so it was a relatively easy break-up.

Since that time, the actress has given no comments about her relationships. One can find only the posts about work or friends on the woman’s Instagram page.

Alyssa Sutherland is known for her unusual beauty; her eye shape is called cat-like. The 37-year-old model has had no plastic surgery; she prefers to use natural products and cosmetic medicine.

The beauty is often said to be related to the actors Donald Sutherland and Kiefer Sutherland; however, the same second name is the only thing uniting them. Some fans believe the artist bears some resemblance to the Russian actress Svetlana Khodchenkova and the American star Olivia Wilde (The O.C., House).

The role in the highly popular project made Alyssa Sutherland a demanded actress. Cinematographers appreciated her talent; in 2017, when the woman finished collaborating with Michael Hirst, she signed a contract for the fantastic drama The Mist on the Spike channel. The story was based on Stephen King’s novel under the same title.

Filming the pilots began in summer. However, the project failed to grab the audience’s attention, and only ten episodes were presented. Further on, the actress joined the cast of the horror Blood Vessel and personified the main character; the premiere took place in October 2019.