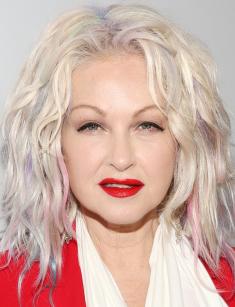 The American pop singer Cyndi Lauper illustrates the proverb about the very little dog that is a puppy to old age accurately. The energetic singer performs Girls Want to Have Fun organic and incendiary at the age of 60, which is a hymn of maiden youth, which became a hit of the 80s. The woman doesn't change herself: she's still bright and bold in life and on stage.

Fred and Catrine Lauper lived in New York. They had three children. The future star of the pop scene was born on June 22, 1953. Her full name is Cynthia Ann Stephanie Lauper. The older sister's name was Ellen and the younger brother's Fred. The girl's ancestors came from Europe. She has Italian, German and Swiss roots.

Cyndi's childhood was not easy: her parents were separated when she was five years old. Her mother found a new husband but it was not smooth. As a result, the woman was a waitress to feed the family.

Cyndi grew up a cheeky, flighty girl who loved music. Her creative nature was eager for freedom and her outfits were appropriate: bright and perky. The girl began to write poetry and play the guitar, which she had from her sister. She attended Richmond Hill High School but she considered it a heavy burden, skipped school and eventually dropped out.

The situation at home was tense; her relation with her stepfather was unbearable. In the book of memoirs, Lauper accuses him of harassment and threats of violence. So the girl ran away from home to nowhere at the age of 17. She lived alone in the woods with the dog for two weeks.

She didn't have enough money for food from time to time and her life without a permanent roof over her head had danger and an unpleasant adventure. She hitchhiked, did odd jobs, sang in bars and clubs. After passing the final school exams, Cyndi went to study at Johnson State College, Vermont.

In the early 1970s, Cyndi began her career as a singer, performing in small bands in New York and performing covers of rock and pop hits. The extravagant singer with a range of four octaves attracted attention and she had the opportunity to try herself in the recording studio.

In 1977, Lauper recorded her first single and experienced her first professional drama at the same time. The girl broke her vocal cords and she could not dream of the singing career. But stubborn Cyndi wouldn't be herself if she gave up. Working part-time as a saleswoman and as a waitress, she works on her recovery with professionals and begins to write her songs at the same time.

In 1978, the singer created a group, Blue Angel. The first album was released in 1980 but the only positive thing that critics noted was the voice of the soloist. The failure loaded musicians in a financial hole and lawsuits of the former manager ruined the team entirely.

However, music reviewers remembered the original sound of Cyndi, so the new personal manager signed a contract of the singer with the Portrait label. In 1983, she released her first solo album. She's So Unusual, which blew up all the charts and brought the girl a resounding success.

This album included ageless hits "Time After Time" and "Girls Just Want to Have Fun." The clip of the last song was recognized by the channel MTV and Rolling Stone magazine as one of the most excellent music videos of the era.

Cyndi Lauper received a Grammy Award as the best young artist for the album and the record became platinum five times. The second release of True Colors (1986) could not repeat this success, although the title song is not silent on the radio to this day.

The collection of the singer has all the main awards that you can dream of in show business: "Grammy," "Tony" and "Emmy." On April 11, 2016, the star of Cyndi Lauper appeared on the Hollywood Walk of Fame.

Cyndi tried her hand at film and her filmography has almost two dozen projects, including feature films and TV series. The first acting experience was the role of a psychic in the adventure comedy Vibes(1988). The artist also got the main role in the film Off and Running (1991).

Both projects had an average rating, not representing anything outstanding, and in general, achievements in the actor's career are incomparable with the successes that Lauper achieved in the musical field. However, an eccentric woman is called as a guest to star in a successful series with pleasure. For example, the actress played a psychic once again, appearing in 4 episodes in the show Bones.

At the time of recording She's So Unusual, Cyndi was dating music manager David Wolfe, whom she met in 1981. He helped her to sign a contract with a recording studio. The girl became a star. But the couple broke up and the personal life of the singer did not add up.

Cyndi met with her husband, actor David Thornton on the set of the film Off and Running in 1989. The lovers dated for two years and married on November 24, 1991. On November 19, 1997, the couple had a son, Declan Wallace.

In 2012, the book of memoirs of the singer was published, where she told her biography and shared her views on modern problems.

Cyndi is an LGBT rights supporter, who arranges performances against gay discrimination. The singer was joined by LGBT stars and everyone, who shares their position at the concert tour True Colors United. The woman organized a shelter for homeless teenagers, who were turned away by their families because of their non-traditional orientation.

The singer performs with many public initiatives and supports the Democratic party of the United States. She cannot refuse to have her position and desire to change the world. The miniature singer (she is 5,2 feet (160 cm) tall and weighs 114 lbs (52 kg)) now continues to radiate energy and creative enthusiasm, as in her days of youth. The celebrity leads the page on “Instagram,” where she puts fresh and retrospective photos and shares the latest news.

On December 6, 2018, Cyndi Lauper took part in Billboard's 13th annual ceremony the Women in Music, which is held by the authoritative music Billboard. The singer received the icon award for outstanding achievements and historical contribution to the development of music and art. They noted not only the strength of Lauper's creativity but also the positive changes that she created in society in social and humanitarian projects. The net worth of the star is estimated at $30 million.

Cyndi continues to practice music as a singer and producer. The woman is involved in the creation of Broadway musicals that bring critical acclaim and commercial success. On July 12-13, 2019, two big concerts of the artist were announced, which will be held in the open air of Los Angeles in the amphitheater "Hollywood Bowl."