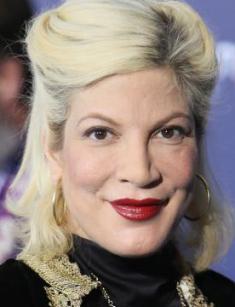 Tori Spelling is an American actress, known for the role of Donna in the TV series Beverly Hills, 90210. Her credentials include dozens of projects. Since 2006, she has produced and written scripts. Tori has recently become a writer. The woman is often in the spotlight due to failed plastic surgery.

Victoria Davey Spelling was born in Los Angeles on May 16, 1973. Her father Aaron Spelling was the wealthiest producer in the United States. Mother Carole Gene "Candy" Spelling is a writer and journalist who also came from a wealthy family. Spelling’s ancestors immigrated to the United States from Russia and Poland. Although Aaron and Candy were from Jewish families, they celebrated Hanukkah and Christmas.

Aaron Spelling made it into the Guinness Book of Records twice as the most prolific television writer and producer in US television history, as well as the owner of the largest house in the world (the total area was 36,489 square feet (3,390 square meters)).

Tori has a younger brother, Randy, who also began an acting career, but soon realized that it was not his vocation. Nowadays, he works as a coach.

Tori grew up in a wealthy family, and the parents gave her anything she wanted. The girl studied in prestigious educational institutions. She first attended Beverly Hills High School, later Harvard-Westlake School, which graduates were Jake Gyllenhaal and Bridget Fonda.

Tori landed the first role in a film when she was six years old. She played in the project of her father, the film Vega$. Of course, Spelling could start an acting career thanks to the influence of her father. Aaron was the executive producer of the series Fantasy Island and The Love Boat, and he cast his daughter for them.

The young actress became famous for the role of Donna Martin in the teen series Beverly Hills, 90210. By the way, it was also produced by Aaron Spelling. But by this time she had been studying acting for seven years, therefore it cannot be said that the girl owed everything to her father's weight. She is talented and was nominated for two Young Artist Awards for this role.

The TV series was so successful that it was renewed annually. As a result, ten seasons were filmed, and it aired for ten years. While shooting in Beverly Hills, 90210, Tori played in feature films: A Friend To Die For, The House Of Yes, Trick, Alibi. In 2001, Tori Spelling appeared in the TV series Smallville, in 2002 in the TV series Less Than Perfect.

The actress also starred in comedies, including Scream 2 and Scary Movie 2. In 2003, Tori got the leading role of the evil drama queen, Carol Cartman, in the movie A Carol Christmas.

In 2005, Spelling appeared in several films, including the comedy Family Plan, the thriller Hush, and the fantasy movie Mind Over Murder. The 2006 comedy series So Notorious deserves special attention because Tori played herself in it.

In 2014, the woman tried her hand at other activities. She became the scriptwriter and producer of the comedy sitcom Mystery Girls. Later, Tori decided to play a leading role in the series. Her colleague on the set was Jennie Garth, with whom they had already worked in Beverly Hills, 90210. Unfortunately, film critics did not appreciate the results of their cooperation. The ratings of the series were low, and it was soon canceled.

Tori Spelling has always felt bad about her appearance. Since childhood, she has dreamed of changing herself entirely, and at the age of 16, she underwent plastic surgery. She came to the filming of Beverly Hills, 90210 after getting a nose job. But this operation could hardly be called successful because, over the years, the nasal septum deviation has become even more noticeable.

At the age of 20, she got breast implants, but a chest wall deformity became even severe. The actress admitted that she expected a different result. Tori has told about these two operations, but experts are confident that they are legion.

For example, cheek implants were inserted to enhance Spelling’s cheekbones, and she regularly gets beauty injections. Her lips have been enhanced more than once. Unfortunately, the woman did not manage to meet the fashion industry standards. Perhaps everything became even worse, but she could improve her personal life, albeit slowly.

In 2004, Tori married actor and screenwriter Charlie Shanian. They had a Great Gatsby themed wedding and invited 350 people. But their marriage did not last long.

While working on the film Mind Over Murder, the actress fell in love with her partner and the leading actor, Dean McDermott. At that time, both of them were married; therefore, they had to go through a divorce to be together.

Dean was married to actress Mary Jo Eustace, and they raised a son. Of course, such a turn of events shocked Tori's parents. The father did not talk with his daughter for nine months.

In 2006, the couple got engaged; they refused to organize a fancy wedding and preferred to be together this day. The couple came to Aaron Spelling shortly before his death. He approved of Tori’s new husband and made peace with his daughter.

After his death, the mother deprived Tori of the inheritance, accusing her of the father’s death. It did not break the actress’ spirit; she began to write books and shoot with Dean the reality show. By the way, her first book “sTORI TELLING” was released in 2008 and became a New York Times bestseller.

The spouses have five children: three sons and two daughters. Their fifth baby was born in 2017, at the time the actress was 43 years old.

At the moment, Tori Spelling does not act in films. Nevertheless, she appears on television, hosting TV programs and reality shows. The woman is also a jewelry designer and has even started her own jewelry line.

In March 2018, information appeared in the media that the police were called to Tori Spelling's house twice. They reported the inappropriate behavior of the actress. TMZ reported that Spelling looked extremely aggressive.

Tori called the police in the morning. She thought that an unknown man had snuck into the house. As it turned out, she mistook her husband for a criminal.

According to reliable sources, she had a tough year, and the woman had a nervous breakdown. Nowadays, Tori feels well, and she regularly posts new photos on Instagram, confirming it.