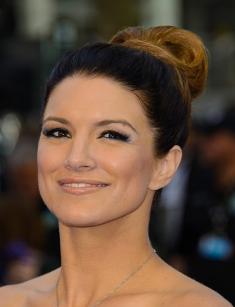 Gina Joy Carano is an American actress who starred in action movies, such as Haywire and In the Blood. Before the woman started her acting career, she had become successful as a mixed martial artist, and fans called her the queen of MMA. However, she did not accept the title.

Gina was born in a suburban area of Dallas, Texas. Her father, Glenn Thomas Carano, used to be a professional football player, and the mother, Dana Cason, kept the house and brought three children. Gina was the second child and had two sisters.

Gina took an interest in sports when she was a teenager. She was a member of a women’s basketball team and won the state championship; besides, the future star was fond of volleyball and softball. Further on, Carano took up martial arts. Initially, she chose Thai boxing to lose some weight: the young woman believed she was overweight.

Gina Carano won 12 out of 14 fights in the ring and made it to the draw once. Thanks to these excellent results, the young talent caught agents’ attention and participated in the first women’s competition in Nevada. Another promising athlete, Leiticia Pestova, was her opponent. Although the expectations were great, the fight was not much spectacular: it took Gina 38 seconds to knock out her rival.

As the woman became a professional athlete, she continued to surprise the audience by her significant achievements as well as a variety of techniques: knock-outs, cutting eyebrows, chokes. Carano got the nickname “Conviction” due to her goal orientation and vigor. Despite Gina’s endeavor, she always had problems with her weight during her sports career: some fights had to be postponed because the athlete’s weight exceeded the existing norms (her height was 5.68 ft. or 173 cm., and her weight was 141 lbs. or 64 kg.).

Sometimes, fight organizers tried to bring the athlete back, and some events were scheduled. However, something was always going wrong: Carano failed medical tests or had no license. In 2016, she was expected to meet Ronda Rousey, but it never happened: Gina could not lose weight to participate in the featherweight division.

In 2006, Gina Carano began her TV career: she participated in the iconic documentary Ring Card Girls based on the true stories; it showed the history of women’s Thai boxing in the United States.

Later on, Carano and another fighter, Lisa King, coached the participants of the reality show Fight Girls. Besides, Gina appeared as “Crush” in two seasons of the popular show American Gladiators with Hulk Hogan, Laila Ali, Alex Castro, and Al Kaplon.

In 2012, she appeared in the documentary I Am Bruce Lee and shared her memories about the legendary fighter; Gina explained how Lee’s professionalism influenced her own career.

Besides, Carano was invited by the producers of the computer game Command & Conquer: Red Alert 3: her image was used to create one of the characters, Natasha Volkova, the Hero of the Soviet Union and powerful special forces soldier.

The athlete debuted in cinematography in 2009: she played in the movie about street fighters Blood and Bone. Her character, Veretta Vendetta, is one of the winners in such fights. The project starred Michael Jai White, Eamonn Walker, and Shannon Kane.

Three years later, the actress participated in the thriller Haywire. The director Steven Soderbergh himself invited Gina: he believed that only Carano could play Mallory Kane.

The athlete personified a former special forces soldier and charming brunette who worked as a killer in the secret intelligence service in America. One day, she fails and realizes she has become the one being hunted. Michael Fassbender and Ewan McGregor also starred in the movie. Bill Paxton played Kane’s father.

The movie was being made for more than a year; it was released in 2011. Critics praised the beginning actress, and Gina was nominated for Critics Choice Awards. However, it was Jennifer Lawrence who gained the prize.

Many directors invite the actress to show her fighting skills. In 2014, the artist participated in the movie In the Blood. John Stockwell insisted that Carano demonstrate the deep psychological understanding of her character, not only the perfect techniques. Gina played Ava who revenges her husband’s kidnapping and managed to illustrate the dramatism of the situation. When the project was finished, the director confirmed that Gina looked brilliant in this role.

In 2015, the actress joined the cast of the thriller Heist about casino robbers who took hostage bus passengers. Gina had the chance to collaborate with Robert De Niro and Jeffrey Dean Morgan. The same year, another movie with Carano, Extraction, came out; Bruce Willis was the artist’s stage partner.

Gina Carano’s personal life has been intertwined with her sports career: Kevin Ross, the professional Thai boxer, introduced her to the MMA world.

The woman also used to date the MMA fighter Kit Cope. When the couple broke up, he blackmailed Gina by her intimate videos; later, he apologized for his behavior. The actress’s latter romance was with the British actor Henry Cavill.

In 2009, Gina Carano was included in Maxim’s Hot 100 list. In 2014, the woman agreed to do a nude photo session for the American edition; fans were excited: they were looking forward to it for a long time.

Gina has her own Instagram page and regularly posts photos with popular fighters and actors. Besides, there are some pictures of the impressive moments of the athlete’s fights.

In 2016, one of the most expected projects of the year, Deadpool, came out. In September 2016, the premiere of Kickboxer: Vengeance with Jean-Claude Van Damme, Dave Bautista, and Gina Carano took place. The same year, the woman personified a sergeant in the series Sergeant X.

In 2018, the actress appeared in the post-apocalyptic movie Scorched Earth and played a special agent who must neutralize the most dangerous murderer in the world. Soon, the movie Madness in the Method starring the actress will be released. 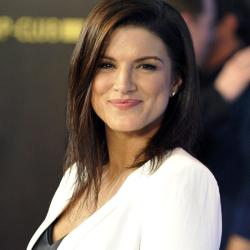