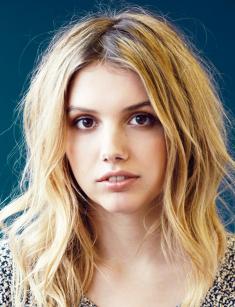 Hannah Murray is a talented British actress whose name is associated with many popular TV projects. The series Skins brought the artist the first success. However, Hannah did not stop at this point and continued to work on other movies and series, such as the iconic Game of Thrones, Womb, and Chatroom.

The would-be star was born on July 1, 1989, in Bristol. Hannah’s were university teachers; they wanted their daughter to have a good education and, ideally, an academic degree. However, the girl dreamed of acting: she fell in love with the theater from an early age. As a teenager, she spent a lot of time watching TV and trying to learn her favorite actress’s techniques, gestures, and mimics.

Hannah Murray was destined to become an actress: as soon as the young woman saw an audition advertisement, she decided to try herself. That decision changed her life dramatically.

It was the audition for the series Skins. Hannah gained one of the lead roles, Cassie Ainsworth, who had anorexia. It was the woman’s way to attract her parents’ attention: the adults were occupied with the newborn son and completely forgot about their elder child.

The project proved to be popular among viewers of all ages. Skins shows many problems relevant to teenagers and grown-ups: dysfunctional families, relatives’ indifference, first love, conflicts with peers, and other life situations.

Murray was brilliant: she felt her character’s pain and despair and her need for warmth. The actress’s talent was noticed: Hannah was often recognized by fans, and new offers from directors followed.

In 2009, the young woman had an episodic role in the popular series Agatha Christie's Marple. The next year, she took part in the psychological thriller Chatroom. A viewer is kept in suspense until the last frame; seemingly innocent contact on the Internet may be dangerous and unpredictable.

The storyline is simple: a group of teenagers meets someone exciting and charming. The young people are glad to have made a new friend. As it turns out, this person is not that simple-minded as it seemed. The teenagers become the victims of the skillful manipulator who is ready to do anything to reach their goal.

Hannah Murray played one of the main characters and collaborated with Aaron Johnson, Imogen Poots, and Daniel Kaluuya. The audience welcomed Chatroom enthusiastically; critics’ opinions were favorable as well.

In 2010, Hannah worked on the movie Womb by Benedek Fliegauf. Even hard-boiled critics were touched by it. It is the story about the nearest future where cloning people was possible. The main character, Rebecca (Eva Green), decides to do that.

The woman lost her lover and decides to clone him; she raises him as her own son. In a while, she realizes that her feelings to her “son” (Matt Smith) are not parental. Hannah personified Monica in this story.

2012 brought the series Game of Thrones. This iconic project became popular all over the globe and made the actress even more famous. Murray’s character, touching and wild Gilly, earned the love of millions. Peter Dinklage, Lena Headey, Emilia Clarke, Aidan Gillen, and other actors became her stage partners.

The same year, Hannah appeared in Tim Burton’s Dark Shadows. It is the master’s typical movie: a lot of Gothicism, drama, black humor, and the duo of Johnny Depp and Helena Bonham Carter. Murray received a secondary role of a hippie girl.

In 2016, the actress participated in the military drama The Chosen by the Spanish director Antonio Chavarrías. Movie lovers appreciated the unusual plot and significant ethic issues.

Hannah Murray continues to work at the theater and often collaborates with famous theater directors.

Hannah Murray prefers to keep secret her personal life; she gives no ground for rumors and avoids talking about her love affairs in interviews. There are some theories that the actor Joe Dempsie who also appeared in Game of Thrones is the actress’s boyfriend. However, none of them confirmed these speculations.

The woman does not seem to be ready for marriage; maybe, she has not met the one.

In 2017, the movie Detroit by Kathryn Bigelow came out; Hannah played Julie Hysell.

Today, Hannah Murray continues to work on Game of Thrones: the final season of the fantastic project is being made. Besides, the actress is likely to appear in new movies soon. Fans can follow the latest news and see the actress’s recent photos on Instagram and other social networks.