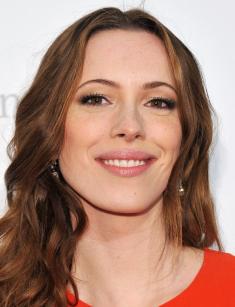 Those who are familiar with the works of the popular directors Christopher Nolan, Woody Allen, and Ben Affleck are likely to remember Rebecca Hall, the tall British actress with a charming smile, swan-like neck, and kind eyes. The artist’s sincerity, intelligence, and uniqueness touch the audience’s feelings.

Rebecca Maria Hall was born on May 3, 1982, into a large artistic family. Her father, Peter Hall, worked as a director and founded the Royal Shakespeare Company; the mother, Maria Ewing, was an opera singer from the United States. Rebecca combines the features of many peoples: the father is English, and the mother has American, Dutch, Scottish, and Afro-American roots.

The parents divorced when their daughter was little. However, the six children including Rebecca continued the family tradition and devoted their lives to art: a theater director Edward, a writer and artist Jennifer Caron, a theater designer Lucy, a TV producer Christopher, and an actress Emma. Rebecca warmly communicates with her parents and siblings today.

The would-be celebrity went to Cumnor House School for girls in East Sussex from 9 to 13 years old. She was a promising student. Later on, she continued her education at Roedean School and became a head girl. Finally, she entered St. Catharine's College in Cambridge to study English Literature.

This is where the young woman threw herself in acting and realized she would like to do that for her entire life. Rebecca participated in the student theater life and joined the Marlowe Society – the Cambridge theater club – to play in several performances with Dan Stevens. She quitted the college right before graduation.

Rebecca’s father assisted his daughter a little: she debuted in The Camomile Lawn, the TV adaptation of Mary Wesley’s novel directed by Peter. The ten-year-old actress personified young Sophie. Ten years later, in 2002, Rebecca started her career with the play Mrs. Warren's Profession. The project received many positive reviews and the Ian Charleson Award.

In 2006, the artist participated in her first full-length movie, the romantic comedy Starter for 10. She personified her namesake, Rebecca Epstein. The project also starred many viewers’ favorites: James McAvoy, Benedict Cumberbatch, and Alice Eve. The story about the love triangle and growing up gained critics’ appreciation and won the Audience Award at Austin Film Festival (2006).

The role in Christopher Nolan’s fantastic thriller The Prestige was essential for Hall whose filmography had been pretty short at that time. The artist had the chance to collaborate with Hugh Jackman, Christian Bale, Michael Caine, and Scarlett Johansson.

The woman personified a noble, elegant, and progressive lady living at the beginning of the 20th century. The role of Sarah brought her people’s recognition and new invitations from popular directors. Woody Allen himself was charmed by Rebecca and gave her a role in the 2008 melodrama Vicky Cristina Barcelona with Scarlett Johansson and Penélope Cruz. The movie got the Golden Globe for Best Motion Picture – Musical or Comedy and the Academy Award for Best Actress in a Supporting Role. Thus, Hall conquered Hollywood and proved to be a person of many talents.

The next year, Rebecca appeared in Dorian Gray, the screen adaptation of Oscar Wilde’s iconic novel. Critics’ and ordinary viewers’ opinions were ambiguous: some plot twists were different from the original or even absent. Hall played Emily Wotton who did not exist in Wilde’s book. Still, this character helped demonstrate Gray’s personality from a different angle; it was a breath of fresh air in the well-known story.

2010 brought the actress the opportunity to try herself in a new genre: she appeared in the crime drama The Town about four friends who were robbers. The lead actor Ben Affleck worked as a director and scriptwriter as well. He gave Hell the leading part without the official auditions: they had only met for a short time.

In one of his interviews, the man told reporters that Rebecca went to New York from London for a day: they were to discuss the project. Affleck wanted the actress to avoid arguing all the time; his wish came true.

Speaking about Rebeca Hall’s filmography, one cannot but mention the Marvel project Iron Man 3 (2013) where she played the secondary character, Maya Hansen. Robert Downey Jr. and Gwyneth Paltrow became the artist’s stage partners. It is peculiar that Rebecca had collaborated with many actors appearing in the Marvel projects, yet it was the only time she took part in one of them.

Rebecca Hall does not like to talk much about her personal life. In 2003-2004, the actress used to date the British actor Freddie Stevenson; in fall 2011, the director Sam Mendes was her boyfriend.

In September 2015, the woman married the American actor Morgan Spector. They had met two years before when they collaborated in the Broadway’s play Machinal.

In January 2018, Rebecca posted a photo on her Instagram: her belly was quite notable. Since that time, the couple has given no information about the baby’s gender or name. In August 2018, the artist left her social network pages.

Nowadays, Rebeca Hall is actively developing her career; her projects are scheduled for several years in advance.

In 2019, Woody Allen’s comedy A Rainy Day in New York will be released. The project stars the young and promising actors Timothée Chalamet and Elle Fanning. Another project with Rebecca, the fantastic action movie Godzilla vs. Kong, will appear in 2020. It is the remake of the 1962 movie under the same title and the comedy Liars (A-E).